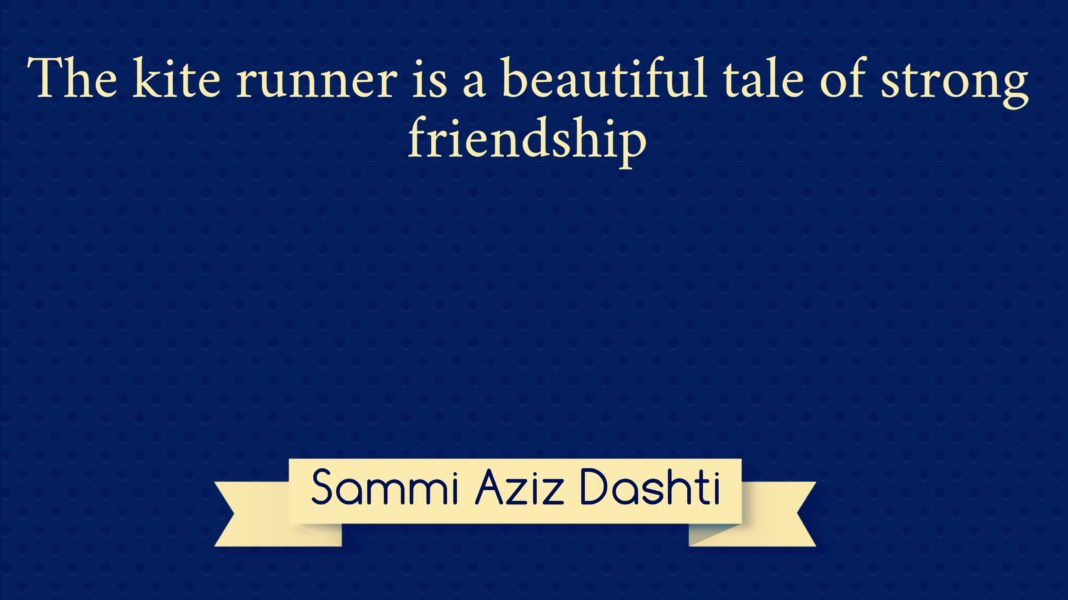 The Kite runner is an incredible piece of writing by the Afghan-American author Khalid Hosseini. It is his very first novel. The book was published in 2003 by Riverhead books.

The story is one of those unforgettable stories that last with you forever. In the novel Khalid Hosseini brilliantly described the story of courage, guilt, betrayal and essentially redemption.

The kite runner is an heart-breaking and astonishing tale of two childhood friends. It shows us the real face of Afghanistan before and after the entrance of Taliban.

The novel is entirely based on the desire for atonement and to be good again. Additionally, the great theme of literature is also essence of the collection.

The story revolves around Amir and his friend Hassan. Both boys were motherless and lived in the same house. Amir was the son of a rich businessman from Kabul, capital city of Afghanistan. Whereas, Hassan was the son of Amir’s father’s servant, Ali.

The story began with a kite running competition which was held in the town and Amir had participated for the competition. However, Amir was worried and even resisted to Hassan for flying kite but Hassan motivated him to go for it.

Amir and Hassan spent the days playing with each other and by sitting behind the pomegranate tree which was there near his house. They usually had fun behind cracked mud walls.

Hassan was expert in flying kite. He could cut the kites even by not looking at it. That is why Amir called Hassan “A kite runner”.

On the other hand, Amir loved to read books. He always used to read his mother’s books and found peace through reading them. Regretfully, Amir’s father did not like to see Amir’s love for books. He wanted his son to be a doctor or engineer. But, Amir used to capture his thoughts in shape of beautiful write ups.

However, the kite running competition began and Amir started to fly his kite. There were a great number of competitors around him. He was nervous and hopeful to win since he wanted to achieve his father’s appreciation and pride.

Proudly, Amir won the competition and got a lot of congratulations. Hassan was very happy for Amir’s win and he went to bring that blue kite for Amir. Howbeit, Amir refused him not to go. But, Hassan beautifully replied, “For you a thousand times over.”

It took a long time but Hassan did not come back. Worriedly, Amir himself went to find him out. Hassan was apprehended by some boys among them one was Assef, friend of Amir. The group of boys were asking for that blue kite but Hassan was not ready to give that because that was Amir’s kite. They made fun of Hassan, his face’s features and called him hazara, a shia muslim.

Woefully, they took advantages of him. Amir witnessed the act but he did not take any step and moved silently from there.

Similarly, when Hassan came home, they both pretended like nothing had happened. After some years when the situations got worse in Afghanistan, Amir with his father moved to America where he continued his studies. There he got married and started a new life.

After a long period of time he realized that he had done injustice with his beloved friend Hassan. He took a decision to apologise to Hassan. But unfortunately, Hassan had died in a bomb blast with his family. After the incident, Amir came to know that Hassan’s son was abducted by Taliban.

He once again went to Afghanistan for the sake of his friend’s son, a friend he could not be fair with. There he saw a totally different face of Kabul. Everything was finished. Just broken streets and collapsed houses remained.

To his misfortune, Hassan’s son Sohrab was with the Taliban. He faced so many unbearable circumstances. But, he did not go back this time and succeeded to free Sohrab from the Taliban.

The story ended with an everlasting lesson of true friendship that how a real friend can leave all of his lifestyle for the sake of a friend and can face a lot of sufferings. One of its main themes is beautifully presented as “for you a thousand times over”.

It was the story of deviation and atonement which will surely last with each reader for years. The kite runner becomes the New York Times best seller after being printed in paperback.

I recommend this book to everyone. You will surly get its benefits after reading it. It is a worthy collection, don’t miss the opportunity to hand over it.