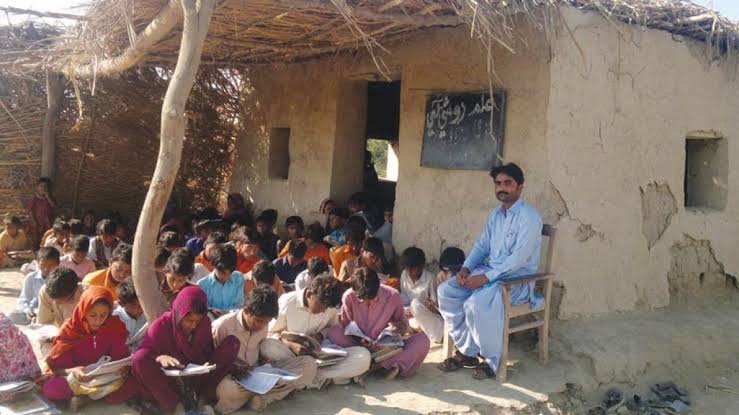 Kech is the second biggest district of Balochistan in terms of population according to recent census and it is one of the hubs of intellectuals. It staggers me to state that multifarious schools whether High, Middle or primary are in miserable state owing to negligence and lack of interest of our representatives.

Moreover, education plays a radical role for grooming students life and make them capable of accomplishing their desired goals but the incumbent government is completely failed to facilitate the students.

In addition, most of the students are deprived of classrooms, furniture, toilets, and clean potable water beside that they are unprivileged  of quenching the thrust of knowledge.

There are numerous reasons for backwardness of education not only in Kech but in entire Balochistan such as lack of infrastructure, lack of interest of representatives, political influence, ghost teachers/schools, incompetent teachers, misusing of cluster budget. The irony is that governmental teachers who get their children admitted to private schools and don’t teach the public school students properly. The competent governmental teachers and lecturers are rendering their services to private schools then how the conditions of governmental schools will get enhanced.

Kech has approximately 56 High schools which are mostly deprived of basic amenities to contribute their share to bring a positive change in the field of education.

On the the other hand, there are some private schools which are providing quality education but the destitute people cannot afford to get admission there.

Furthermore, Kech is known as one of the most important areas of Balochistan regarding knowledge and talent but district Kech multifarious Tehsil schools’ buildings are in appalling condition and Govt Kapkapar School in Dasht is in a deplorable condition, the students are in a rented building and students pay the amount.

Education is one of the fundamental rights that people of the country are entitled under the constitution. The constitution binds the state to ensure the provision of education as a right to people.

According to constitution of Pakistan Article 25-A Right to education “The State shall provide free and compulsory education to all children of the age of five to sixteen years in such manner as may be determined by law.”

Amazingly, illiteracy ratio is on the rise and numerous kids are working in the garages, factories, mines despite child labor has been banned by the government through various enactments.

As Jahangir Jamil an Educationist of Kech believes that until and unless the government changes this abominable traditional system, reforms will not come.

The students/ youths are back bone of the nation but they are deprived of quality education and they are studying under the trees because of lack of class rooms, and sitting on the rugs. There are insufficient chairs which are dilapidated.

Nepolean Bonapart quoted that if you want to zap a nation then sabotage its education, Nevertheless, governmental competent teachers are giving their invaluable services in private schools & centers, due to it many students are mentally distracted and facing sense of frustration and dejection. Kech’s prosperity is linked with quality education.

Government must hold workshops and trainings for the teachers of Kech in order to make them competent to teach phenomenally.

I request the concerned authorities to take some pragmatic and stern measures to resolve the problems of the Kech schools.