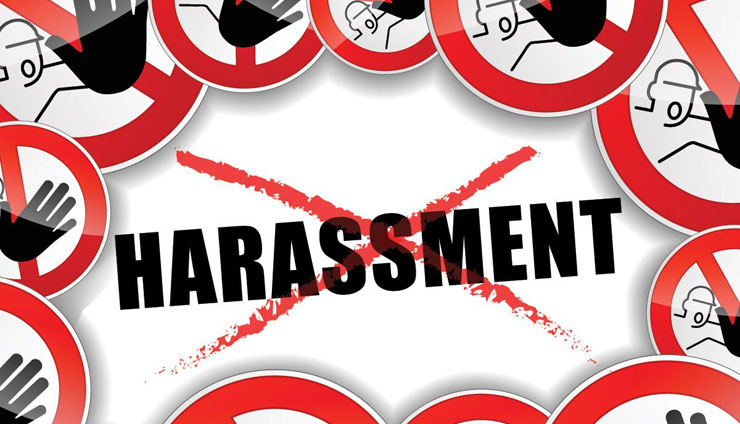 Harassment is unwanted physical, verbal and psychological behavior of violating the dignity of an individual or creating an unintimidating, hostile, degrading, humiliating or offensive environment.

A report confirmed that per year 50 to 70% of women/men go to psychiatrists just to treat the discomfort of harassment. A large number of the women are effected by harassment who neither can be happy nor can be able to do something for the development of the society. This shameful activity occurs when someone makes unwanted remarks or jokes about your race, religion, sex, complexion, age, disability or on any other ground of discrimination, touching, patting or pinching. There are various types of harassment which are usually common in our society that are discussed below.

MEN HARASS WOMEN: Actually, women do face the harassment on daily basis and in worse possible way at various places but more than 70% women and young girls go through this and are harassed at workplaces, homes, public places, transports, educational institutions etc. But unluckily, they rarely raise their voice against this torture because some of them are afraid of the honor, society and the families that will ultimately blame them for any such act of abuse and young girls are not trained or are not confident enough to share the issues. Mothers must educate their daughters about how to face any unwelcome condition.

MEN HARASS MEN: Men harassment cases are also common and lots of men and young boys suffer from unwanted touch, sexual comments, jokes, insistent request, unwelcome sexual invitation or any such behavior resulting the promise or reward undue favors at workplaces. In fact, a large number of children become the victim of sexual harassment or abuses at early ages.

WOMEN HARASS MEN: Mostly, women of sick nature take the advantage of innocent and helpless men or young boys and use them for the fulfilment of their sexual desires. There are such men who may not report such cases because they are afraid of being mocked by the people especially if they are abused or harassed by women. Actually, men consider themselves physically more powerful than women. Such kind of unwanted acts of harassment could hurt their self-esteem and ego; therefore, they neither report nor discuss such matters.

WOMEN HARASS WOMEN: This is also a type of harassment which is not that much common in our society. Mostly, such activities happen when women and girls are working at the places where there is no presence of men. Some women use their colleagues and subordinates for such criminal and shameful activities. There are various causes of sexual violence that include military conquest, socioeconomic, anger, power, sadism sexual pleasure, psychopathy, ethical standards laws, attitudes towards the victims and evolutionary pressures.

The way forward to this problem is that the government must make effective laws for controlling and secondly the administration of the institutions, organizations, public or private sectors have to focus on such acts. If such activities occur, the head of the institution or organization should take action against harassers immediately and strictly. Thirdly, children need to be trained by their parents that how to deal with such situations.