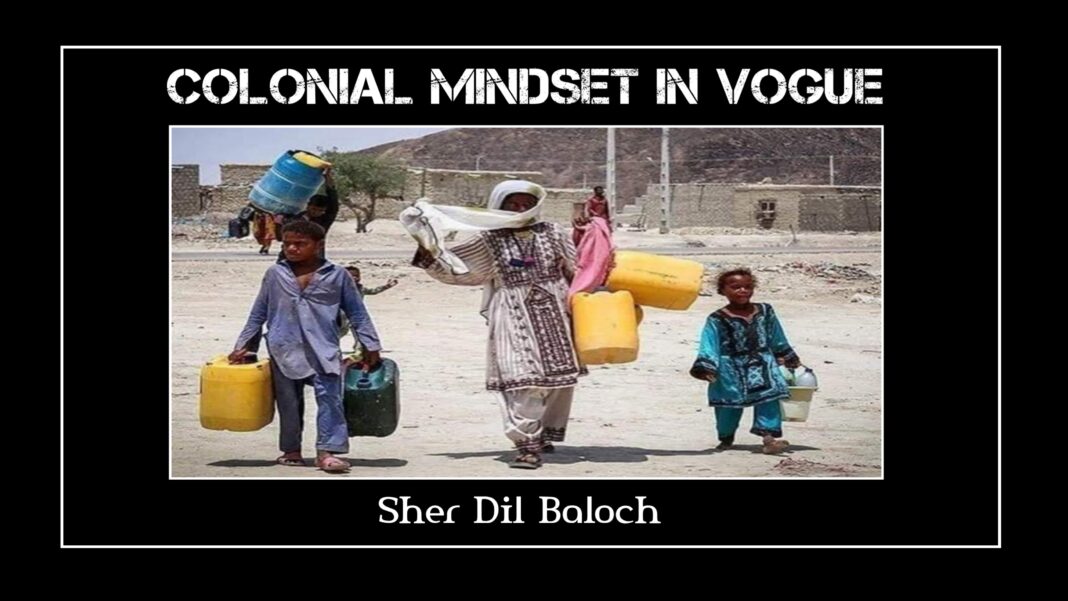 If one knows the difference between Baloch and Balochi, then they might also be aware of the gravest problems which Baloch people are facing since the inception.

The Baloch people have always been treated as inferiors and the province is considered a burden on Pakistan even though vast reserves of natural resources of Balochistan have a huge share in running businesses in Pakistan. The Baloch are defamed as being illiterate shepherds and face discrimination by the elites and bourgeois in the name of feudalism. The elite accuses that these are the feudal lords who never wanted education in Balochistan. Among the accusers are those who select these feudal lords for the top ranks of provincial administration. They make them representatives of Baloch people which lets the power remain in the hands of feudal lords. In a responsible state, freedom of expression, freedom of speech, safety, education, health, and basic facilities for living are the rights of every citizen without any discrimination. It is the duty of a state to look and treat its citizens indiscriminately, but unfortunately when Baloch people raise their voices against enforced disappearances, drug traffickers, cruel administration, and so many other injustices which they face in daily lives, they are forcefully abducted and disappeared from their loved ones.

Sajid Hussain, a prominent Baloch journalist who often wrote about the injustices in Balochistan, went missing in Sweden where he was in self-exile due to threats to his life. Two months later his dead body was found dumped in Uppsala river in Sweden.

Unfortunately, if someone raises voice against abductions, and missing persons then he himself goes missing. If someone becomes a voice for the voiceless, he himself will face the same fate as in the case of Sajid Hussain. Muhammad Hanif, a renowned Pakistani author and journalist stated, “If Baloch people want their children to be safe then, they must not educate them. Because, if they educate them, then they would demand equality, justice and safety for their community which shall not be in the interests of elites and ruling parties.”

The video of Shahdad Baloch, an M-Phil student-turned separatist breathed his last along with another of his friend in a military operation in Kalat Balochistan, went viral on social media. Back then during his study period at Quaid I Azam university in an interview session with a private media channel, he is seen asking Ahsan Iqbal, then Planning and Development minister as it is a harsh truth Balochistan has Rekodiq, Saindak, Sui gas and so called game changer China Pakistan Economic Corridor (CPEC), but as Shahdad asked that Saindak, Rekodiq, Sui gas could never change the fate of Balochistan and Baloch, how could CPEC can change our fate?
If we recall the incident of Akbar Khan Bugti, we may see his legal demands of greater provincial autonomy for Baloch people, why then he, an old man forced to flee to mountains and wage war against a state, despite the fact that he ruled as Balochistan’s governor and worked on foreign policy of Pakistan once. The same question raised by Akbar Bugti about Sui-Gas and resources of Balochistan also raised by many others who went missing and killed, and after thirteen years the same question was asked by Shahdad Baloch.

As in 21st century, the people of Balochistan are living their lives in danger, like they are living in Stone-Age era. With each passing day, the number of enforced disappearances is increasing just because they demand equality, quality education, riddance from corrupt and looting authorities. In this society, we have witnessed from history that equality, liberty and freedom of life, speech, and expression have never been allotted to Baloch.

The recent incident of Baloch students who were peacefully protesting for the non-availability of internet connectivity to attend online classes due to the pandemic, were forcefully stopped, harassed, and imprisoned by the Balochistan Police in Quetta. Harassment of peaceful female students was really shocking. Instead of treating them humanely and taking notice of their issues and resolving them, the police chose rather a much inhumane way in dealing with the students’ affairs and incidents like this are becoming normal.

The political method of dealing with such situations has been deserted and to the authorities, the only option of using force has remained prevalent even to its own innocent citizens.

It seems like Balochistan has become a colony and directly ruled and governed by the federal. No one is interested in solving the issues of Baloch people, it seems, and that’s why the drug traffickers, abductors and other bourgeois are free to do what they want without any check and balance from the state. The Baloch people are aware that Pakistan’s policies have totally failed in bringing peace in Balochistan. The elite ruling class did not learn any lesson from secession of East-Pakistan. No one ever realized that abductions, and killings of those who raise voices would not solve problems rather will always keep frictions among the peace and prosperity of society. The volatile situation demands a political solution not a military one.