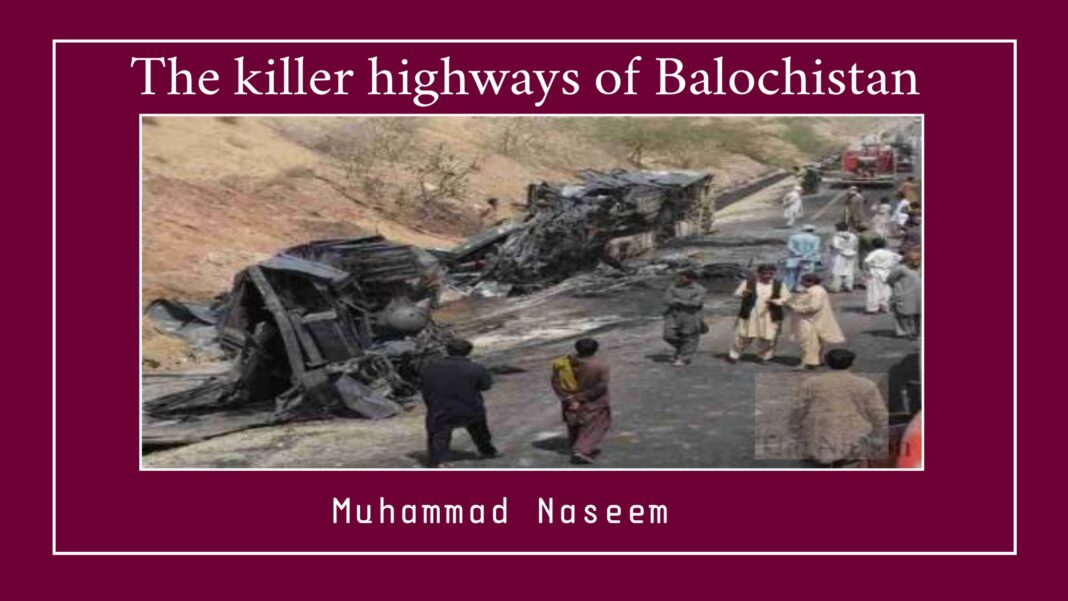 Highways are constructed for reliability of people worldwide. After every short distance, relief and medical centres are built for emergency cases. But in case of Balochistan, situation is alarming and opposite. The narrow roads of Balochistan, instead of development and connectivity, are causing deaths and destruction.

Balochistan, having big land mass with narrow lines, makes the transportation of the patients vulnerable to death from the sites of the accidents_ specially Quetta to Karachi highway. Because you cannot find a single Basic Health Unit (BHU) in the given Highway. As a result, the patients ought to be carried out to Quetta or Karachi in case of accidents. The long journeys after catastrophic accidents also mostly results in deaths of the people.

A report of National Highway/Motorway Police cleared the scenario by claiming that in Balochistan six thousand people are pershing annually and more than ten thousands are wounded in road accidents. Due to absence of good road network in the province, the death toll is increasing every year. As in previous year it reached to 8,000 deaths. Surprisingly, killing of masses in road accidents has surplus than the killing of people in other means of killing across the province.

Ironically, the death toll keeps increasing and road accidents have become a serious hazard in highways of Balochistan. Recently, with every passing day, atleast five to six people lose their precious lives only travelling in Makran coastal highway. Every passenger traveling to or in Balochistan is always in dilemma.

Why is Balochistan, the largest province by territory and smallest in terms of population, confronting such fatalities? Despite the province contributes more than enough to the national economy, why is the province the least developed in the state?

Perhaps one of the reasons could be, Balochistan is the only province which lacks motorways having single-line narrow highways. Looking into other causes of the road accidents, it stands that the transportation of illegal oil from Iran, which continuously dripes from vehicles, makes surfaces of roads more slippery.

However, one of the major causes can be traffic engineering design faults. The Senate committee on planning, development and special initiatives that met with Agha Shahzaib Durrani, asked the Minister of planning and government of Balochistan to improve the road network in the province so accidents may be reduced and precious human lives can be saved.

Concerned authorities must take concrete actions and plan an effective strategy towards the narrow highways of Balochistan. For the safety of road movers, the education of traffic rules, regulations, signs, symbols must be highlighted properly with the limitation of speed at different roads or curves should be created through constant awareness campaigns.

The fitness of vehicles plying on roads must be checked on daily basis by motorway authorities. In the same way, while designing the roads, traffic engineering skills should be implemented to allow enough space for the traffic to smoothly run on road.