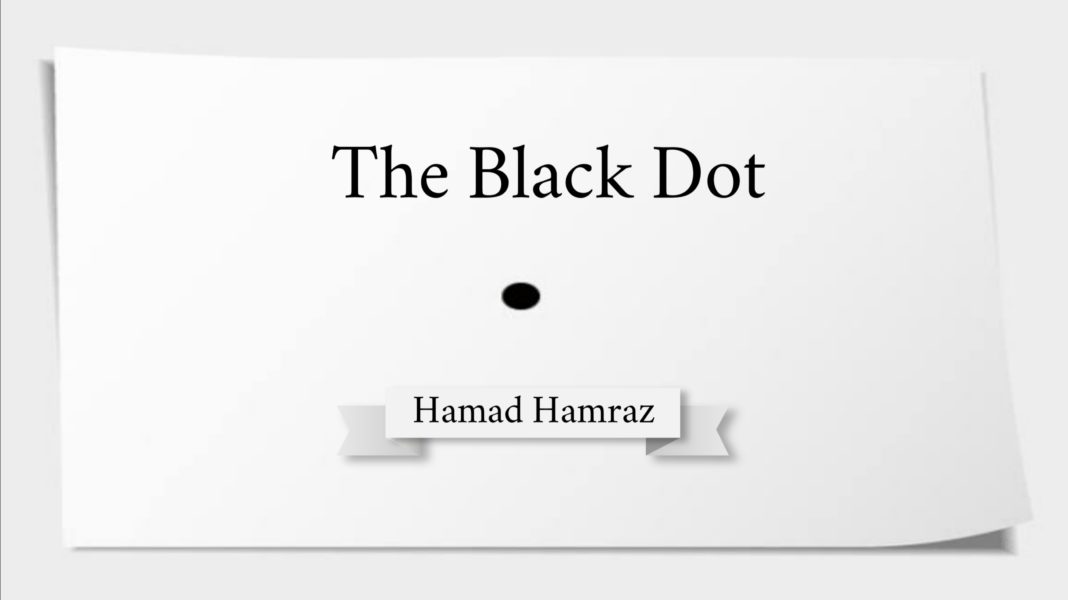 He was sitting still for hours and staring at the black dot on the white wall of the room with frozen eyes. It seemed like his connections with nothingness just started to be built and he was hanging in the space between existence and nothingness. Throughout unaware of time and external world, he was lost in that tiny dark spot. He was more like a corpse at the moment.

Actually, that tiny black dot changed his perception about himself and raised multifold doubts on his being an altruist (which he believed about himself). He doubted that despite being a righteous person, somewhere inside him evil existso, like that tiny black dot subsists on the mighty white wall. He became afraid and superstitious of the evil, which he thought would get growing in him and would probably cause annihilation to his faith.

He was shocked about that little black dot which, all of a sudden, came from nowhere and was now struggling for its survival on that whitey universe of the white wall. He imagined about the evil, which just came up in his mind, and ended up traumatizing him.

Morality has always been his weakest point and he was quite a religious person; but there has invariably been a problem with him: he was a dubious person, though he called and exposed himself a true believer and a faithful man yet more or less he kept questioning his faith.

However, he served much of his time worshiping and helping others. He always tried to be as good as one could be. As it is said that every coin has two sides and each side differs the other, the same was with him. From one side being a believer and an altruist; on the other side being obsessed with himself and self always came first for him than anything else.

A thought peeped out of his mind and directly descended on his faith being bogus ever since the beginning. He felt offended by his own ideas. He wanted to overcome these negative thoughts but every window of his mind was wide-open to welcome any idea in. The more he tried not to think the more negative thoughts surrounding him. He shouted out loud and kept repeating the same words again and again, “I am a true believer. I am an altruist. I am a righteous person I can never turn into evil. I have no evil inside me. I am a true believer. I am an altruist…………” He knew these were merely euphemisms that he was using to justify himself being a believer but in reality he was conquered by skeptical thoughts.

He should have kept getting away but he chose to overreact and give much importance to those negative thoughts which were perhaps going to result as a noxious conclusion for him. His eyes were glued on the black dot until now. He stood up in a jiffy and went towards the black dot. He tried to clean it up and wanted to dissolve its redoubtable existence forever from that wall. But how could he vanish the evil inside him, which by the time has wrapped his entire existence and poured his mind with dark evilest thoughts.

The superstition completely changed his life. He became a psychotic in some hours owing to a tiny black dot, which in fact was nothing but a dark spot. The believer no longer believed in himself. His white life was now in shadow of a tiny black dot and his mind was chained in delusion that he is not what he always assumed. Being overwhelmed with guilt and negativity he found no other way, and he contemplated suicide. Thus, his shallowed and hinky existence was crawling towards nothingness and that was the dead-end of the believer.