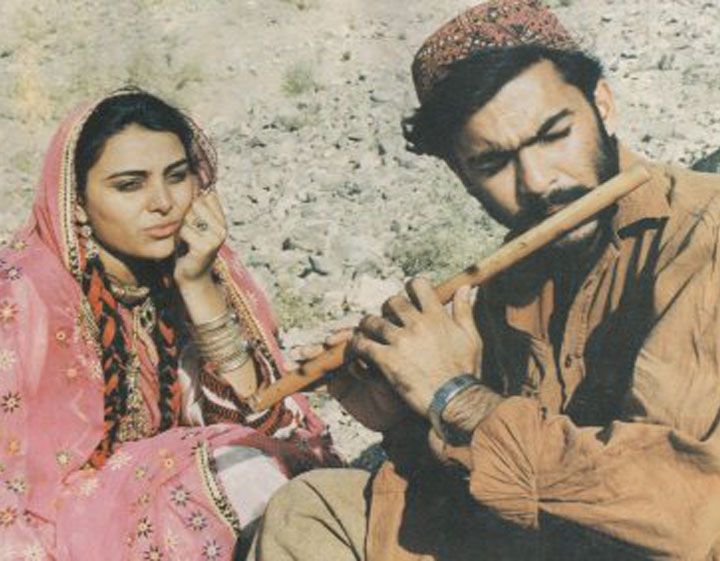 Shay Murid and Hani are two famous and living names which reflect their glories in the pages of Baloch history, and their tragic love story is heard almost in every house of Balochistan. Shay Murid was the son of Shay Mubarak and Hani was the daughter of Mir Deenar. Hani was Murid’s cousin and was betrothed to Murid in childhood. She was known for her good character and faithfulness.
Anyhow, Legend has it that one day when Mir Chakar Rind with his companions was returning from a day of hunting, they felt thirsty. They stopped at the town where Murid’s fiancée (Hani) lived. Chakar went to Mir Deenar’s home and asked for water, there was nobody except Hani.  Hani brought him clean water in a silver bowl in which she put dwarf palm leaf, properly washed. Mir Chakar was surprised by the pieces of straw; however, he drank the water with care so as to avoid swallowing the straw. Seeing this, Mir Chakar got engrossed in thinking about Hani’s act of putting pieces of straw in the water.

Later, he realized that Hani had acted wisely by putting pieces of straw into the water. Since he drank water on empty stomach and could be choked by drinking it in a single gulp. Mir Chakar was so impressed by the act of Hani; hence he wanted to marry her. He sent Sazen, who was the courier of Chakar, with the company of another old woman for selling things but their intention was to pop the question for Hani to her father. However, there Sazen came to know that Hani was already betrothed to her cousin Shay Murid; Sazen did her utmost to woo her to leave Murid and marry Chakar; but her all efforts went in vain, as Hani refused and took them out of her home. It is said that in the meantime, Sazen promised that one day she would surely be the bride of Chakar.

Chakar and Sazen thought of a lot of tricks so that they must be able to break the engagement of Hani and Shay Murid. Sometimes later, Mir Chakar organized a gathering of nobles as well as poets who shared poetry. At the height of it, Mir Chakar asked the nobles to make vows on which they must sacrifice their lives if required. Every chief at the gathering made a promise. Mir Jado promised that he would chop off the head of anyone who touched his beard at the assembly of nobles. He was followed by Mir Haibitan, who vowed that if anybody’s camel joined his camel-herd, he would never give it back. Mir Chakar promised that he would sit under the shadow of a tree, whosoever chopped it down; he would never make a move from the shadow of it until it is chopped down. He was true to his words. At last came the turn of Shay Murid who promised that if anyone asked for anything in his possession on Thursday morning, he would give.

Right after a short period, Mir Chakar tested Mir Jado’s word by asking his young son to touch his father’s beard during an assembly of nobles. The young boy innocently did what he was told. Mir Jado turned his face and moved the boy believing that no one noticed; however, Mir Chakar told the boy to repeat the action. The boy grabbed his father’s beard once again. The entire assembly became silent and looked towards Mir Jado whether he would be true to his word. Jado, full of anger, unsheathes his sword and smote the head of his innocent son in the presence of all the nobles. Mir Chakar also found others true to their words. Now it was time to test Shay Murid, which Chakar had been waiting for.

Chakar sent some minstrels to Shay Murid after offering prayers on Thursday morning as Chakar conspired to get Hani. He instructed the minstrels to ask for Hani from Murid as their reward after making him pleased with the songs of praise. And they did what they were instructed.

Shay Murid became completely shocked. He thought, Chakar would ask for his bow which was unique but Chakar didn’t. With a heavy heart and sadness, Shay Murid, true to his words, surrendered Hani to Chakar. The unexpected demand distressed him deeply, and Murid realized that he had lost Hani. He thought if he had not kept his promise, he would have been mocked at the exact time as well as in the future. After the annulment of Murid’s engagement with Hani, Hani was soon married to Mir Chakar.

But Murid was so shaken by this turn of actions that he abandoned his former lifestyle and passed the days and nights in worship of Allah. Shay Murid couldn’t bear to live in Sivi (Sibi now), the native town of theirs; he decided to leave his native place and followed a group of mendicant going to perform their pilgrimage (hajj) at the holy cities of Makka and Madina; and, remained there for a long span of time, during this period of his life; he truly became a mendicant.

After spending years away, he returned to Sibi in shabby clothes with his long hair hanging down to his shoulder. In the company of beggars, he passed himself off as an unknown mendicant begging for alms at the palace of Mir Chakar Rind. The maidservant gave bowls filled with grain to each mendicant, but when she presented this food to Murid, she noticed that his eyes were fixed upon Hani. Hani recognized him at once but held herself back as to not raise suspicions.

To recognize Shay Murid, the Rind nobles gathered for an archery competition. During the contest, the nobles noticed the interest of Murid, who was the leader of beggars. At first, the Rind nobles laughed at him because of his shabby clothes, asking that how a mendicant dressed in torn clothes could bend a bow and hit a target; however, they gave him a bow and arrow. He bent the bow but it could not bear the power of his arms and broke into pieces. They gave him another one which he also broke. After breaking the third bow the Rind nobles started realizing that he might be Shay Murid. They sent someone to fetch Murid’s bow, which was made out of steel and was called ‘jug’ (yoke) because of its form and weight.

When it was given to Shay Murid, he touched and kissed it gently. After examining it perfectly as a master archer, he bent the bow with great skills, and shot three arrows from it which hit the exact target. The Rind’s suspicion that the beggar was actually Shay Murid was confirmed after the experiment with the bow. The Rind nobles stopped Murid and sent a servant to ask Hani for Murid’s distinguishing signs or marks which she would know, for the reason that they had played together as children. Hani told of a mark which was behind his eyebrow. When the Rinds checked the sign, they, eventually, recognized Shay Murid.

Although Mir Chakar married Hani, he was unable to consummate the marriage.  Later he realized that Hani could never truly be his. When he found out that Shay Murid had returned, he told Hani that Shay Murid was a great man and deserved her. Therefore, he divorced her and told her to go to Shay Murid. Hani decided to go to Murid, who was the first and only love of her. She told him Mir Chakar had realized his mistake and had freed her; therefore, they (Shay Murid& Hani) could be together. Although it is still not clear whether they married or not, many believe they married and the same night they disappeared. But to others, they didn’t marry as they believe Hani asked for marriage. But Shay Murid told her that he had now reached a different level and cannot step down from that level to take her.

Surely, Hani was the source by which he had reached closer to Allah. Murid was ready to leave her. On the following day Murid visited his father’s camel herd, chose a white she-camel, mounted her, and disappeared from humans’ eyes. Shay Murid has become the immortal saint of Baloch, and Baloch believe that until the living world Shay Murid remains everlasting. 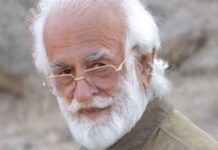 Akbar Khan Bugti: A Man Who Lived And Died As He Wished