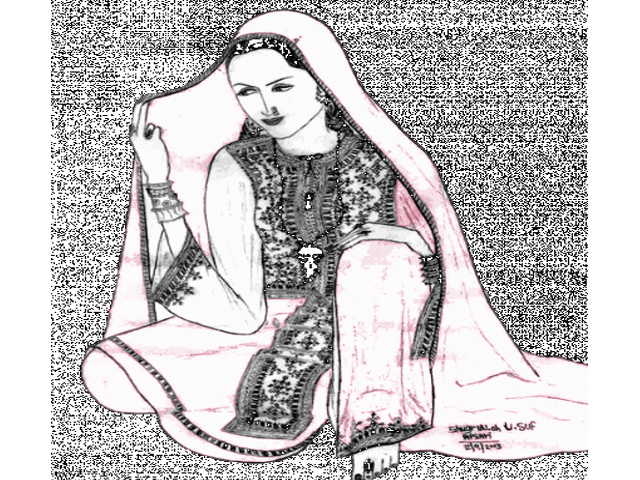 No perfection lies in world, nothing is without mistake, one thing with multiple ideas and suspense, opposing and jealousy wear veil of destructive criticism, rejecting what doesn’t meet one’s personal expectations and go on and on have taken shape of traditions in the extant world. Some mountains have become the symbol of stability, some rivers are changed into symbol of identity and life, some people have achieved honor and have been turned into symbol of bravery, honesty, faith, revolution, literature, writing, peace and so on. Likewise, every nation had some mind-boggling personalities, of whose lifetime achievement, they take pride in. Similarly, in Baloch nation:

In the same way, there lived many such kind of unforgettable personalities in Baloch nation who with their praiseworthy devotion have made exemplary history. The one who I have made the centre of my writing is thought the symbol of purity, Mahnaz.

Inspiring and encouraging is her character which takes a hard and self-running war against her own hubby, who suspected her having affairs with Homer, who works as a servant at their home, to prove herself as pure as she was from birth.

Shahdad, son of Mir Chakar, marries two women, first Shari and then Mahnaz. Naturally, in such kind of cases jealousy and envy grow stronger between the wives. Shahdad loves his second wife more than the first, perhaps both, but for the first one their relation remains very hurtful.

Consequently, Shari thinks of plotting a conspiracy to generate contradictions in their relation and get them divorced. For this to happen, she, like the game of chess, starts playing very sharply with each character involved in his family. By some self-created means, she succeeds to prove that Mahnaz and Homer have unfair relation. She makes this point the gist of argument and cause of clashes between two loving relations and infuriate Shahdad to take stern steps to the matter. Later, Shahdad, unaware of the fact, accuses Mahnaz of having external affair with Homer. This results the clash of their relation and creates more trouble for both of them.

It is undoubtedly so much difficult to raise voice for what you think your winning is itself your losing and Mahnaz was caught in similar type of situation, one side, the man who she loves a lot, second side, the question of her dignity and purity, and the third, the respect and name of her family. She had of course fairly ambivalent feelings dealing with this matter and no other than her can explain the feelings.

Doubtlessly, women’s nature is mainly considered to be very sensitive, which is likely to lose its position and control at any vulnerable situation, but here the case is thoroughly opposite of what I have said. Mahnaz, rather than bowing to the situation, takes as unbreakable stand to fight against her wishes and feelings to prove her innocence and she proved it.

Why is her personality so highly-respected and talked of in Baloch nation?
The simplest answer to me is that she at the same time following the all traditional values and social conducts of Balochi culture, religious custom, though unknowingly and the third struggling hard to rubbish the groundless allegations made against her. Mostly people commit suicide having such kind of blemish on their dignity especially Baloch whereas she fights with her feelings and emotions, prepares herself physically and mentally to brave the trouble.

Everybody has got the ideas of his or her own regarding any personality, so have I. Neither I long to oppose others’ ideas nor do I want to inculcate my feelings about Mahnaz into one’s mind forcefully. Read it, search about her, then create own thoughts and ideas after what you do.

Lastly, were words very supportive, I could have done better than this since there is always room for betterment.