Home Latest News The Untold Story Of A Mother 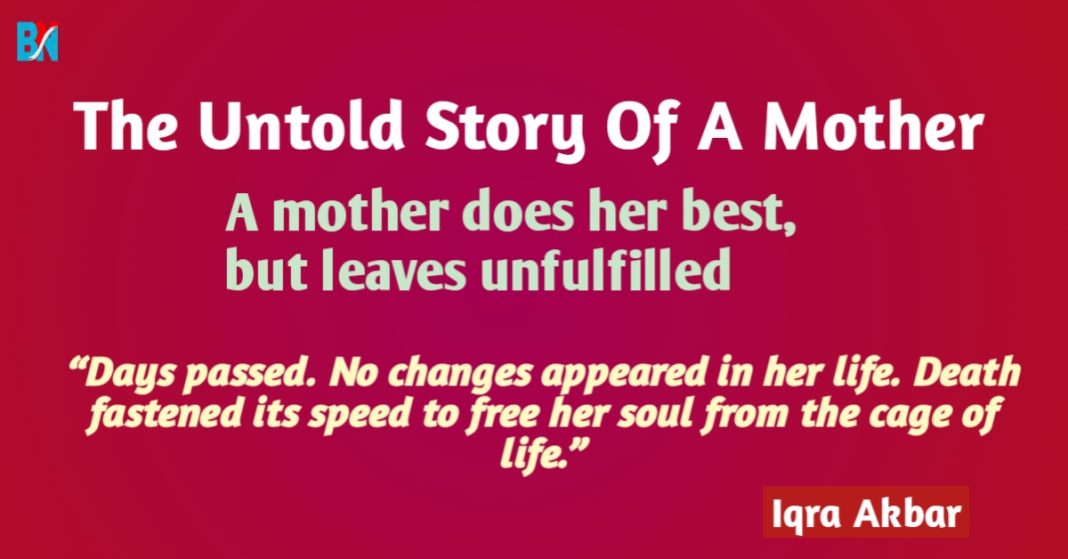 Share on Facebook
Tweet on Twitter
The days flew with a wink of an eye but leaving all buried stories for us. I never had the guts to write a story full of melancholy fable. Nevertheless, keeping the story within me might be unfair to her soul. A woman named Shahruk, a neighbour in a small house in Koshk, Turbat. She made me a promise saying when she dies, I should post her picture sharing her story with everyone. I don’t have her picture either except for her story.
It’s very customary in Baloch marriage ceremonies that we retain a “Sargowap” (a lady who sings songs for the bride and groom and does all the work). She was a sargowap from her early days to her declining age. She sang songs with her full energy and melodious voice where everyone including children, girls and women had fun and enjoyed her songs. She fed her family. She fulfilled the necessities of her children with insufficient amount working in others’ houses as a maid.
In such penury, she faced every hurdle of life just for the sake of compulsions. She had to endure everything – feeding her three daughters and one son and even at the time. She never quit working because she saw no other way to the source.
However, her children grew up and got married to poor families and the only son, the hope, the apple of her eyes, started injecting drugs like narcotics, khat and heroin. Beholding her son in such a condition, she could neither blame her son nor accept the harsh reality that her son was the victim of but grief, stress and fret changed her trust into hopelessness.
Poverty, unemployment, massive inflation, responsibilities, burdens, and tensions caused her paralysis. The illness brought more tense situations for her and her family. People helped her in her hard days but how long could people help? All will get tired of helping someday. But thanks to God, she felt better, and was able to move on. Then she started begging and feeding her son and buying drugs for his son. The son used to shout and cut his hands with the blade if couldn’t get drugs in time.
Likewise, days passed with life’s sadness. Nothing changed things. Same poverty. Death fastened its speed to free her soul from the cage which was prisoned for a long. She died in her broken house.
Nevertheless, nothing even changed after death. Her son’s complete life is ruined, and he’s just near life and death. He acts like insane, screaming, crying, yearning and no one hears his voice echoing at each corner. He isn’t in a stage of begging. He does what is so easily acquired like robbery and stealing.
I brought up a story of a single helpless mother who was dependent, powerless, and incapable in a world where elites’ illegal work. No matter destroys thousands of houses but it’s yet considered a great business. Politics is a game for those who win and rule and possess privileges. It’s not a story of a single mother or those who’re victims can better understand and feel the pain.
Facebook Comments