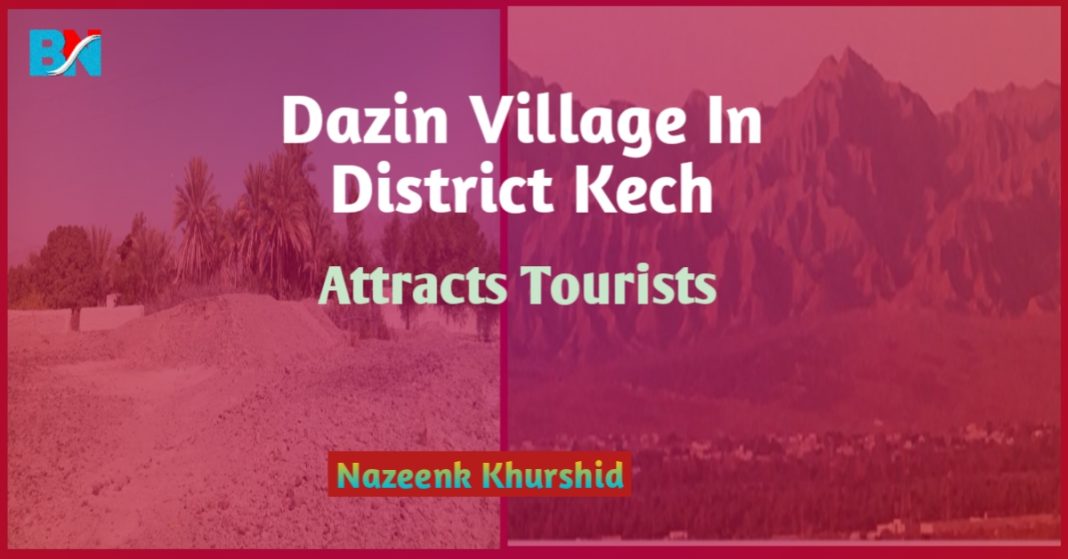 Dazin is a village in Tehsil Tump of district Kech. It is some 100 kilometers away from Turbat city in the west. It takes two hours to reach in the town due to the bumpy roads.

On our way to Dazin, we passed through Neheng River – the first river flowing from east to west in the country. It is flowing from Iran which is a great source of water for the inhabitants of the area. The place I stayed was near to the river. Apart from it, Neheng is a Persian word evoking gentleness and reservations.

Furthermore, the historical Kalat known as ‘Tump-e-Kalat’ can be viewed on the main road of Dazin. The fort was ruled by Sardar Mir Murad Gichki in the past. The fort falls in Tump which is on the route to Dazin.

Moreover, when we were on our way to Dazin, I got to see the karez (tunnel), surrounded with date trees, on our way which was in Malikabad, a region. We stayed there for some times, visited our relatives and then began our journey to Dazin.

Nevertheless, in terms of institutions, there is only one school from class nursery to 8th. As compare to the city, Dazin lags institutions, hospitals, markets and other basics of life. The village is a beautiful place only if it had facilities for better and easier life. Despite the fact that there is no network tower in the nearby homes, it is very peaceful in itself with nature. The population is very less and it reflects Balochistan.

In the general terms, although there is a lack of proper facilities, which I thought was a misery, but having no facilities there means the happiness and unity of the people in Dazin. They believe facilities will snatch everything they had theirs from them.

The best thing about Dazin is its hospitality. People in the village are very pure-hearted and very hospitable. Once if one meets with them, they will get attached to them. Therefore, I urge people to visit Dazin and enjoy the natural beauty with beautiful people.