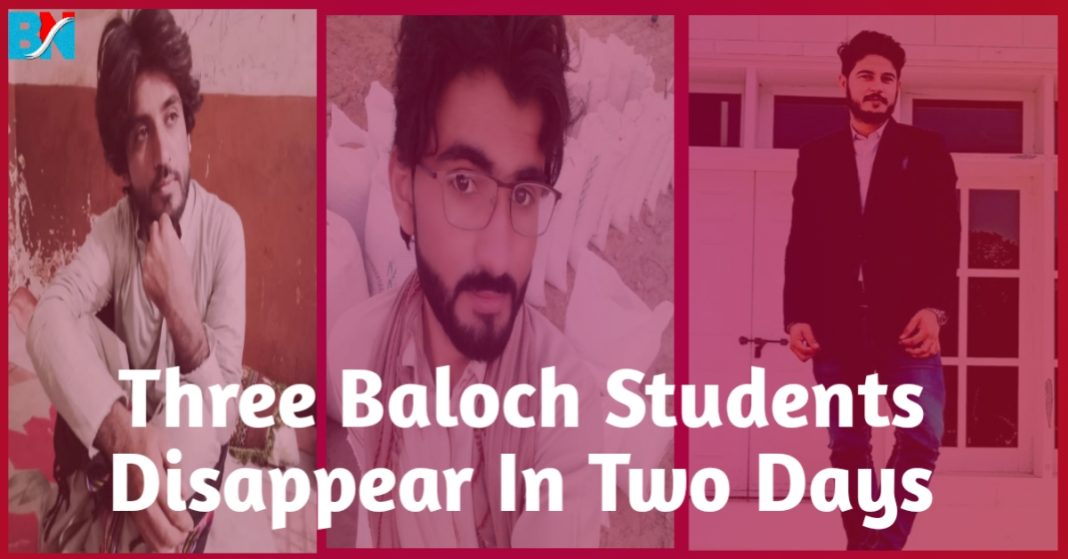 In the last two days, three Baloch students were disappeared from Kech and Khuzdar districts of Balochistan respectively.

Nadil Hussain son of Mubarak (resident of Balgatar) was allegedly disappeared from main Turbat bazaar at 11 in the night of December 30, family confirms. They said that Nadil was innocent and working in Buledi Trading Company as a part-time labor to get his hand to mouth and support his family. They add that he was not involved in any illegal activity and was focused on his studies and work.

The family told The Baloch News that Nadil had quitted his education earlier for a year to work as a full-time labor when they were hit by financial crisis. After he managed to overcome the crisis at an extent, he continued his education. “Presently, Nadil has taken admission in Allama Iqbal Open University for an associate degree,” said his family.

In a separate incident in Gresha area of district Khuzdar today (December 31), two more students, identified as Siraj Noor and Mohammad Arif, were ‘disappeared’. Siraj is a student of seventh semester in the department of Law (LLB) at University of Sargodha (Punjab), while Arif is a graduate from University of Balochistan and was preparing for Central Superior Services (CSS). His paid receipt for MCQS Based Preliminary Test (MPT) in the special CSS.

Student bodies including Baloch Students Council, Sargodha, and Baloch Students Council, Lahore showed concerns for the safe recovery of the ‘missing students’. In their separate statements, they said that the recent wave of enforced disappearances of Baloch students was seriously evolving day after day. They said that from disappearances outside Balochistan to the province itself, Baloch students were not safe anywhere.

They urged the students to raise their voice against these injustices before ‘it victimised every Baloch student’, while families appealed to the human rights organisations to ensure the safe recovery of their loved ones.