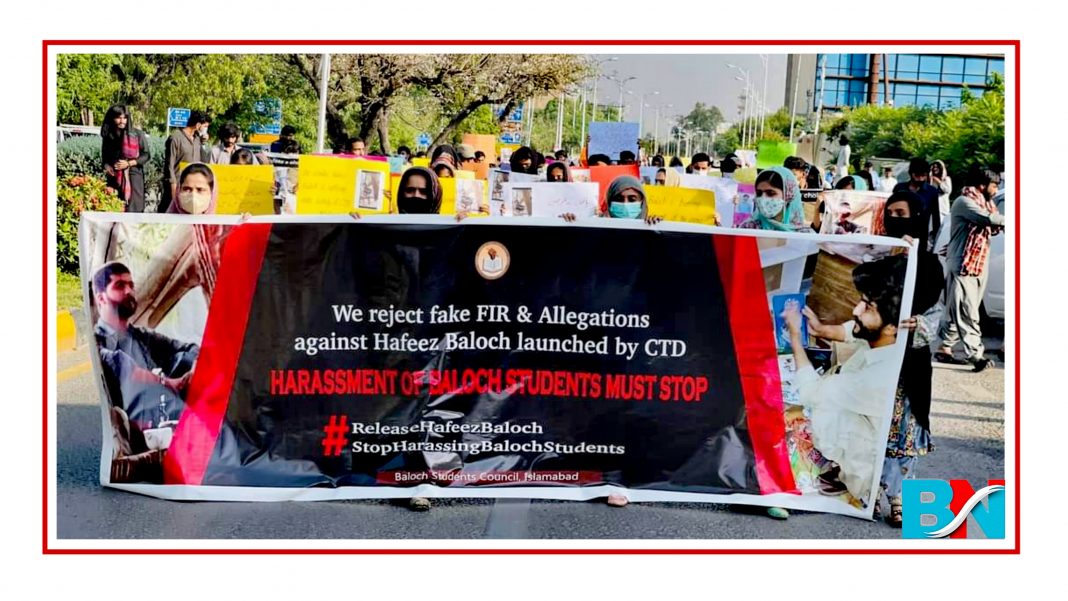 Harassing Baloch students in Islamabad has become a trend in recent times with cases appearing more frequently than ever. Baloch Students Council, Islamabad (BSC) had a sit-in camp for nearly a month in which the Baloch students, enrolled in federal universities, have raised their voices against the profiling and harassment of Baloch students within Islamabad and Punjab, along with the abduction of one of their fellow students, Hafeez Baloch, who is an M.Phil scholar at the prestigious Quaid-e-Azam University, Islamabad (QAU).

According to BSC, Hafeez was harassed several times before being taken away from his hometown in Khuzdar by three unknown persons in front of his students in an academy nearby his residency where he tended to teach when he was to spend his semester vacations. It may not come as a surprise for many as the restive province gets to have such cases more often than soon.

His whereabouts have just come to be known on March 30th. According to his family members, he is in the custody of city police of Dera Murad Jamali, and is yet behind the bars; however, the thing to be grateful for is that his family has come to know at least where he is unlike hundreds and thousands such families who know not. BSC Islamabad conducted yet another press conference on the Friday (i.e 8th April) saying his First Information Report (FIR) was a fake one, and all allegations made against him are merely wrong. They also organised a protest outside the press club a day later on April 9.

The second demand by students in Islamabad is of systematic harassment of Baloch students in the capital territory. Indeed, harassment has reached its peak in just sometime when you get to hear from everyone or other students being victim of harassment in one way or the other. It shows how Baloch students are unsafe in the safest place of the country.

It starts from the very beginning when Baloch students across the country, especially from Balochistan province, come for admissions in universities of Islamabad. They say to have been asked questions that have nothing to do with the department they have come to take admissions in.

Moreover, when the students secure their admissions in universities, they get harassed within campuses so is the same outside. In the campuses, the teachers pass bad comments on the dressings of Baloch. Maqbool, a student in National University of Modern Languages, Islamabad (NUML), says that his teacher shouted at him when he entered the staff room of teachers with his traditional Balochi clothes. The teacher had told him not to come in the staff room when he had Balochi clothes on.

Alike him, I myself have faced some comments from instructors having worn Balochi clothes. Even they do not attest documents for scholarships for days when they find you in Balochi clothes. Sometimes, teachers, though for fun, hurt Baloch by saying words such as: “This nation will never rise.”

Students talk of being in threat, plus mentally pressurised by such acts with them that happen with no other people belonging to any other nation of the country. It is, forsooth, the evidence of Baloch students never being seen with the same eye as other nationals are. The harassment cases are deteriorating as the days pass on.

The federal government, including other concerned authorities, have to take immediate steps on the plea of Baloch students who have no mental peace due to the rising and continuous harassment of them. It is the government’s duty to ensure safety and peace of its people. It is on government to bring the harassment to an end and take action against the people involved. The students are awaiting an end to it.