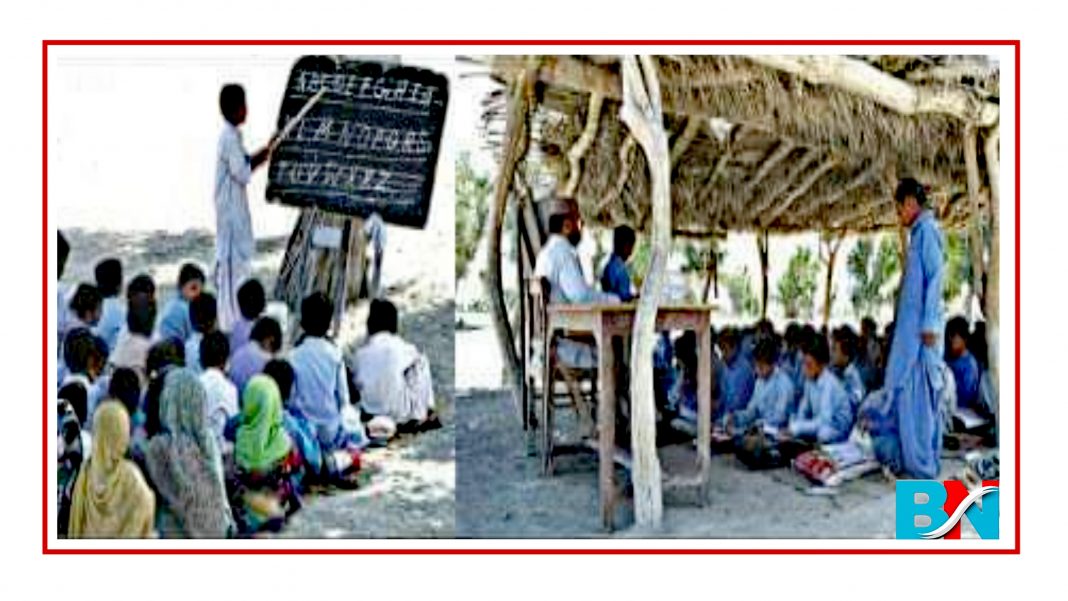 Ball Nigwar is a region with a population of around more than 80,000 people, which is located in the western side of Kech. This remote town is virtually untouched and has been neglected by all successive governments so far. It has never received any constitutional development except fake promises and statements in papers. Disappointingly, Ball Nigwar is enormously confronting several problems, ranking the region as one of the most backward areas in the province. For instance, the missing image of high quality education, shortage of public library, good roads, absence of hospitals, electricity crisis and so many other basic amenities.

Education system in the area is in worse condition these days. In simple words, it is dilapidated thoroughly. The region has only one high school for boys which has not enough staff to provide a good education to the students of the area. The number of students of high school is estimated to be more than 500. Due to lack of teachers, courses are not being completed on the demand of the syllabus.

Being a student of the region, what I had confronted is mandatory to be mentioned. We were around 60 students till I graduated, but only 20 to 30 succeeded to end up in colleges. And also, some of them are not taking classes, and working as labours in workshops or doing some other works so as to earn a livelihood for their families. Similarly, students’ determinations and hopes are being lost to own the dreams of landing on the moon as being the next generation.

What’s more, the school has no any library and laboratory. We students twice went to Turbat city to the Member of Provincial Assembly (MPA) Mr. Lala Rasheed on the demand of school’s fundamental requirements but, unfortunately, we were disappointed and made fake promises of progress and school’s betterment. Not only Mr. Lala Rasheed, but also we knocked every door of assistance of every administrator for our school’s needs. Yet they did not provide any single solution to the problems we students are indulged on daily basis.

School has no any buses for far-flung students. They coercively walk to school where the students belonging to far-flung areas pay walks of 10 to 15 kilometers. The following villages are extremely considered far-flung such as Dizdar, Kapkapar, Gawarag, Kashap, Talvi, Shayzangi, Machat, Drachkoh and many other adjourning areas. Due to the huge distance, many students are dropping out and many are being absent after each day.

Since the region is underdeveloped, poverty is developed in every second home. Nonetheless, after matriculation, students are ending their interest in study. Unfortunately, they cannot go ahead for higher education due to this extreme poverty. The school is upgraded to a secondary but in papers and not practically. We can get admission there only but for classes we ought to look forward for main cities of province because the infrastructure of a college is yet to be established. We are running on our own. Education is the fundamental right of every individual. Depriving students of their rights is reprehensible. Lots of promises were made on the promotion of school but bringing promises into practical move is never encouraged.

What makes the situation more fragile is lack of a high school for girls. Females’ education has always been a tough question in Balochistan and now leaving a region into the peril of illiteracy – particularly for girl – will surely post a negative gesture to females’ education. There is only one middle school for girls. After completing their middle section, in most cases, females end up their educational career.

Very rarely, a few of them go for higher education. Truth be told, if any girl wants to study 9th and 10th classes, she needs to travel some 8-10 KM in the evening, paying 500 per subject, too. My brother takes my little sister from our village to town for attending her classes on daily basis. She is the only from our village who is studying in class 9th. Rest of her colleagues study in the morning. It is very important to mention that these evening classes are managed by these female students who have deliberately forced the teachers of Government Boys Higher and Secondary School Ball Nigwar to teach them. Where to escape daily existing problems? Though they have managed two teachers but they are yet to be satisfied with this teaching because they can barely cover two subjects while rest go untouched.

Girls are equal entitled in pursuing education as boys. Ball Nigwar is in dire need of a high school for girls. Government of Balochistan must make it certain that female students are no more to be vulnerable to be preferred being selected for early marriages rather than pursuing a BS or Master degree.

How can you get yourself to a hospital in case of emergency while the road is thoroughly dilapidated and the destination is around 90km away? The only road which connects Ball Nigwar to Turbat (the second largest city of Balochistan) has thoroughly been deteriorated several years ago. This immense cause came into being due to 2007’s awful flood. Since then, it is not reconstructed. Unfortunate regionals travel to Turbat on daily basis for sake of treatment and other essential requisites. While traveling they face many problems. In case of emergency, several people have died before reaching to main cities for treatment including my grandfather who lost his life in March 2019, caused a hemorrhagic stroke.

However, promises were made from politicians but, later on, forgotten to bring them into being. After a very long time, the construction of the road had begun, but could not meet a good end as it was postponed, calling it a security issue as usual.

People living in urban areas cannot endure a second being into darkness and, on the other hand, thanks to my people who are going through electricity crisis for a long time. Since 2019, the region is disconnected to electricity. Before that, it was scheduled but poorly and now it is totally cut off. Electricity was not only for eliminating the darkness but also it played a very important role in extracting water from the wells.

However, in the last two to three years, an investigative report presented in the Federal National Assembly which revealed that only 36% of Balochistan is electrified. While remaining 64% areas of province were plunged into darkness. Moreover, Makran region is disconnected with the national grid station. They are dependent on Iran. Power shortfalls in Iran itself has a frequent load-shedding in these areas while a complete outage in several rural areas such as Dasht.

Despite introducing so many projects, government is not succeeded in supplying electricity in rural areas of Balochistan. Government should install energy projects through mega projects such as CPEC so as to electrify total Balochistan, particularly Makran division.

Do you think of a self-learnt person in a common hospital can treat all kind of diseases? Dependent on a great deal of people, the region does not have a single verified doctor nor a satisfactory civil hospital. This is disruptive. Due to this, several people have lost their lives. Murad Jan, who was a diabetic patient after rushing to Turbat and then to Karachi, is one of the several victims. He died in a hospital at Turbat when he found no expert to treat. However, Ballo Shamsok, who was on the bed around two and half years at village due to having no good treatment around. Being financially poor, her family could not head towards big cities as Kech and Karachi. In the same way, she passed away.

Deficiency of hospitals has taken many lives in the region because of inadequate care and unsure maintenance of government. Due to this, scores of fake doctors have appeared in the region who are extremely more dangerous than avoiding treatment.

In conclusion, Ball Nigwar is prone to the extreme of aforementioned issues. It has never caught encouraging attention of every administrator over addressing the grievances of regionals. All the solutions it received to its problems were just in papers. While the practical implementation is yet to be proceeded. Hence, it is high time the government needed to come up with concrete measures and facilitate the region. The government’s deep concentration on the establishment of a college and rebuilding schools and functioning other sectors should be a top priority.