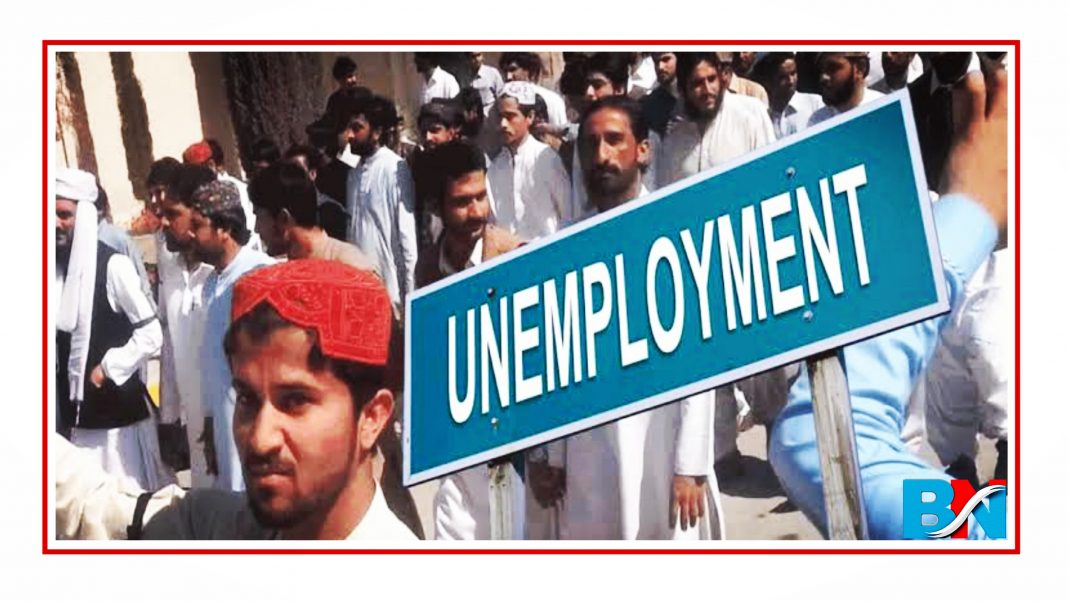 Unemployment is a global problem. But, Pakistan tops in failure to curb it after some effort of years. One must admit its adverse consequences, disrupting the political scenario of a country and tainting the societies badly. However, high rate of suicide cases, growing criminal activities, robbery, drug consumption and illicit acts against the law happen to shape into being are caused by job deprivation. Unfortunately, Balochistan is prone to the extreme of aforementioned problem. Despite being the largest and moneyed province of the country, Balochistan has never caught federal attention over filling the gap of job provision. Absence of due attention of provincial and federal government has led locals of the province to economic, social, political, psychological and several other chaos.

Balochistan is the first province to suffer the most from unemployment. According to Pakistan Labour Force research (2014-15), Punjab stands on first position with 2.32 million unemployed population, Sindh 0.66 million, Khayber Pakhtunkhwa with 0.51 million while Balochistan has ranked with 0.13 million. But, when we divide the unemployed percentage with total population of each province to get solution of the accurate percentage of unemployed population in all provinces throughout country, Balochistan stands at 4.13%, scoring the highest of all. Surprisingly, Balochistan’s share to the advancement of the overall country is bigger than investment made on itself.

High suicide cases reported in Balochistan is the prime factor of unemployment. Very recently, a young boy from Gwadar named Saif Ullah, fed up with unemployment and committed suicide. According to sources, he was jobless for a very long period. Eventually, he couldn’t afford life and went through down suicide. In June 2019, Nazar Mohammad, a student of BS Chemical Engineering was compelled to lose his life by putting fire on himself in Kech highway. Quite similar with Saif Ullah and Nazar Mohammad, Nabil, son of Allah Baksh, a young man from Gwadar committed suicide, too. Suicide incidents are multiple in Balochistan but very rarely are noted and most of the cases go without any investigation. Statistically, some researchers from Aga Khan University Karachi conducted a survey and found that about 800,000 cases of suicide occur per year across the world and around 75 of them are from middle income states which implicates Pakistan. And, in Pakistan, the greater number comes from unfortunate province; Balochistan.

According to another revealed report, an estimated number of 25000 people complete their graduation from Balochistan annually but unfortunately, only around 2000 get job. What happens to remaining 23000 people? How do they qualify with the requirement of their respective degrees?

Low budget release is one of the several factors of unemployment in Balochistan.

An amount of Rs. 71 billions has been allocated in the budget for education which is Rs. 9 billions more than previous. However, the largest part of the budget of the education department is the salaries of the employees. Surprisingly, despite knowing unemployment is a great problem faced by province, the budget includes only 6840 vacancies. This budgetary structure doesn’t meet the needs of the province in order to live a similar, luxurious peace as of Punjab and federal territories. Balochistan needs a higher budget investment.

The Aghaz-e-Haqooq-e-Balochistan package launched after a joint sitting of the parliament on November 24, 2009, as an agreement to solve the issues of Balochistan and make it an equal partner in Federation. It aimed to address an understanding to longstanding tribulations of the province and said to lead a new time of socioeconomic development. However, on November 21, 2021, the senate implementation committee expressed the purpose of package; to provide job opportunities to Baloch youths and bring an addition to their reserved quota for employment. But the package has not attained its committed objectives since its adoption.

Moreover, China Pakistan Economic Corridor (CPEC) was an another initiative to boost Balochistan a business hub. Did this really prove to bring a change in the fate of Balochistan’s socioeconomic frame? The province has yet the same unemployment rate it used to have before its (CPEC) launch in 2015. Since province’s past mega projects such as Reko Diq and Saindak copper-gold project couldn’t transform people’s lives in Balochistan, how would this mega do? This has always been a tough task for every provincial and federal government to qualify a productive mechanism to boost Balochistan’s economic stability. Regimens with many slogans have passed, but change has yet been visible.

In conclusion, poverty, high illiteracy and other miseries are the bleak images in Balochistan which are all related to unemployment. This has been a persistent issue for last several decades and both federal and provincial governments have failed to address an understanding to the failure of past guidelines of government. All ruling parties — be it provincial and federal – made fake promises of job provisions but those promises have never turned into reality.