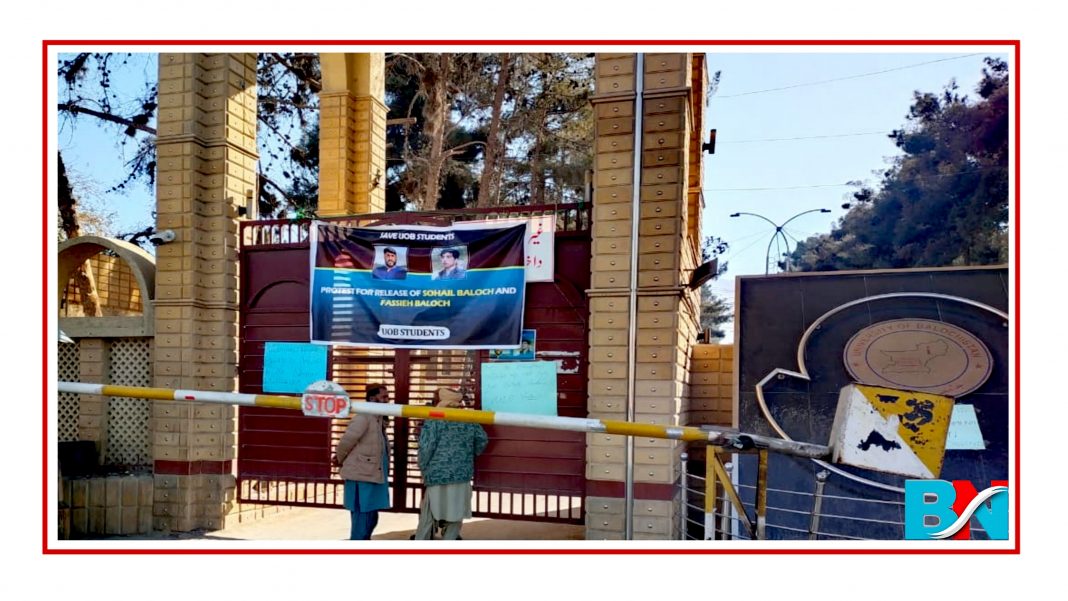 Today marks the fourteenth day of the protest by students of  Balochistan University against the enforced disappearance of two students, Sohail Baloch and Fassieh Baloch, from university’s hostel on November 1. Both the students have been studying in Pakistan Studies department of the varsity. Upon the spread of the news of their going missing, students blocked the varsity gates on November 8, not letting anyone to enter the campus. Mid-term examinations, scheduled in the given week, were also postponed as the protesters announced to boycott the classes and examinations till the recovery of their fellows.

After negotiations with the students on November 12, the committee requested the protesting students to give them four days to trace the two students upon which students shifted their protesting camp to administration block from varsity gate. They opened the gate and let the activities of the university to continue for four days as decided in their meeting with the government committee. However, boycotting the examinations continued.

On Tuesday (November 16), the given deadline was over upon which the government committee visited back the students. In the meeting with the students, the committee said they could not trace the two students. They tried to convince the students to finish their protest, but that did not bring up any desired conclusion. While leaving, the asked for three more days to get into the matter.

Students, despite giving back the due time to the government committee, announced in their press conference after unsuccessful negotiations to terminate all the academic and non-academic activities of the university and re-closed the main gates of university right after their press conference. Besides the call to close the university, students warned the government of a “surprise call” if their fellows were not recovered.

Given the timeline, students transfered their protest back to varsity gate and suspended all the academic and non-academic activities. Before making a bigger call, they waited for the committee to ensure them of their stance over the given issue.

On November 19, Balochistan Assembly called for their first winter session where the issue was raised by the former Chief Minister of Balochistan, Aslam Raisani which was backed by the government and opposition members. “Disappearance of students from Balochistan University is a very serious matter which could not be ignored,” Raisani said.

Looking at the haplessness of the government, students announced in their press conference on November 20 to close all the professional institutions, colleges and universities of Quetta by Monday. “The closure of institutions will continue till Tuesday and if still we see no seriousness from government, from Wednesday we will close all the colleges and universities of overall Balochistan,” added the students’ committee.

In their press conference, they requested people from all walks of life to support their call, be that cleric associations, teachers’ associations, staff associations and students of Balochistan to stand by their side till their fellow students are recovered. “If any interruption is found in our call, administrations of institutions and government will be responsible for that.”

Prior to the meeting of the students with the government committee on November 16, Registrar of University of Balochistan, Dr. Farhat Iqbal said in his statement that “no traces were found that students were whisked off from the university hostel.” The students declined his statement and asked to show the CCTV footage of 5 to 7 pm of November 1, which they say could not be covered due to load shedding in the area.