Home Articles The flood of 2007–a year of destruction 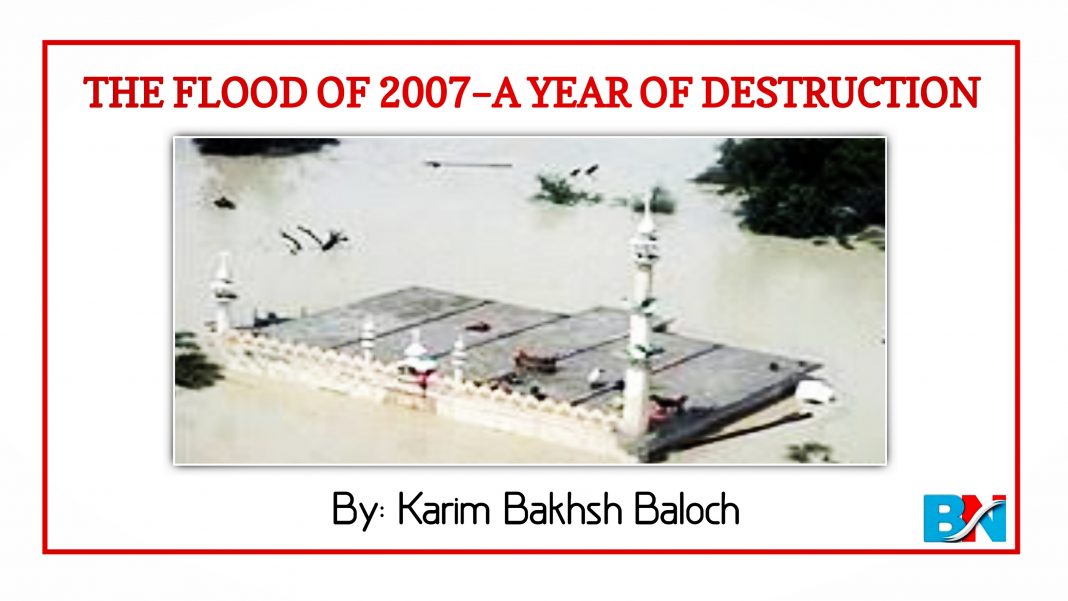 If you are destined to live, no matter what, you live!

The year 2007 remains one of the worst and destructive years in the history of floods in Baluchistan. The year in which our farms, our village and everything we had there destroyed. Despite these facts, I was indifferent between losing the blessing of a father, an uncle or an entire family out of those 36 people. The day was 26th of June, surrounded by water all around. The only dawn at that monstrous moment was the Mosque in Solband. Gloominess all around, they ran towards the mosque. When they reached top of the mosque, all they could see was water around. There was no adequate shelter to save themselves from rain. Neither any food nor any water to get out of hunger and thirst. They were bestowed with a fridge floating on water, the next morning, 27th of June. The fridge contained drinkable and eatables.

I wasn’t aware of what was going on. All I wanted was to get my father back. I could see the sadness all around; it had been two days since we couldn’t contact them. We had been hearing rumors of death. We had approached everyone, but none was willing to help due to the ongoing conditions of the weather. But as I stated earlier, if you are destined to live, no matter what, you live. On 28th June, at 11 am, those 36 people were rescued and brought back home. Among those 36 survivors, there were 4 females and a new born baby, rest of them were Males. I had 11 family members of mine on the Mosque.

Today, I’m on stage, happily with you Abba. You gave birth to me, prepared me for the competition, taught me how to interact with the people around me; you’re all in one, and I’m grateful for everything I have today. Despite the fact that you did not belong to an educational institution, I consider you to be my first and final family instructor throughout my life. You have always been a source of motivation for me.

It shouldn’t be forgotten that the people of Solband haven’t been compensated yet after these 14 years of despair by the Government.