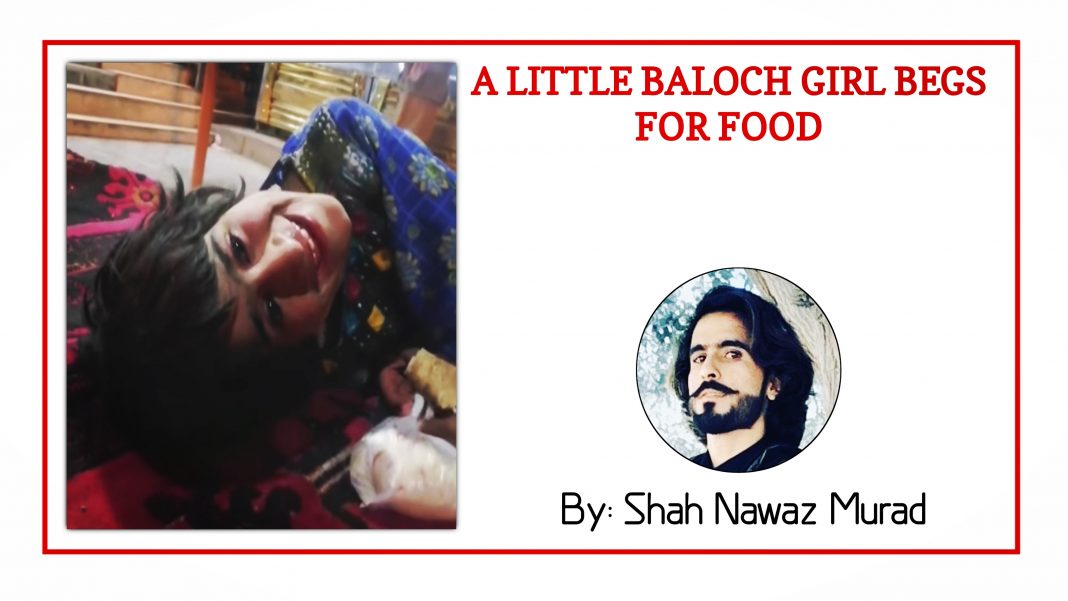 A short video clip of a little Baloch girl from Sui [Dera Bugti] was posted on Facebook a couple of days earlier in which she says that her family has left their hometown because of worse situations. Her father works as a cement mason but he does not always find a job, due to which, she, including her other siblings and mother, begs on roads in Quetta to make a living. She is barely 6 years old and regularly begs on roads despite belonging to the rich Sui town from where entire Pakistan is supplied with gas.

However, she is not the only to beg amid the streets of Shaal [Quetta], but many other families also wonder in the streets, in schools and hospitals, and main markets to beg so that they may get a little money to stay alive. One wonders, what makes a family from the rich-in-resources town to beg with torn clothes and without shoes?

In the video, the man asks him what she would do with the money if he gives, upon which she responds, “I would give it to my mother and she gives us food in return.”

“Won’t you buy Eid clothes with this money?” he asked further.

“What would I do with Eid clothes,” she replied innocently, “when I have no food to eat. I will give this money to my mother because she manages food for us with this money. We do not need clothes, but food.” she rests her head on the table and states naturally as a child.

Sui provides gas to Pakistan, which was discovered in 1952. The daily average production of Sui gas is 363 Million Cubic Feet per Day (MMCFD). Despite providing this much to the state government, the town’s residents are compelled to put forward their hand to strangers for five to ten rupees. So pathetic!

In fact, education of Sui is affected a lot in last couple of decades. The child reacts in imagination that education is not for them. It seems like the locals are intentionally kept afar from an education so that they remain the same illiterate and do not know what is happening around them.

The provincial government time and again shouts in social media that Balochistan is developing. One ponders, is it the development which the provincial government means? If Dera Bugti’s state is not changing in practical, how come we expect the other districts of Balochistan to prosper? In other words, Balochistan’s development is deemed by taking away the natural resources of the region and spending them on Punjab, Sindh, Khayber Pakhtunkhuwa and the Capital Islamabad, leaving Balochistan orphaned of any prosperity.

“We left our town because there was nothing for us. Everything is taken away from us. We are bound to move to certain places as security threats. We migrated to Quetta just to get three times of food so that we continue living.” She said in utter grievances.

Fundamentally, when the town is adding so much to the state’s purse, it deserves to be given back its share equally. When a small town of Balochistan cannot capture the attention of the authorities, how can we expect the entire Balochistan to get state’s notice?