Home Articles The Fate of Gwadar: An Historical Background To the Current Age 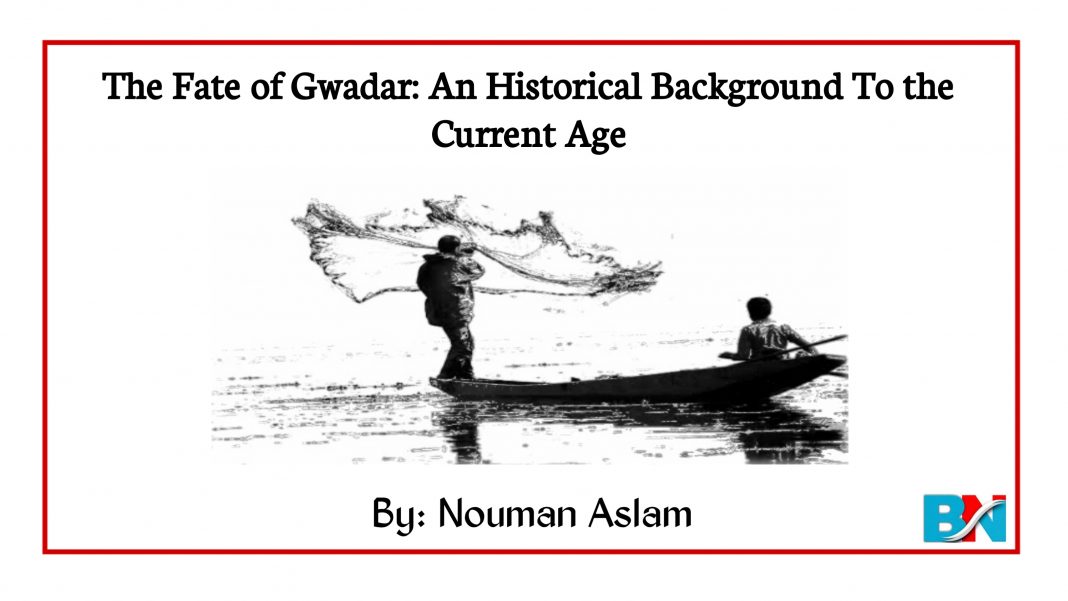 Balochistan has been historically important due to its geographical importance. Glancing at the former Great Britain colonial expansion or post Portuguese invasion, Balochistan has been a prime target to such doctrine, specially Makran region (Divisional part of Balochistan). In the modern Pakistani state, Makran consists of three districts; Turbat, Gwadar and Panjgur. Because Gwadar holds the sea portion, the premier target of the external powers was the this part.

The term Gwadar is the combination of two different terminology of Balochi language ‘Gwa’ derived from ‘Gwat’ means ‘Wind’ and ‘Dar’ known as ‘Door’. In the literal Balochi sense, the definition of Gwadar maybe pronounced as “The Gate of Wind”.

Gwadar is a port city on the southwestern coast of Balochistan, Pakistan. The city is located on the shores of the Arabian Sea opposite Oman. Gwadar was an overseas possession of Oman from 1783 to 1958. It is about 120 kilometers southwest of Turbat, while the sister port city of Chabahar in Iran’s Sistan and Baluchestan province is about 170 km to the west of Gwadar.

A timeline of Gwadar starts from Bronze Age which was sidelined from historical perspective till capturing of Makran by Arab-Muslim Army in 643 to Khanate of Kalat till Modern Pakistan of this era, this piece of land witnessed certain of invasions by Portuguese in 15th century and merger of Gwadar to Kalat by Noori Naseer Khan in 17th Century till the annexation to Pakistan in 1948.

As we earlier disclosed the geographical importance of Balochistan but major questions arise in one’s mind: why is Beijing concerned about Gwadar? That could be reasonable by Beijing as they owned a big investment over there titled China Pakistan Economic Corridor (CPEC), an economic zone of One Belt One Road and Silk Road of China on Deep Sea Port also called “The Game Changer” by Pakistan’s government many times. But here, one more question arises: under such narrative, why are the natives of Gwadar in particular and people of Balochistan in general much concerned regarding the game changing status and golden opportunity of the development of Gwadar? This is debatable with all spheres of a normal life from the Baloch perspective.

People of Balochistan have much affection towards their lands. An oppressed or colonized believes that a land is just not a piece of surface fastened to earth but a ‘mother’ that raised us in all circumstances.

From the eyes of the locals of Gwadar, the economical affiliation of them (the natives) are based on sea and fishing. What we witnessed is that inhabitants of Gwadar just owned a land and sea but the modules of development were deliberately depriving the people from land in the name of development. We also witnessed such times that the natives were not allowed to go for fishing in the sea. They have been concerned as to how they would feed their children. Such atrocities remind us of the Colonial Era of Algeria when people were starving from hunger and Fanon’s ‘Violence’ for replacing the Colonists was always their priority.

In the internationally recognised port city, unfortunately, locals are deprived of drinking water within the technological era of 21th century, what could be worst than such colonial mentality?

On our recent visit to Gwadar’s Koh-e-Batil, we witnessed in a newly created park on evening the guard was throwing out the natives because it closes for locals at evening. Fortunately, we were allowed because of our visiting status. This scenario took me to imagine that as to how ‘Two Nation Theory’ actually looked like if it had a face. Gwadar portrays one such gloomy picture for the residents of the city. One wonders, if it is what the development of Gwadar is meant?

People of Balochistan have historical affection with this small piece of land from bravery of Mir Hammal who fought against the invasion of Portuguese and shed his blood for this land and became immortal in the pages of history. Our affiliations are not only based on historical and heroic approaches, but our elders believe that if someone wants to love his land, they must pay a visit and spend their time within the coastal belts where they would get all their answers to love this piece of land.

The Breeze of Wind,

The Shore of Sea,

Whisper to us to glorify them,

Within the sphere of this land!