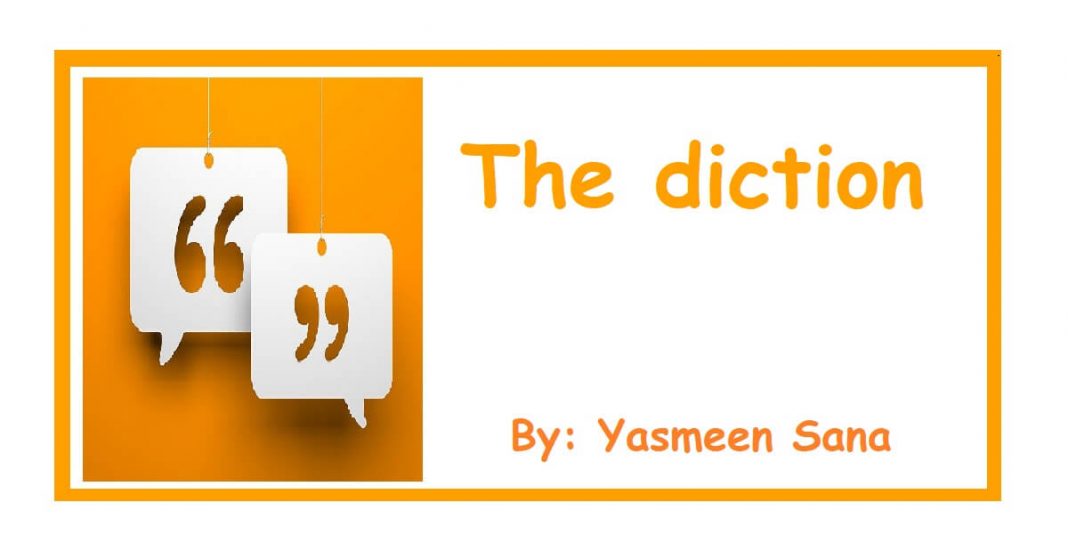 Diction is defined as “the choice and use of words, especially with regard to effective communication. The usage of effective and formal words in a circle or society is an art; every person does not possess this skill. Nowadays, people are offensive, worried, sad, and temperamental, due to which diction is hard. People lose their temper on tiny issues and start using slang and abusive language that leads to major disputes in families.

It is observed generally that people who use euphemism in their language, are less vulnerable to problems and conflicts. People have forgotten to be soft and calm during any problem or conflict. Usage of abusive and slang words is now a common creed in every society; mostly usage of slang and abusive words lead to misunderstandings and therefore misunderstandings mess up the beautiful relationships. This thing is not only common among the uneducated community but also among the educated community too.

Many well professionalized educated people do not have the tact to use formal language within their alike circles like; In Pakistani society many educated people use “Us” in place of “Un”, “tum” in place of “Aap”. Moreover, it can be clarified in a sentence that is mostly a part of communication like:
1-“tum muj se bath Karna chahte ho?”, —- “aap muj se bath karna chahte hain?”
2-Us ki moth hogai! ––wo foth hogae !
Such vulgar and informal language make the communication less effective and people consider the speaker uneducated and illiterate. In order to break off the culture of abusive language, this skill should be taught to every child through actions, parents should avoid using abusive language and they should promote good culture in houses.

Secondly, people do not know where to show the power of anger and where to use formal and informal language. Speakers should keep the environment, the setting, the title of topic and the listener in consideration during beginning the communication.

Mostly, it has been observed generally that people get angry and do not talk with us and we feel that the anger is of no use, but the anger arises due to the usage of our words that hurt people and people get angry. The usage of abusive and slang words amongst the youth is also an alarming sign; they keep interacting with people who use slang words in their language or unfortunately some parents use abusive language in houses that builds the mindset of the child the same way. This thing has also been observed amongst the kids during their critical periods who learn slang and practice them with their parents and elders.

It is difficult now to control the excessive usage of slang and abusive language and this is increasing because kids and youth have deleted books and reading from their everyday routine. Books filter the language and help one keep formal, soft, and more effective diction.