Home Articles From the pages of a thalassemia patient 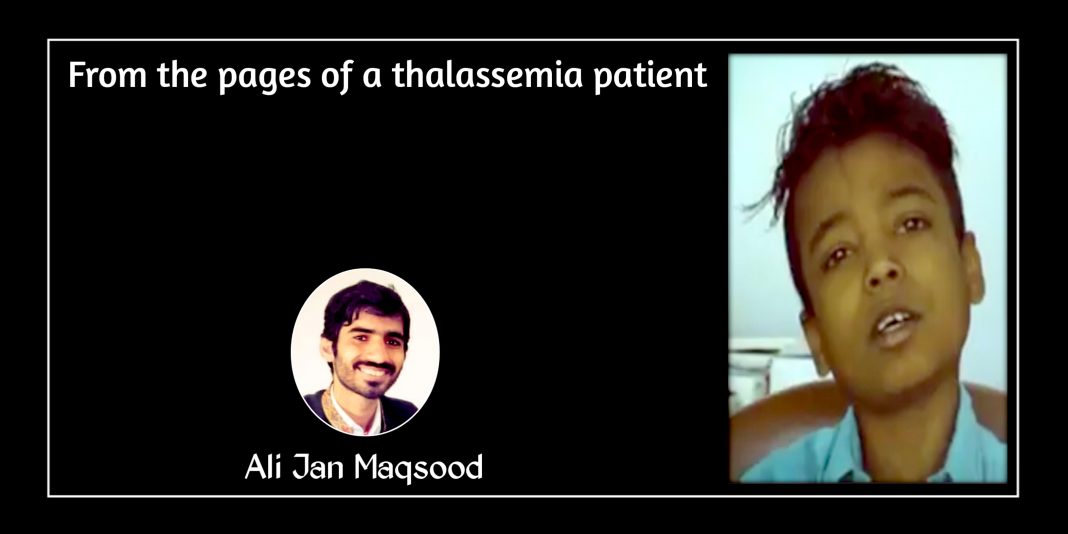 Amidst the narrow streets of Turbat, a city in Balochistan, walks irksomely a 15-year-old thalassemia patient, Fahad Baloch, in quest of AB+ve blood [because of no blood bank in Turbat], and gets home empty-handed, usually. In very infrequent cases, he finds a donor himself. When he fails to get one, his uncle takes over the streets and markets of the city, phones everyone in his contact list and visits civil hospital to look for a donor. Because Fahad needs blood twice a month, getting a donor in ten days is mandatory for the little being. On the other hand, his father works as a labour to bear the other expenses of blood transfusion for his son; RS. 200 are taken by the hospital administration, and a bag of RS. 550 is to be bought by him, too, on his own outlay.

Fahad, on his feet, traveled from person to person, house to house and shop to shop with all the thalassemia outcomes plainly visible on his body, but people appeared less sympathetic towards him. “Life is not same for all,” says Fahad. “I fared for hours hunting for a donor, but everyone had their bags full with different vindications, like; we have recently donated, we have less blood, our blood group does not match, and many more.”

In the Baloch society, a lack of awareness has resulted in deeming blood donation a dangerous phase in a normal body, despite the fact that it contains multiple benefits. The other factor is family restrictions, who are usually uneducated and thus feel it brings about peril on their health. How if the same person requires blood someday, shouldn’t he or she be donated blood?

Unsurprisingly, life of a thalassemia patient runs on blood. When they are timely given blood, they are alive and fine; a little delay in blood transfusion makes things look odd in their life. “Sometimes when I was little late, deficiency of blood made me fall stake at home; I would recover once blood was transfused.” Fahad tells me looking down, trying to escape his tears from falling.

To note, before and after three days of blood transfusion, Fahad’s routines are disturbed. He cannot sit for long, walking and playing are far a cry, and his body aches. It has, in the long run, hauled him to be one of the out-of-school children in Balochistan. He is, in fact, fond of getting an education and making a name for himself, his family and nation, but he is not off thalassemia pressures, obtaining education only sounds a daydream for the little child.

“I wish to secure education and become a hematologist [a specialist in hematology, the science or study of blood, blood-forming organs and blood diseases] to treat thalassemia patients as their life is so hard,” Fahad wonders with spark and disappointment in his eyes at the same moment. “I would treat them freely because not every thalassemia patient affords a treatment.”

Fahad has grasped haplessness and poverty himself. He once journeyed to Karachi to seek treatment [because thalassemia major patients only need Red Blood Cells, a direct transfusion without machines includes iron in their body which results in multiple side effects for the patients, sometimes causing death], which is not available in his native city, but a fall of money brought him back to the streets of Turbat. “I remember when a doctor in Karachi looked at me and said that I needed to get admitted in hospital for four months, but charges were much. He said he could not do anything about that, so did we; we returned back.”

Suffering from the by-birth disease, Fahad thinks only blood transfusion is not an enough solution for him. No matter if he needs blood transfusion lifelong, a treatment along with transfusion would increase chances of his good health in other times, which would, in one or the other way, made it possible for him to join a school. “As treatment requires much money, I ask the government of Balochistan to support Kech Thalassemia Blood Bank by providing the necessary machines, medicines and injections so that we get a hope to living a better life,” Fahad requests his representatives in national and provincial assemblies.

Hence, government should work on practical grounds to furnish all the basic necessities of health, which the constitution has vested to the citizens. Article 38 (d) of the constitution of Pakistan, 1973, reads; “Provide basic necessities of life, such as food, clothing, housing, education and medical relief, for all such citizens, irrespective of sex, caste, creed or race, as are permanently or temporarily unable to earn their livelihood on account of infirmity, sickness or unemployment.”

Besides this, donating blood is never perilous unless you are healthy and have required hemoglobin. Nonetheless, it helps you in maintaining a better health. Above all, your donation serves humanity, and brings a smile on the faces of the little children, whose lives rely on blood only.

Secondly, government should set various teams of experts to launch campaigns, especially, in rural areas, so as to cease the number of thalassemia patients from mounting. Thalassemia minor tests must be available in each city and couples must be obliged to go through their tests before tying the knots. Albeit, thalassemia has no permanent treatment by now, controlling it from the word go can go very healthy.