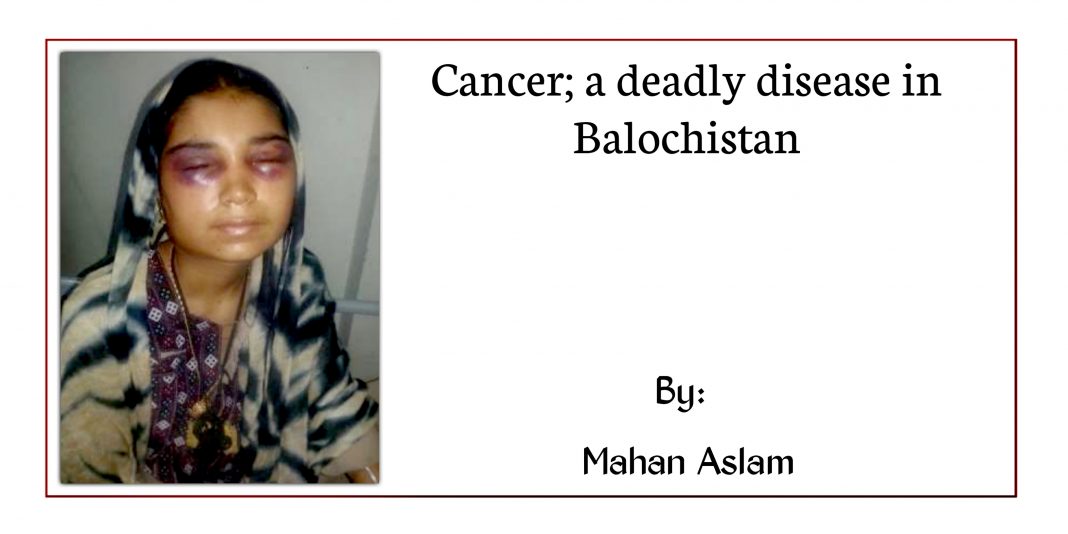 Balochistan is the most backward province of Pakistan with rich mineral resources. The province lags behind in every aspect of day to day life. Sadly, the very fundamental right of health is at stake in Balochistan with improper healthcare facilities, ultimately, resulting in multifold health-related issues.

Out of so many life-threatening diseases, cancer is one of the leading one causing to multiple deaths in Balochistan. The toll of cancer patients is increasing. So as the death ratio, which is alarming. Nevertheless, no home in Balochistan is left where we do not find a cancer patient.

One of the biggest reasons of outnumbering cancer patients is a lack of awareness. People neglect the initial symptoms. When it gets severe or in last stage, they become aware of it and lose their lives. Similarly, others, who are diagnosed with early stage, do not get proper treatment, consequently, leading them to lose their lives.

Moreover, the poor healthcare system of the province makes it even harder for the residents to have their routinely check ups on their health annually. As the province is orphaned of basic health facilities, treatment of the given fatal disease becomes impossible for people with financial crisis. The poverty ratio of the inhabitants of Balochistan is not a secret. Despite being rich in resources, the province is reported to be the most poor in living standard.

In addition, cancer does not only affect the body, but it has massive impacts on emotional health of the families who have been affected. In 2019, I lost my maternal grandmother due to liver cancer. Very dishearteningly, I lost my paternal grandmother due to this deadly disease too. To add, one of my cousins, who was only 17, was diagnosed with Hodgkin lymphoma in 2018. She was lucky enough as it was diagnosed early. She fought with it bravely and survived.

After having personal experiences within my family and losing two of my beloveds, I feel it has impacted everyone emotionally. You are always vulnerable what if you are the next to be diagnosed with.

Henceforth, everyone in the society_ be it our health sector who is responsible to provide us with better and affordable facilities or the educated members who are working on this cause_ should work end to end to reduce the numbers and contribute in every possible mean.

No doubt, cancer is a deadly disease. We cannot stop the danger, but we can prevent it. Do not ignore when something unusual happens in your body because early diagnosis can save lives. Spreading awareness can increase the years if patient is diagnosed in early stage. Better health facilities can decrease the numbers. Government of Balochistan ought to think of policies on prevention of cancer_ or at least setting different teams to spread awareness on cancer.