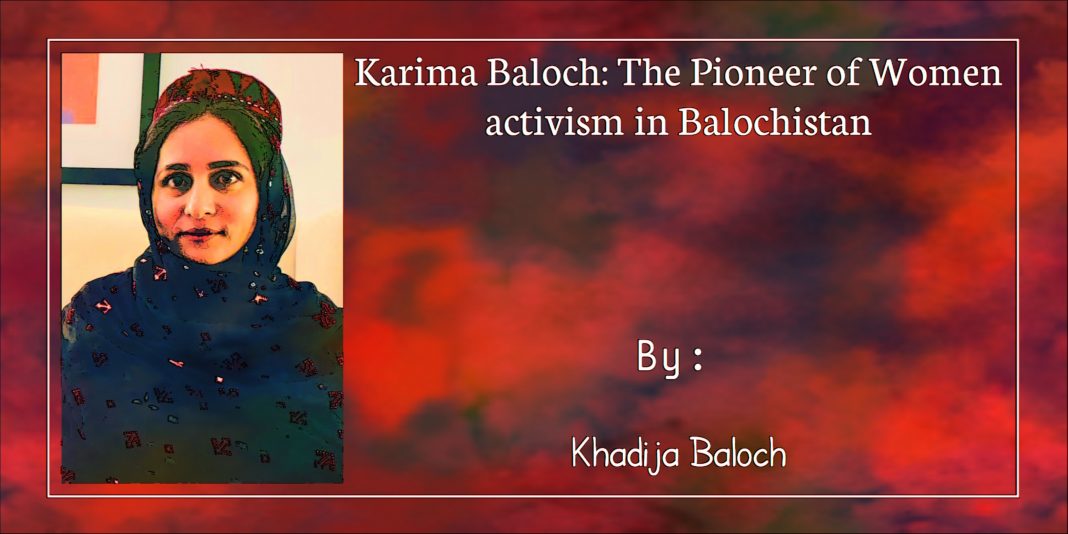 Banuk Karima Baloch was one of the leading political activists of Balochistan. She is a role model for every girl in Balochistan struggling for their fundemental rights. Banuk Karima Baloch is one of the founders of political mobiliser among Baloch women. She also had the honor of being the first female head of the organisation in the 50+ years history of the Baloch Students Organisation.

She had sought political asylum in Canada to raise her Voice for the Oppressed People of Balochistan. Banuk Karima Baloch’s consistent struggle attracted National and international media outlets, She was Among the BBC list of world’s 100 most influential women in 2016 and She used to raise the issues of Balochistan in the UN sessions in Canada and Switzerland.

No where on earth Balochs are safe if they are the vocals for rights in this country or being in favor of the victims of enforced disappearance and genocide of Baloch nation. They are insecure of existence of such powerful National leader like Banuk Karima Baloch.

Disappearance, torture and death do not spare the Baloch even in the most safest countries of the world. The recurring events of Baloch activists missing and dead abroad is alarming.

If we do not fight for our own defense such heart wrenching incidents will continue to occur. The enemies must be happy that they extinguished a shining lamp, but this is just their forgetfulness, you will find a thousand Baloch girls like Banuk Karima in Balochistan ready to burn like a lamp to make the future of struggle in Balochistan brighter.

Banuk Karima Baloch was a brave and outspoken leader who fought hard for the National Rights of Baloch nation. Karima Baloch’s prominent role in raising political awareness among Baloch women and her Pioneer role in Women Activism in Balochistan will be written with golden words in the history of Balochistan. She was an inspiration and her contributions will remain in our hearts forever. Her determination and works will keep inspiring Baloch women. Samoo Raaj will follow the legacy of Karima Baloch and Our Struggle prevails till we reach our Destination.