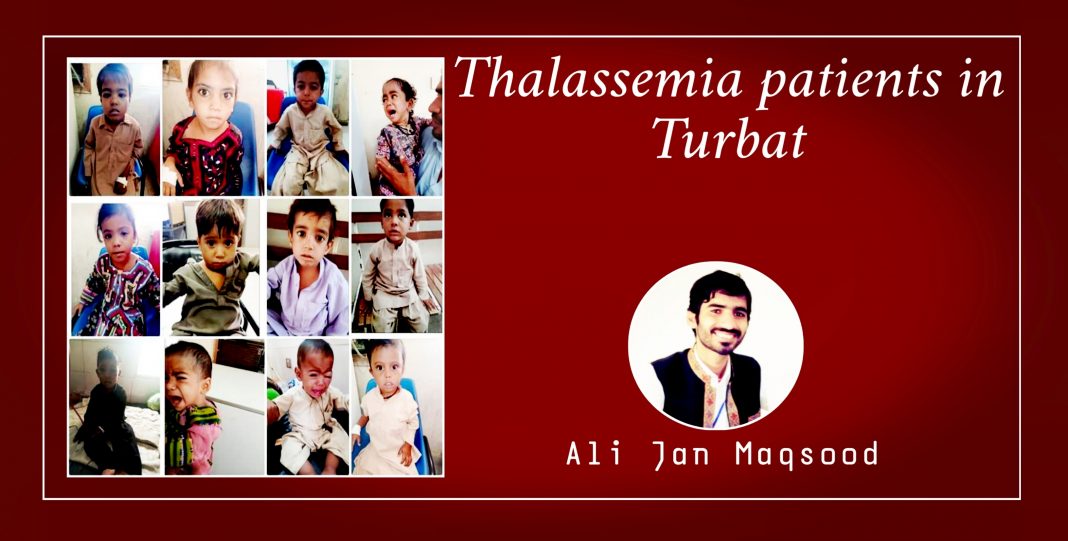 A significant amount of thalassemia patients [children] in Turbat need blood, either monthly or after every 15 days; some others need blood transfusion even earlier than that.

Sadly, the city lacks a Thalassemia Centre enhancing the clouds of worrisome for the patients coming from the nearby villages.

The families of the little patients wander here and there, beg haplessly to passers-by and visit college and University_ where they often get donors. But, to a great misfortune, they sometimes fail to get rare bloods [Negative groups] in educational premises as well causing the children to suffer from difficult times to cope with their disease-by-birth.

Health, however, is one of the basic rights of the citizens of Pakistan, as per the Constitution of Pakistan 1973. Why not the government, if they will, build a Thalassemia Centre in district Kech to facilitate the outnumbering thalassemia patients of the district_ nevertheless, the division?

The district votes and sends four members to the Provincial Assembly and one to the National Assembly, but sadly, they fail to convince the higher authorities in order to change the fate of the people of Kech. Consequently, the citizens of the region give least importance to participating in general elections, for they lost confidence on the “participated candidates”.

As per the monthly report of KTBB, they donate maximum 25 to minimum 10 bloods per day to the patients of thalassemia; more than 400 bloods per a month. They set up different camps in and out Turbat city_ with an NOC from the MS of Civil Hospital Turbat and Deputy Commissioner Kech_ to collect enough bloods for the thalassemia children.

Worth notedly, the Blood Bank lacks financial assistance from government and local body, whereas, they contribute from the well-to-do people of the city and run it on their support.

The Blood Bank, howbeit, suffered from a great financial crisis in earlier days including deficiency of necessary equipments, but the team never lost hope and stood tall and strong with their self-support. The KTBB now have a separate office for them helping out the Blood Bank to seeking attention of the politicians towards them.

On the other hand, when I had my conversation with Civil Hospital administration, they told me a growing number of 291 Thalassemia patients are registered in Civil hospital Turbat_ many others go privately to transfuse blood whereas some others make their way to Karachi for treatment. They appreciated how Kech Thalassemia Blood Bank was working so passionately in the district and have always stood with them shoulder to shoulder in some possible means.

Important point to note is, Member of Provincial Assembly and founder of Pakistan National Party (PNP) Syed Ehsan Shah, in a statement, quoted “He would ensure a Thalassemia Centre is made in Turbat city the soonest.” but only if he can stand to his words, is yet another paradox.

All we need to look forward is how the government is going to deal with the little souls infected with the fatal thalassemia disease. Howbeit, a Thalassemia Centre in Makran would likely help the poor to getting an adequate and timely treatment. The little children always look forward to getting blood other than anything else in the world. That is what keeps them alive.