Home Articles A different human being? 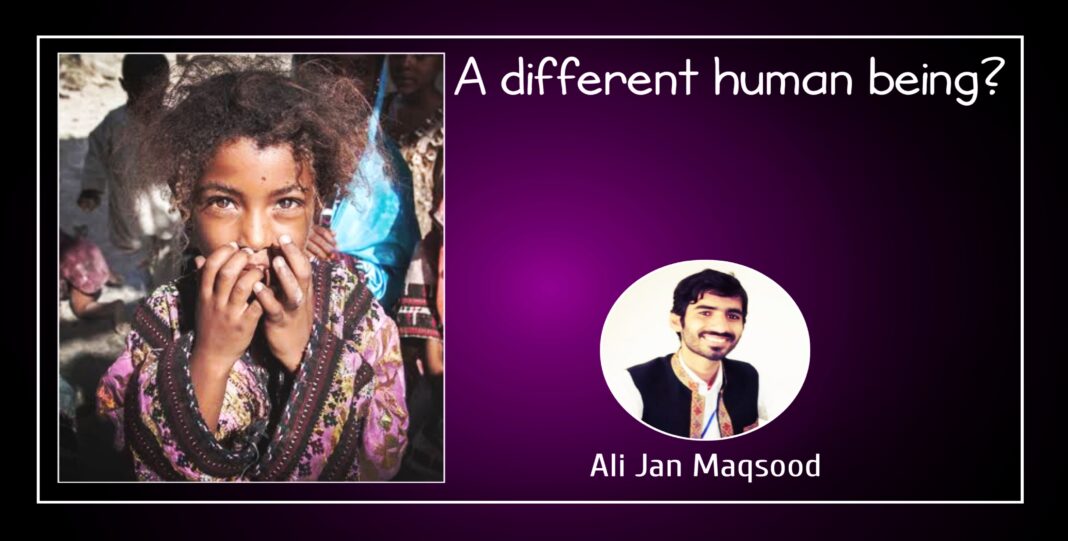 Samin Baloch, hailing from somewhere in Balochistan, faces severe disturbances in his daily life due to the words he is said based on his caste. Less people in his village befriend him calling him a gulam [slave]. When he goes to school, everyone teases and calls him a ‘seyahe gulam’ [black slave]. Some of his other class fellows even refuse to sit with him. Consequently, he quits going to school and searches for a job. After some times, he succeeds to getting a work as a labor.

Balochistan is the land of castes. One can find a number of castes having long roots from way back. Some castes are highly respective and some are degraded to the least level of honor; some are not even served with anything equal to others and some are called outsiders; etc. Beneath the caste system we have lost the main purpose of our life; humanity.

One such story is of Samin. He says he has spent twenty [20] years with his villagers and all he felt during this long spam of time was, he was never meant to get together with them only because of his caste. “My color is the other factor they guess my caste and often question on it.”

It was never his wish to born as a black and a caste of slave, why is he getting to bear the worrying consequences in this small age? “My villagers often tell me I belong to the caste of slave and it is what my life is meant,” Samin says.

When do our people understand it is not the caste and color that decide how we are, but the society which we surround! “It is our fate to be animals amidst ‘human beings’,” he often cites.

Most dishearteningly, they [villagers] do not usually allow their children to play with him declaring him an “ill-fated slave boy”. They think he brings with him their bad luck.

Huh, what did that mean? How could a small child decide someone’s luck despite knowing very well that fate is written from skies, which is clearly written in the Holy Quran as well. “This is how we are generally treated here,” he laments.

Samin says he sometimes feels as if he were a different human being_ like an alien. If he were an alike human being as everyone else [in his village], he would have been treated same as they all were. He now feels fear from his own shadow.

He has quite a time thought to commiting suicide, but when he recalled his family, he could not go ahead. As he was the only son of his parents including four other younger sisters. His father had died in an accident; a rich man of their society was drunk and hit him whereas they held his father responsible for all that. “Even in mistakes of their own, we are alleged for the causes.”

Samin literally had no best friends. It was because he was afraid if he made such one his best friend, in case of any natural or other incident, he would be brought to question. He had no one to share his pains with and has been bearing everything in himself.

“Sometimes when I feel the pains are overloaded, I look at the moon and complain to Allah the Almighty of His “human beings”. I sometimes think may my prayer also does not reach to Allah for I am a slave, but then I realize Islam is beyond caste and color,” he tells me with tearful eyes and a broken smile.

Above all, Samin was only a child of seven [7] when he was thrown the bundles of allegations and false statements based on his caste and color. How come a human being be cruel to this level to a likely human being? Islam never tells to discriminate among the human beings neither does humanity adopt such policies.

All in all, Samin’s story is a real surprise for me. I was already in the know of the caste system we have, but its implementation to such a level was out of question. No matter to what caste they belong, they are human beings. They had not decided what caste to born, why are they held responsible for that decision which they had never made?