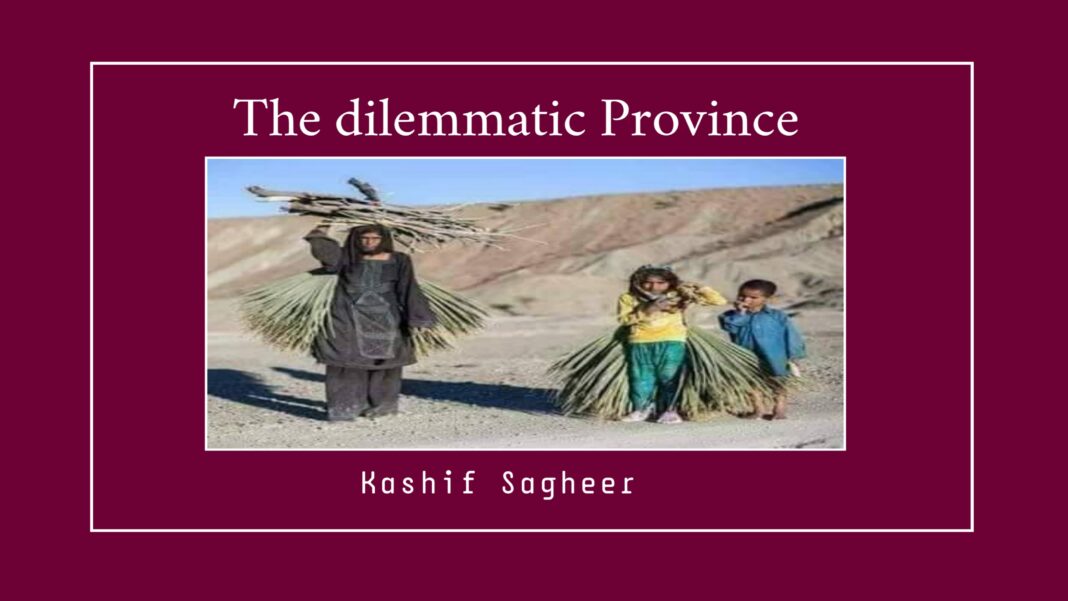 Balochistan is the skeleton of Pakistan and archetic for boosting her economy. The province is luminating Pakistan’s fate, but in return it is availing the mere negligence of the governments. The negligence of regime echoes a quote, “Don’t bite that hand which feeds you.”

Furthermore, Balochistan is in looming, lingering and persisting dearths from a long. As there appears to exist a certain number of issues which are; lack of civil Cancer hospitals, burn centers, qualified governmental teachers, governmental schools, colleges and universities assuring standard quality of education, unemployment which is giving birth to horrible and illegal activities and child labour_ particularly more ubiquitous in Balochistan than other provinces.

Additionally, there are some damn intimidating occurings that are not tackled presently like stealing and killing mafias. As in late month of June a woman was killed and her little child was attacked. It was a midnight robbery. The martyred is Malik Naz and survival is her four-year-old child Bramsh. What makes everyone feel a pang is, the culprits of martyred Malik Naz are not condemned yet. Kulsoom Baloch of Dazin has also faced like troubles and is not given total justice yet.

Besides Malik Naz and Kulsoom, another case of death of a policeman sparked recently who belonged to Malikabad. He was forced to get his bike to the goons but he defied to do so. However, the murgers shot him dead in order to achieve his motorcycle and other fancy materials. After such consecutive occurrences it has brought with it the scent of fear across the city.

As Balochistan is having a gigantic share for the stability of the country’s economy, the province is getting nothing back. But the other provinces are getting what ought to be given to Balochistan despite they are doing nothing as important as Balochistan is to promote the national economy. I still cannot reckon to call it our ill-fate or government’s negligence.

Above all, the crisis of a Civil Cancer Hospital is leading the remote citizens in grievious conditions and deaths. There are multitude patients of cancer in Balochistan. Owing to living in remote terrains and privation they are not diagnosed yet. Even they do not go to the hospitals of other cities for dignosing common ails because of their costly services and prescribed elixirs which are beyond their approach. Having not a Civil Cancer hospital is like provoking the death. At the moment we do not get to have any active and great functioning hospital in suburb areas, even not in cities which arouse my pang.

It squzes my heart, China Pakistan Economic Corridor (CPEC), which is Pakistan’s biggest, supreme and prestigious project_ and according to the projections it will trigger Balochistan’s luck from the pale into luminous_ seemingly looks snatching thousands of fishermen’s wages, taking the inflation to the brink, obscuring Balochistan from development and waging a war of contention between the government and its civilians.

Keeping the fingers crossed towards government for good and fair eventualities has become a mirage. No one can evaluate the procession of adversities and hardships that yet pertain static.

Whenever an imperceptible ravage occures in Kashmir, a wind of levanter of news with extra spicy starts blowing hardly across the state as ever. But unfortunately, in Balochistan on daily basis more panics are in visible which neither get into attention of the media for broadcasting nor of our governments.

Recently, Balochistan’s students were scattered across Pakistan for the rejection of online classes due to unaccessibility of internet service in most of the outskirts areas of Balochistan. Ill-fatedly, students were beseeching for assistance to the Media to directly put forward their dilamatic issues. Disappointedly, the response students got was only ignorance. Even though we have no data services in major cities like Turbat, but they (medias and political leaders) seem to close their ears when it comes to Balochistan.

Hence, I plea to the government of Pakistan to set a full stop to this chapter and provide equal attention in terms of equality and rights to the province (Balochistan). The province gives much, why is it dragged behind when it comes to giving back?