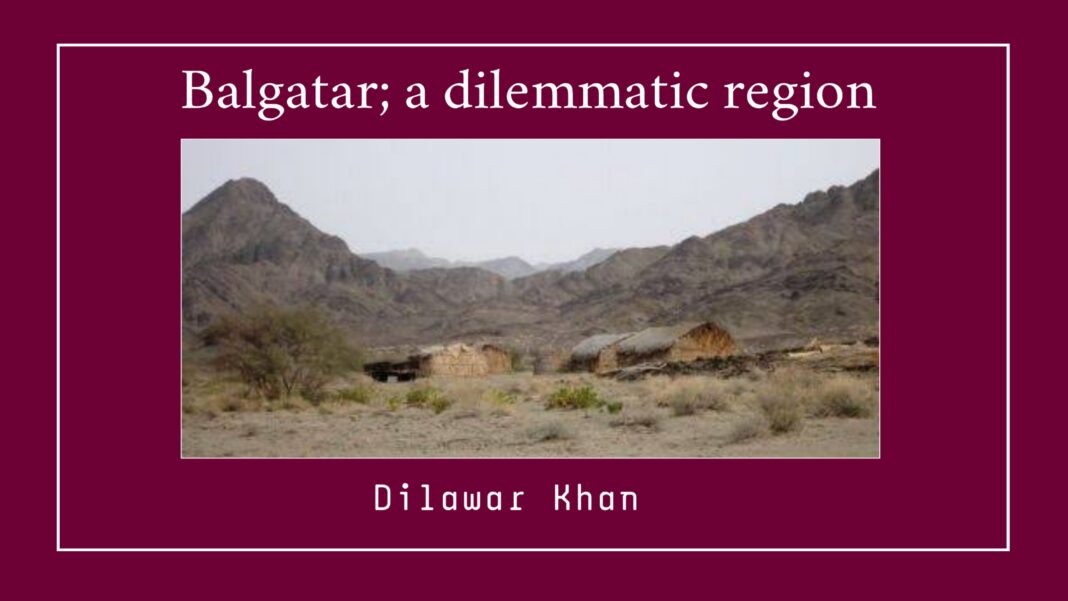 Balgatar, an area consisting of 27 villages, located somewhat 150 kilometers in the east of Turbat city with an average population of 50,000 people, faces multiple problems in this technological era. Sadly, the area lacks the fundamental requirements. The major problems are a fragile educational system, health crisis, no pure drinking water, no electricity and lot more.

From the given woes, the main rooted issue by which the residents face these all problems is lack of education. There is demand to recover these problems very soon so that the locals also live in the real sense of twenty first century.

However, getting education is the basic right of human and so as the constitutional right of every citizen of Pakistan. But the people of Balgatar have lost their right to getting education. When we have a glance over the lists of schools, we get surprised: there are just four primary and one high school. Unfortunately, out of five schools, only two schools are in function with solely five teachers: the only high school has four teachers, and one teacher in a primary school. There exists the buildings of one more school but not completed yet. Other schools are either with no teachers to teach or have never been known to the local population with no buildings and other facilities.

There are many talented and well educated students in Balgatar. They have gone to other cities of Balochistan to get education. Most of them have B.ed and M.ed degrees.They want to serve their people but there is no source for them to give service. They are working in other places to earn for their livelihood. Government should announce new posts so that they get the chance to teach in their own region.

Balgatar is blessed with a great area of land. It has an area of around 1436 square kilometers. The fields of Balgatar are suitable for cropping. Dishearteningly, by the lack of electricity, most of the fields are not utilized.

The work of electricity was started in 2010 in Balgatar. Now in 2020, after ten years, the work is still in the process with no positive effects. We still use the old means of life to survive. The water is stored in mashk (goatskin) for cooling. In night it gives the scene of an horror movie because of no light.

Apart from education and electricity, we lack hospitals too. There used to be a hospital some years ago, but now the building of hospital is almost broken. For any case, locals need to travel to Turbat. Most of the emergency patients die on way.

On the other side of the picture, maternity cases are solved by the old women of area. They lack proper guidelines and trainings about maternity cases. By it one can guess the conditions of health in Balgatar.

To bring into your attention, some youngsters travelled to Turbat and other cities to study. We have diploma holders in Balgatar: Male Medical technicians, Female Medical Technicians, midwife and dispensers. But they are all jobless. If we get a hospital, we do not need despensers from outside. We can manage it.

All in all, Balgatar is in desperete need of attention. Be it education or health, infrastructure or job opportunities, Balgatar needs to be taken along the road to advancement.

On the other hand, Higher Education Commission has announced of online classes. Unlike the state, in Balgatar there is only one Zong tower and it does not work properly. The tower runs by solar sets. In night it is impossible to find signals. To send a message or call, one has to climb over tall mountains.

There are piles of problems. With weak educational sector and lack of health facilities, it is very tough for the people of Balgatar to survive in this modernized era. Likely, we have many problems but the education, health and electricity should be resolved very soon. We expect these problems come under discussion soon.