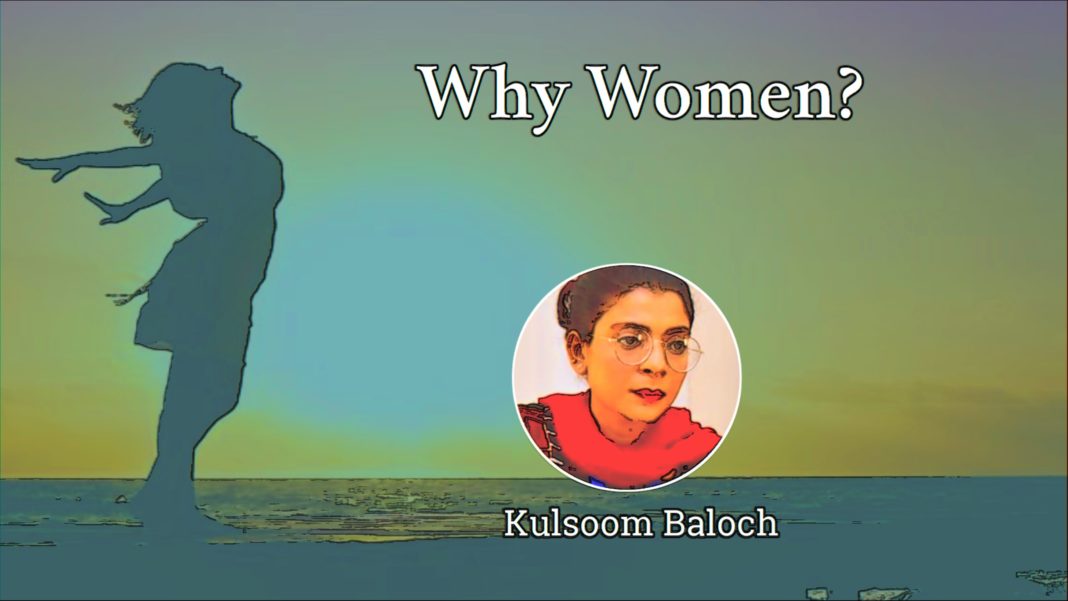 Feminism or asking for Women Rights doesn’t exist to hate men nor it’s anti-man thing but it demands the justice, equality, equal opportunities, all basic needs/ facilities and also demand end of violence against women.

This is strong, deep – rooted and rotten patriarchy that couldn’t identify and accept the reality of men because of so-called privileged power that given to them by society in the name of religion and culture etc. Though, these are the consequences of male dominant society where one woman considers other woman her enemy to acquire the proof of a man, for that they can reach any level of competence.

Moreover, Women is most vulnerable and easy to target no matter from which background she belongs, she is answerable to all! Nevertheless, I stand with Women who have been suppressed and oppressed in the name of gender, cultural, moral policing, hypocrisy, patriarchy else with inhuman state policies due to which Baloch Women have been suffering for demanding rights to live.

I wonder why and till when women are blamed for everything! The new burning issue of Uzma Khan is the example, though she’s an empowered woman but answerable infront of other powerful Woman for her relationship justification!
Why you are asking a woman about her relationship why not asking your man, why blaming woman over ruining your married life, why you asking woman about her sexual life why don’t you ask man, why she should be shamed why not your man, why man has authority to decide with whom he will be in relationship but woman can’t if she dares, she will be punished.

Two days before this happened with Uzma Khan, where she was blackmailed, harrassed, beaten and her personal and professional life were ruined just because she was in relationship with married man who have been cheating his wife for two years . However, according to Usaman’s wife Uzam Khan is responsible for breaking her life not her husband, he has nothing to do with anyone! Apart from one gender blaming culture in Pakistan you can easily show off your power by using the name of any state institutions like Usman’s wife said to Uzma Khan “I will call ISI to kidnap you”, I mean now Pakistani institutes started this job to protect married life of powerful privileged families like, Malik Riaz daughter’s Em!.. this shows that your constitution is by form but not applicable, if it’s applicable, then where is your constitution article- 14 in here Uzma Khan case and in Balochistan where Baloch Women asking for fair trail for their missing families members.

This case is strong from both Uzma and Usman’ s wife, for me these two women are empowered women also have excess to defend and talk openly over things.

Unfortunately, majority of Women in Pakistan aren’t privileged nor have support to talk over harrassment, rape blackmailing etc. As few times ago in Turbat one video scandal happened and two Baloch Women beaten and harassed by neighbour men, last year harassment issue of Karachi University, Balochistan University video scandal, weeks ago happened with teenage Baloch girl in Turbat also there are so many rape cases in Balochistan weren’t reported nor even victims allowed to shared with anyone, also such harrassment happened on social media also on ground especially when you are active, further, Baloch missing persons families (Sisters, daughters, mother’s) have been facing harrsment from decade’s not just in missing persons camps but also on social media when they posted anything regarding the recovery of their love one’s, yesterday one Woman was killed and her daughter Bramah admitted at Hospital, though culprits were identified but still they are free, these cases along with many in Balochistan don’t get justice because of this collapse system women suffered more.

Sometimes in the name of fundamentalist cultural norms and most of the time by state policies. Baloch women’s issues are different from the day one also ignored deliberately, Baloch Women need a support and continuous social movement and forum to raise and confront these issues bravely without depending on others, this is the time to stand on for Baloch Women Rights for their support and participation for policy making too in future, but this could only be possible if we come out from our zone for showing one concern and contribution for our Nation and for Baloch Women.