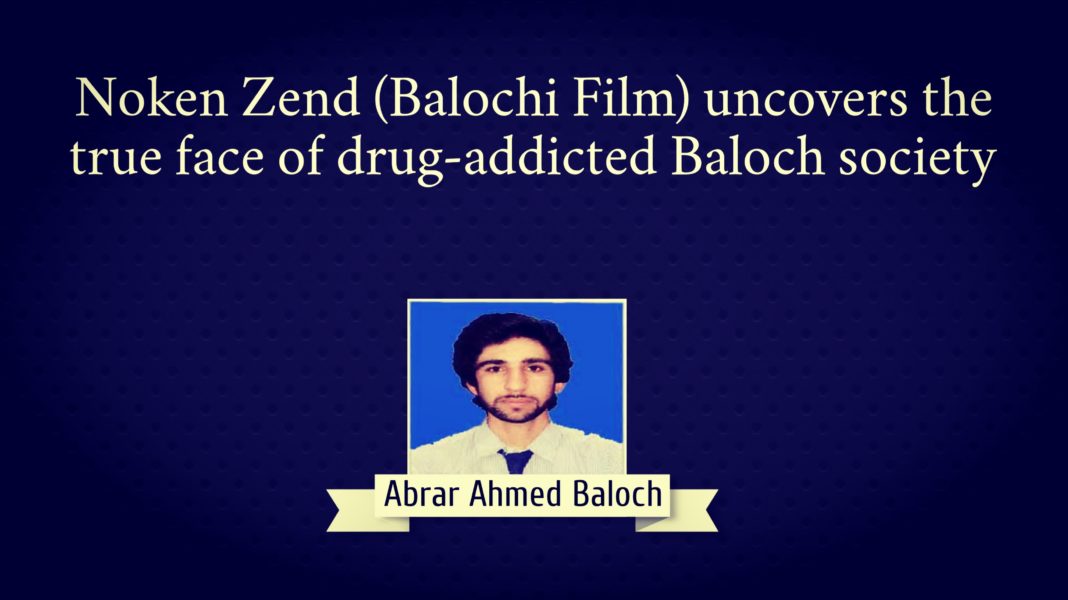 The film ‘Noken Zend’ (new life) is one of the best films of the Balochi film industry. It exposes the true image of the drug-addicted Baloch society and how the society is falling prey to drugs. It also exposes who are actually behind spreading drugs in the society.

The director of the film is Fazal Hayat who is not only a great and talented filmmaker but also a well-known actor with extraordinary potentials in acting. Aside from well-charactrization, each film of Fazal Hayat carries a logical and real massage for the community.

The film begins from a gathering where people are assembled around a pile of rubbish, as a drug addicted dead body is dumped there. In this gathering, the father of drug addicted, Shahdad, laments on the death of his son.

“He was my only son. I hoped he would be a great person and make me proud, but he became victim of drugs,” he vociferates loudly. “How can I hold my head in front of society now? My son died in this horrible condition taking away all the respect and honor with him.”

Observing this unbearable event, a man named Murad realized that if he let his son to live in this society, the day would not be far when he would see his son in the same condition. So, he sent his son to the city to aquaire education and become a great doctor. He wanted his sone to save the youths of the nation from the scourge of drugs and serve them new lives by being a doctor.

After some years, eventually, Shahdad’s son’s (Chakar) persistent hard work and determination made him a capable doctor.

When he returned to his area, he found young men burning in the fire of drugs and involved in shameful acts like stealing things from their homes and selling them for very low prices for sake of few pups of drug, wandering on trash heaps and begging to the people.

He felt saddened and pity seeing the wretched condition of youths of his surrounding. He thought in mind that they should have graduated from universities either or should have served country by holding accountabilities but they were disturbing their lives along with their families’.

Although this was a spark of hope for the society, it remained an obstacle to the so-called business of drug dealers.

Therefore, drug dealers tried different ways to close the hospital. Many times they offered money to the doctors to stop it, but they refused. The doctors even got several threats but they stayed firm to serve the humanity and defeat the evil.

Finally, drug dealers bribed the police and police arrested the doctors accusing them of working illegally in the hospital.

However, the film conveys a great massage to the Baloch society that drug dealers are their real enemies who are destroying the society for getting richer. It also cautions the youths by showing the evil and miserable conditions of drug addicts. Besides this, the presence of Dr.Sammi along with Dr. Chakar and Nasir, reminds us that the female can equally be helpful to the society and are able to play a pivotal role in community. Hence, without them a society is incompleted.