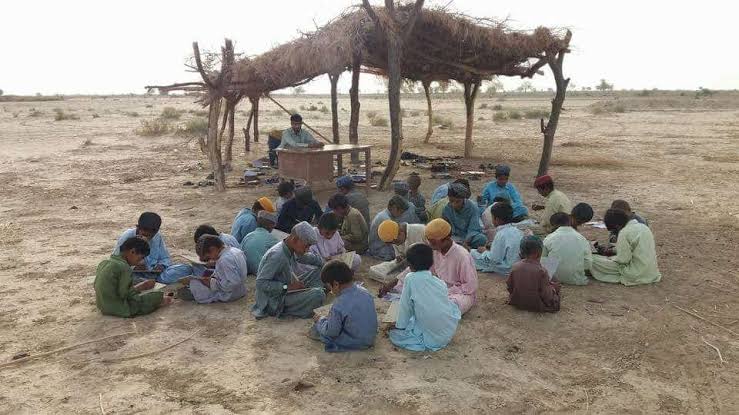 Balochistan, the province with lowest population and abundance natural resources, is the least developed and facilitated region of the country. The province has been the largest contributor to the country’s economy because of its vast oil, natural gas fields and multibillion projects like China Pakistan Economic Corridor(CPEC), which worths above than 56 billion dollars, Saindak, Rekodiq and hundreds of other valuable resources.
Since the inception of Pakistan, Balochistan has been home to multidimensional problems. If one figures out the rank of Balochistan, it is on the top of every list, be it poverty, illiteracy, child labour, drug addiction, child mortality and many more. It is shocking that despite being the most-resourced-rich region, Balochistan vociferates in every sector.
Balochistan’s education system is the worst throughout all the provinces of Pakistan. It would not be considered wrong to say that Balochistan’s education system is of the nineteenth century. In this modern world, educational institutions are digitalized, but Balochistan’s  schools are deprived from fundamental facilities like classrooms, boundary walls, electricity, potable water, toilets and so on without which an institution is incomplete.
According to reports unleashed by Alif Alian, there are 12,500 primary, secondary and high schools among which 45% of schools are deprived of drinking water, 56% are without electricity, whereas 80% schools lack sanitation.The devastation and deterioration of essentially required facilities adversely affect the reading environment.
Apart from these, the two other crucial parts of an school are libraries and laboratories.These facilities are rarely found in any of the city’s schools. The absence of library and laboratory further hampers the quality of education which could lead to further dropouts in the schools.
As educational institutes, they must have conducive environment for learning. Most schools in Balochistan do not have the desired environment. One of the most important factors which has destroyed the environment is missing of co-curricular activities. Extra curriculum activities include sports, programs and other competitions which are essential for shaping a friendly culture and increasing students’ interest towards education.
Lack of teachers is another fundamental issue deteriorating the education system. It is reported that 95% of the primary schools are running with one or two teachers who are insufficient to control a school of five classes with a strength of over two hundred. Consequently, classes are merged just to pass the schooling hours. Besides this, no head teacher is available to supervise teachers in primary schools as a result teachers prefer doing other business and getting their salaries on time. However, Primary schools’ teachers are untrained even where the presence of effective teachers is essential as they are the basic builders of students.
Shortage of subjectwise teacher is another issue the schools of Balochistan face.The shortage of teachers in particular subjects contribute to poor learning outcomes. Students often lose interest in studies because of the unavailability of particular teachers for their favorite subjects.
My friend, Rizwan Ahmed, who had a knack for physics dropped out of the school. He says a lack of teachers compelled him to quit his education. “I stopped going to school just becuase we got no teachers to teach.” He laments
However, the aformentioned problems are the causes which have left Balochistan in sheer education crisis.These are the reasons why the province has a literacy rate of 35%. According to reports, 81% of the women remain to complete primary school, compared to 52%of men. 75% of women have never attended schools, compared to 40% of men.
Many families find no point sending their children to schools. Students often complain of teachers not showing their quality. When I found Sammi, one of my primary school classmates who quit education, I was awe-struck as to why an active student quit her education?
When I inquired, she expressed her vow about the quality of education. She expressed, “I could not find any point of covering two kilometers and going to school as we could hardly get any teacher to teach.” She complains, “Therefore, I consider it better to sit at home and do embroidery to help add the family income than going to the school.”
There are thousands of other talented students like Sammi who leave going to schools because of poor education. On the other hand, the large gaps between the schools and homes functions as additional reason to quiting it all over.
Finally, it is high time for the Federal and provincial governments to cater to the problems relating the education sector in Balochistan by equipping and facilitating the schools. The federal government must allocate funds for covering the infrastructure instabilities and ensure the presence of library and laboratory in every high school. In this regard, government can take help from Non-governmental organizations who are working for education.
Most importantly, every district and tehsil ought to have a monitoring team to supervise the smooth running of schools. If not, then it is not too late for the nation to perish since a nation without education is inclined to fail.