Home Articles The bewildering dilemma between lathis and salutes 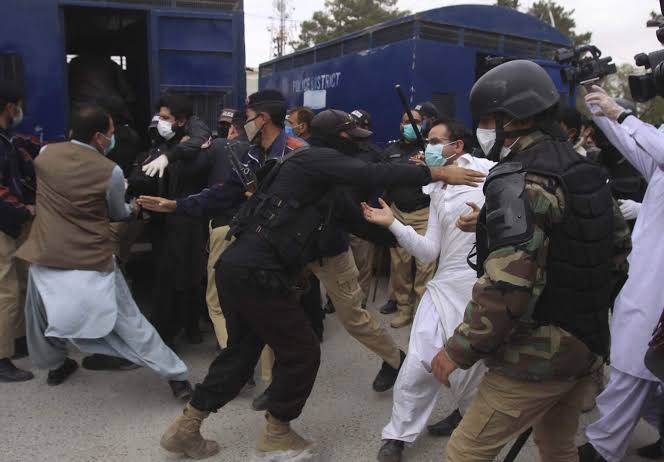 Share on Facebook
Tweet on Twitter
Social media had unleashed a sea of rebukeful and outrageous remarks on behalf of its users stemming from the tragic incident wherein “dozens” of young doctors were beaten, tortured, baton-charged and incarcerated in prisons by the police in Quetta on Monday (April 6) while they were protesting against the unavailability of personal protective equipment (PPEs).
Entire world is conducting guard of honour and appreciating the services of medical staff but on the contrary, the doctors of our country are being honoured and appreciated by the police in the form of torture, baton-charge and humiliation which is truly embarrassing and disgusting. It must be firmly denounced with the strongest words in all level.
Torturing, arresting and imprisoning doctors are tantamount to dispiriting the spirit of doctors and lowering their morale in this biological war. Doctors are the messiah of the patients in these difficult times and are rendering a pivotal contribution in the country’s collective fight against the novel coronavirus. Ergo, shameful acts of striking the doctors with batons and pushing them behind the bars are not tolerated at any cost.
The bewildering dilemma between lathis and salutes triggered by the Balochistan government is ambiguous, despicable and perplexing. On the one hand, the government regards the doctors as the frontline soldiers in the public health battle by saluting them and on the other hand, it beats them brutally with batons when they demand medical equipments for their safety. It depicts the sheer incompetency and utter failure of the present government.
The incumbent government is resorting to violence instead of fulfilling their genuine demands. The government needs to be admonished that the safety of doctors is indispensable in tackling the spiralling tide of pandemic. If all doctors start contracting the virus, God forbid the nation would undergo a mammoth havoc. The government must mend its ways before situation gets worse.
The provincial tally of coronavirus cases is alarmingly ascending at an unprecedented pace owing to which, healthcare professionals are developing mounting pressure during the treatment while the dearth of personal protective equipment have intensified their sufferings manifold and stirred up a state of terror and trepidation among them.
Despite the fact that, China had donated an 35 tons of emergency relief supplies to help Pakistan combat COVID-19 pandemic. According to the details, twenty containers including testing kits, N-95 masks and gloves  reached Islamabad via special flight, PK-8552. But these all medical equipments were distributed among Punjab, Sindh and KPK except Balochistan.
The province’s sense of deprivation and hopelessness tends to continue even in the times of pandemic which flagrantly unveils the colonial mindset of the state. Health-related workers of Balochistan are treating the coronavirus patients without any protective gear and putting their life at risk which is a grave matter of concern.
The ill-equipped doctors, paramedics, nurses other workers are coping with this deadly malady dreadfully in these trying times. They are left at the mercy of God’s succour. May the divine clemency hover over them till this pestilence is eradicated thoroughly and victoriously.
Time is ripe the central government should shun its discriminatory behaviour with Balochistan province while the provincial government needs to throw its weight behind the doctors in these testing times who are withstanding the vicious onslaught of this monstrous malaise for the sake of corona-affected humanity.
Facebook Comments