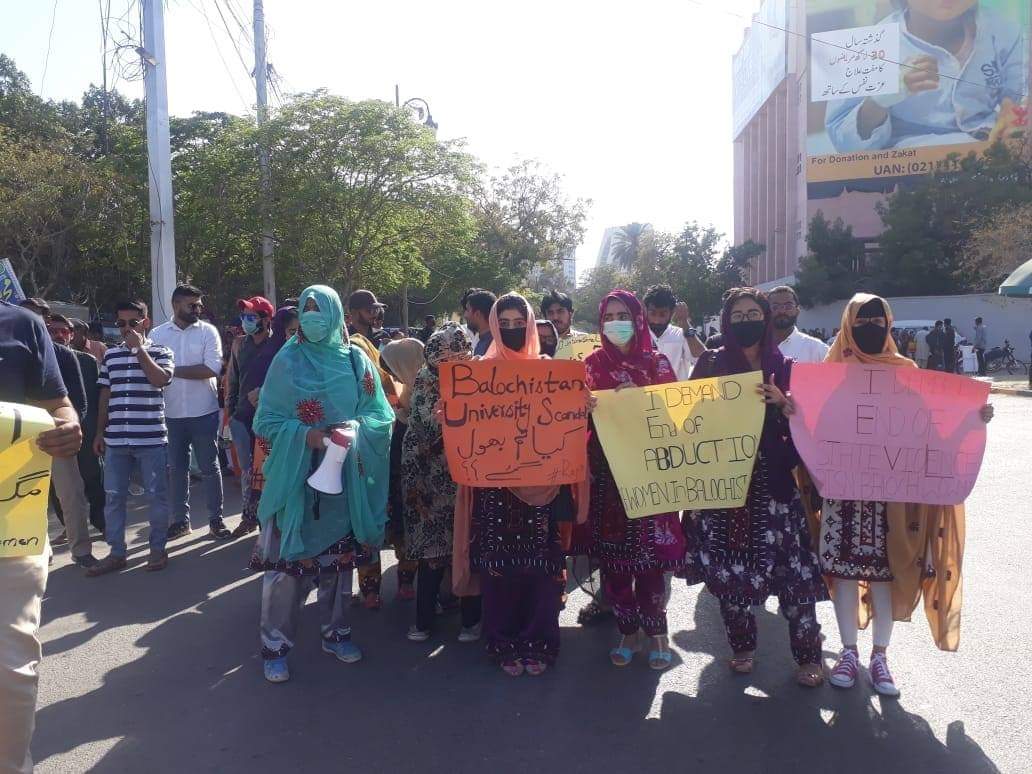 First of all, we are thankful to all Baloch Women Raaji’s Dewan’s “Aurat March” and “Homebased Women Workers Federation HBWWF” platforms for providing an opportunity to discuss Baloch women’s issues. As women, we aren’t convinced that the issue of forced exploitation of women is first of capitalism and then of a totalitarian system, which is at the root of this same capitalism. These social, economic, cultural and political aspects of women make a difference.
Similarly, where the Baloch women are standing? Baloch society is still largely semi-capitalist and tribal, where people in this 21century are still deprived of from all basic neccessities, facilities such as education, employment and treatment, which is certainly the most victimized, but children and women have been suffering more. Maternal mortality rates are higher in third world countries, but in Balochistan, their prevalence is shamefully high.7.8 Percent women lose their lives while giving birth to a new life. Similarly, Balochistan has the highest rates of malnutrition in the country, despite being a resource-rich province. Our women are less prone to social, but more prone to state repression. These days, not only men but women are also picked up and disappeared from the houses, they are subjected to torture. Sexual harassment, rap and even beating, which is the worst form of violence.
In Balochistan, protecting the rights of workers, farmers, fishermen and people sitting in their homes is a long way away, here are women who have plenty to sit in. Our labour are not yet recognized as labor or they have no market for Balochistan and beyond. Until now, as a laborer, farmers do not have such a platform where they can keep their struggle together. The rest of the provinces have the freedom to work more forcefully on labor sharing and unionization, and there is a dire need to work in Balochistan.

We demand that, as a Pakistani citizen, we should be given all the civic rights that belong to everyone else in the state.

Education is our biggest problem; educational institutions should be restored in every area of ​​Baloch and Balochistan.

Basic education which is compulsory and free up to Matriculation as per Constitution Article A-25 of Pakistan, the State should fully implement this Article.

Privatization of all educational institutions should be stopped.

A woman can do her part to achieve a healthy society when she has all the health facilities available. We demand that basic and reproductive health institutions be established in every area of ​​Balochistan.

Incorporate accurate reproductive scientific scientific information into the curriculum, especially for health workers.
midwives should be fully trained to reduce maternal mortality. Because there are no doctors and hospitals available in the inner areas.

A regular awareness program should be started to reduce malnutrition.

The provincial government should pave the way for the development of agriculture and agricultural policy should be taken along with the farmers, so as to increase the production of food commodities and minimize shortages.

The state should accept responsibility for fulfilling the employment.

Employment opportunities for women should be provided in every sector so that they can become economically independent.

Provincial government should provide loans for women working at home, their work should be introduced at the domestic and foreign level so that market sources can be opened for them.

Provide safe social and political spaces for women so that they can communicate with each other easily.

As in the past, students and teachers of Balochistan University were subjected to sexual harassment and till now these culprits have not been identified and this serious issue has been suppressed. Committees should be formed at all universities, colleges and workplaces against sexual harassment. Representation of women and students organization in committees should be made mandatory. Implementation of the Harassment Act 2010.

Forced disappearances, violence and illegal factors should be stopped.