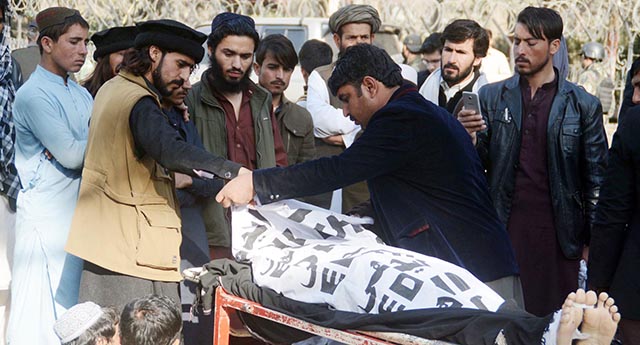 QUETTA: Family staged a protest demonstration against the brutal murder of Sharbat Khan who was killed by Police at Mian Gundi area in Quetta on Friday night. Chief Minister Balochistan Iam Kamal Khan took the notice of incident and order to IG Balochistan for inquiry of the murder incident.

Shalkot Police has tried to stop a vehicle near Mian Gundi area on late Friday night, as the driver didn’t stop the car the police officials opened straight fired at vehicle. In Police firing one person identified as Sharbat Khan son of Mehmood Khan died at the spot where his brother Noora Khan got injured in Police firing. Police has arrested the injured and registered an FIR against him. Later injured and deceased was moved to hospital. The body of Sharbat Khan handed over to Victim’s family after postmortem.

On this occasion, Nawab Salman Khilji told that” Sharbat Khan and Noora Khan was resident of Kuchlak and both were jobless. Both brothers were brought diesel and petrol from Mastung and selling in Quetta, he said.

He alleged that few days back Police demanded 50 thousand rupees bribe from both but they paid only 5000 to Police. On Friday night Shalkot police at western bypass targeted both brothers when they going to Mastung, eh said.

Later, SP Quetta city Abdullah Jan Afridi dialogues with protesters and assured them to provide justice as soon as possible. The protesters end their protest and disperse peacefully.

SP city Abdullah Ian Afridi said that according to the victim’s family statement we will nominate SHO and police officials in case and will interrogate with them.

DIG Abdul Razzaq Cheema said that according to Apex Court decision two cases couldn’t register of one incident. We have made the Victim’s family statement apart of case and started investigation, he added.

Chief Minister Balochistan Jam Kamal Khan also took the notice of this incident, said Abdul Razzaq Cheema, adding that CM issue directive to IG Balochistan for inquiry. A committee would be formed for the investigation and we have recommended the name of SP Investigation Quaidabad’ for investigation, he said.