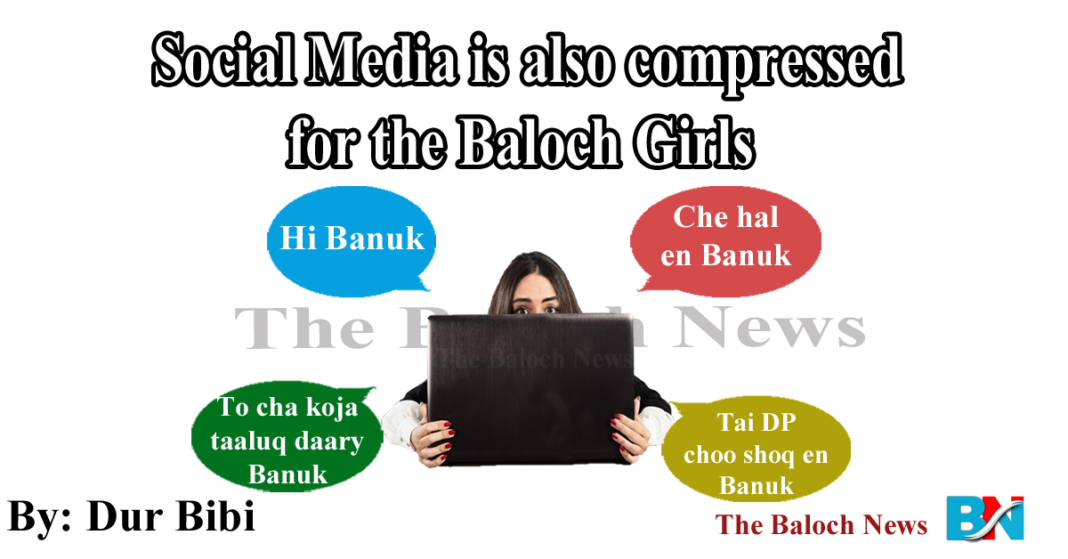 We talk about social changes on the everyday basis because life isn’t on constant mode. In society, women are the pioneers of nations. Women comprise half of the world’s population. According to a report of secretary general of United Nations (UN), women constitute 50% of human resources, the greatest human resource next to man only, having great potentiality.
Women are the key to sustainable development and quality of life in the family and society. Women can lead a family and a society together at the same time. In fact, it is famous that in Baloch society, a woman has equal rights and social status as compared to men, because the Baloch culture gives great importance to the Baloch women.
Hanif  Dilmurad, a Baloch journalist, writer, activist and a researcher, writes about the history of Chakar-e-Azam’s period where his sister Baanri commanded a battalion towards India and had participated in the battle of Pani Path.
In the mid of 17th century, Mai Chaagli ruled Lasbela, she belonged to the Burfath tribe of Baloch. Mai Chaagli was a brave woman. She ruled Lasbela for decades and didn’t pay any taxes to the Khan of Kalat. As a result, the Khan of Kalat supported the Jam of Thatta, a district of Sindh, to attack the Mai Chaagli’s Lasbela state and push her army towards the Kirthar mountain range.
After the Mai Chaagli’s defeat, Jam started his rule on Lasbela. Mai Chaagli sent her messenger toward Lasbela and challenged them about her return and termed it as her liability. Jam ruled on Lasbela with the support of Kalat, but still, he was scared of Mai Chaagli.

This is the power and respect of woman in the Baloch society, but the question arises that is it same condition today? Does that respect and authorities of the woman in the Baloch society still exist?
Me-Too campaign was based on harassment which was highlighted in West, India, and Pakistan. What harassment is? How it effect girl psychologically? Harassment is the behavior that appears to be disturbing, upsetting or threatening.
Do the Baloch girls facing harassment? Yes, of course, the Baloch girls face harassment on the daily basis. They face harassment in personal life, offices, and educational institutions or on streets. Harassment has become their daily routine now, but the worst thing is that the Baloch girls are also compressed on social media.
The Baloch girls receive messages via messenger. The messages are  like “ Hi Banuk,” “Che hal en, Banuk,” “Tai DP choo shoq en, Banuk,” “To cha koja taaluq daary, Banuk.” Such messages also become life’s part of the routine.

But Baloch girls neither can put her own Display picture nor they can share any sort of her own picture just because she is afraid that the people from her own nation will use the picture for video editing. Yes , many people from our society uses girls photos for video editing or any poetry. Just only because the girl is social or if she’s not social then she has shared her pic in social media where she has many friends in list.
Anita Baloch is a Vlogger from Gwadar and doing incredible vloging, she is now a face in social media , but her pics and screenshot of her photos are viral in social media , not like the pictures are for her Vlogs but the people have edited loads of videos and poetries on her pics. If any Anita from any other society was doing the same then I am pretty sure that no one would even use her pics except watching her Vlogs and videos and sharing them exactly the same. This is not the first case, I Dur Bibi faced the same.
I am not such social in social media but yes I am a social activist and affiliated with a literary forum.
In 2014 , I along with my friends were invited by United States Consulate’s political officer, Wren Ehlai, for a discussion on role of Baloch women in the society. It was a great discussion and we spent a great time. Wren asked for a picture and the picture was shared in official US Consulate page.
Few days back my friend sent a video, edited by picture of ours with a speech of any Molvi reciting Quran phrases of Surah Nisa, but our picture? This was too much shocking.
Who did this? The first question in our mind appeared. Why someone did this? If we’ve no problem that our faces are revealed in social media then that doesn’t mean that we want to be viral or anybody make fun of us, or anyone uses our pictures for video editing without our concent. That is true that social media has no privacy but the people of society should have some ethics.
Why she just can’t use social sites like others do. Is being a Baloch girl is the restraining factor? She can’t put a Display Picture because people from her own society will take that picture and use them, and when we ask why the picture of Baloch girls are viral, then people say, “why did you put your own display picture?”
Think , it’s today us, tomorrow can be anyone, why this shit all the day ? Why we girls are restricted for anything? Why we just can’t be like other normal people are? When this mentality will change? Girls also have right to life like the boys. Why girls are so compressed? Why the Baloch girls are so compressed at every place? Why we just can’t live our own life as we want to? Why such cheap mind-set still exist?  When we will be mature?

These are some questions of mine which do not need any answer but need to be raised.