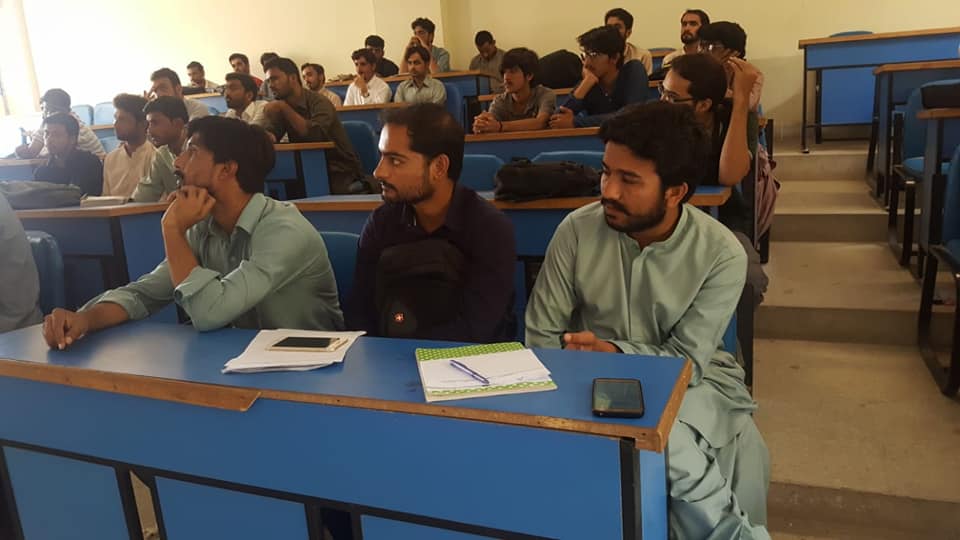 Before the lecture, new batch of the M.Phil and PhD students were welcomed and were presented books as the welcome gesture. Books were also distributed by the guest speaker Syed Hassan Ali in presence of the Organizer BSAC-KU Fareed Baloch. The Deputy Organizer Balach Baloch hosted the Study Circle.

Syed Hassan Ali, in the introduction of the topic, said that there is a great misconception regarding Marxism. Some people say that those who believe in Marxism are irreligious and some others connect it with communism or socialism. “In this lecture, I’ll try to define and introduce Marxism along with a critical analysis over it, said the lecturer.” 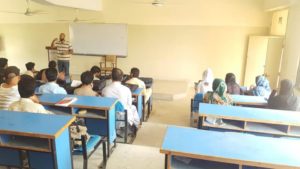 Syed Hassan said that Marxism is the philosophy of History. In order to understand this philosophy, we should differentiate between two things; the first one is the Marxist Theory and the second one is the Marxist Policy, also called as Marxist Model which is an economic model that are obviously very connected to each other, but they still differ.

He further added that in philosophy, we differentiate between facts and values. Facts tell that how is the world and the Values tell that how should be the world. Policy of Model suggests that the society should be formed in a way where social members get justice; it means that how resources should be distributed among the members of the society.

But the fact is that Marx was not interested in policy making, but being an activist and intellectual, he made this policy of resource distribution in a society as a part of his emotional and intellectual perspective of life. In fact, the real concern of Marx was on the Marxist theory; an understanding of history.

Marx had a thought that if you analyze the history, then you find that History is bound around some laws. The development in the History is not random, but is followed of some laws. Marx claims that if you want to understand these laws of History, if you want to understand that what was the bases of evolution in the History, then you can predict the future. 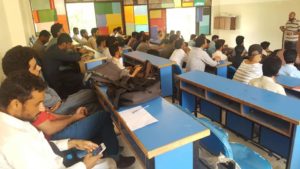 By all this, Marx has some claims (are necessary to accept them for being a Marxist theorist.) The first claim of Marx is economics. When you want to understand the sociological phenomena of a society, you need to understand the economy or the economic structure of that society. 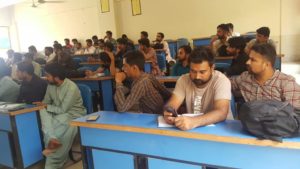 If you are a Marxist theorist, then you can claim that the economic forces only decide the direction of any society, and if you want to understand any perspective of society, then you have to understand these economic and social structures initially.

“Do you people agree that economics is the only force to understand the issues of any society or there are any other ideologies too?” Asked Syed Hassan to the audience. Though economics is effective to see, understand and analyze the social issues, but claiming that it is the only source of identification of the social issues is not admit able. Because if you want to understand that religious extremism, then you have to understand its ideology as well, you have to analyze the philosophical discourses and political system too.

“Marx only focuses on economics which is wrong and very dangerous too, why dangerous, will be discussed later. I disagree at this point with Marx, said the lecturer.”

The second claim of Marx is classism. It means to understand the sociological phenomena of any society, then you have to understand the class system of that society. Like in feudal system, peasant was a class. Capitalist system also has a class system. One of their classes which own the means of production that is the cabalist class and another is that class which doesn’t own the means of production is called proletariat class.

The capitalist class made all those institutions, like police, judiciary, and academia to protect their interests, to befool the proletariat that Marxism doesn’t give them benefit. If you are a Marxist, then you do think so.

Can we say that religious extremism is the product of the proletariat class only, not it cannot, because capitalist class is also involved in it. These are causes where we say that Marxist theory has become very limited in today’s world. But there are some Marxist theorists who say that there is need of changes in Marxist approach.

Marx says that death of capitalism exists within it. He thinks that the working class in the capitalist system will begin resistance against it. He doesn’t say that this resistance is suggested, he claims that it is inevitable, this is necessary. He thinks that it is the law of history, and workers will be in a worst miserable condition. 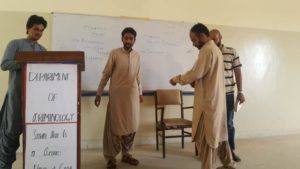 Workers will be in worst economic distress; law of decreasing profits. Profit margins of the cabalists will decrease; law of the centralization of wealth. Capital will be with the lesser people. In this way, proletariat will resist against the capitalist class and will destroy them at last which is considered as considered as a stage.

Then comes the next stage, that is called Socialism; it is also called as dictatorship of the proletariat. In this system, the government will take all decisions. But Marx claims that there will be a third stage which is called as Communism. In the stage of communism, there will be no state.

“This is overall the ideal theory of Marx regarding the sociological phenomena. The questions asked above are not yet answered in real world. At many instances, it is felt that many portion of Marxism cannot answer question of today’s world. Therefore we say that Marxism is an effective tool to understand, indentify and analyze the sociological phenomena, but it is not the only one.” Syed Hassan Ali concluded his lecture with these words and opened the forum for the question-answer session.