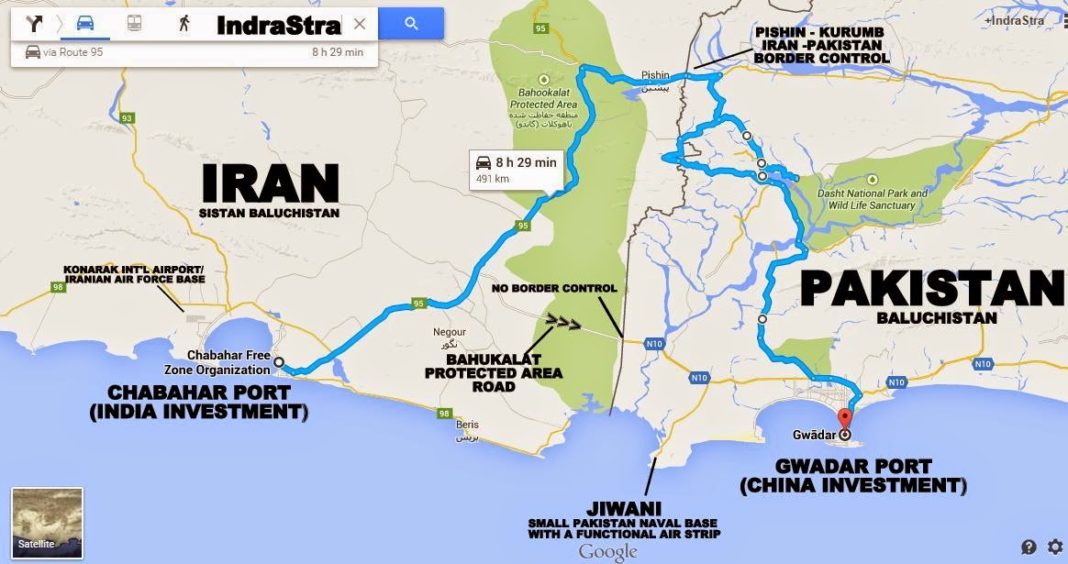 New Delhi has systematically cultivated its strategic and economic relations with Tehran since the beginning of the twenty first century. India and Iran signed a defence pact in November 2003 and revised it in 2009. Neither United States nor other Western countries solicit India to honour United Nations Security Council directives or sanctions levied against Iran. New Delhi and Kabul signed strategic partnership with the connivance of United States in 2011. Since than, Afghanistan and Pakistan bilateral relations have been deteriorating.

Strategically, Chabahar port is very significant. It is located in the Sistan-Balochistan province near Strait of Hormuz and Pakistan’s Gwadar port in Balochistan. The Indians consider it as a gateway to Afghanistan and Central Asia. In May 2016, Prime Minister Narendra Modi announced that India would invest $500m to develop and operate strategically important Iran’s Chabahar port. New Delhi promised to invest in the Iranian railway for laying railway lines connecting Iran, Afghanistan and Central Asia. Indeed, the new trade route would assist India to get a foothold in the region.

The transformation in Global Politics and cementing strategic partnership between India and United States has not obstructed the former relations with Iran. On August 6, 2017, the Indian Union minister for transport, highways and shipping, Nitin Gadkari announced that Chabahar port would be operationalised by 2018. He stated: “Civil construction work has started there. We have finalised tenders worth Rs3.8 billion for equipment out of Rs 6bn and once the port becomes operational it will become a growth engine.”

India built 220-kilometre road in the Nimroz province of Afghanistan and now planning to extend this road to Chabahar. Interestingly, the Indian ruling elite is giving an impression that it would be able to develop the port within stipulated time. Whereas; Western manufacturers are shying away from supplying equipment for Chabahar port. They are afraid of the probability that United States may reimpose sanctions on Iran.

The Trump Administration has already expressed its concerns over the Iranian nuclear program. It gave an impression that it could quash the 2015 Joint Comprehensive Plan of Action known commonly as the Iran deal or Iran nuclear deal.

President Trump declared 2015 Joint Comprehensive Plan of Action “the worst deal ever negotiated”. It was reported in Foreign Policy (July 2017), “the president has assembled a special team of White House aides whose sole task is to figure out a way to claim that Iran is violating the deal.” The termination of the deal would automatically reimpose sanctions against Iran. The Iranians have confidence in the continuity of the Indian investment in Chabahar because even before the nuclear deal was reached, India was doing billions dollars trade with Iran. Ironically, Washington did not compel New Delhi to oblige the United Nations Security Council sanction imposed against Iran. However, Washington indirectly hindered the construction of Iran-Pakistan gas pipeline.

The trends in the regional politics underscore that the deepening relations among India, Afghanistan and Iran are not in the interest of Pakistan. Admittedly, it’s difficult for Islamabad to normalize its bilateral relations with India. Nevertheless, Islamabad could engage positively Kabul and further improve its bilateral relations with Tehran. Hence, Islamabad revisits its trade policy with neighbouring countries. For instance, Iran is a big market for Pakistani agriculture products. Pakistani traders could benefit from the Iranian market by supplying rice, wheat, citrus, sugar, soybean, etc.

Islamabad needs to engage Iran constructively to defy India’s isolating strategy. The encouraging factor is that many people in both Iran and Pakistan have been stressing that the Gwadar and Chabahar ports should not be seen as rivals. The government of Pakistan is exploring the opportunities to developing links between Chabahar and Gwadar.

On August 7, 2017, during a meeting with President Hassan Rouhani in Tehran, Senate Chairman Raza Rabbani reiterated that Iran and Pakistan were strategically important to one another. He stated: “Pakistan will spare no effort to promote relations with Iran.” The leadership rhetorical support for improving bilateral relations needs practical initiative(s) for sustainable cordial bilateral relations between the neighbouring states.

To conclude, constructing a new transit route through Chabahar port is an attempt by India to bypass Pakistan and also undermine China-Pakistan Economic Corridor. Therefore, Islamabad needs to initiate a productive and result-oriented negotiation process for enhancing its economic, political and diplomatic relations with Tehran.

The piece originally Published in pakobserver