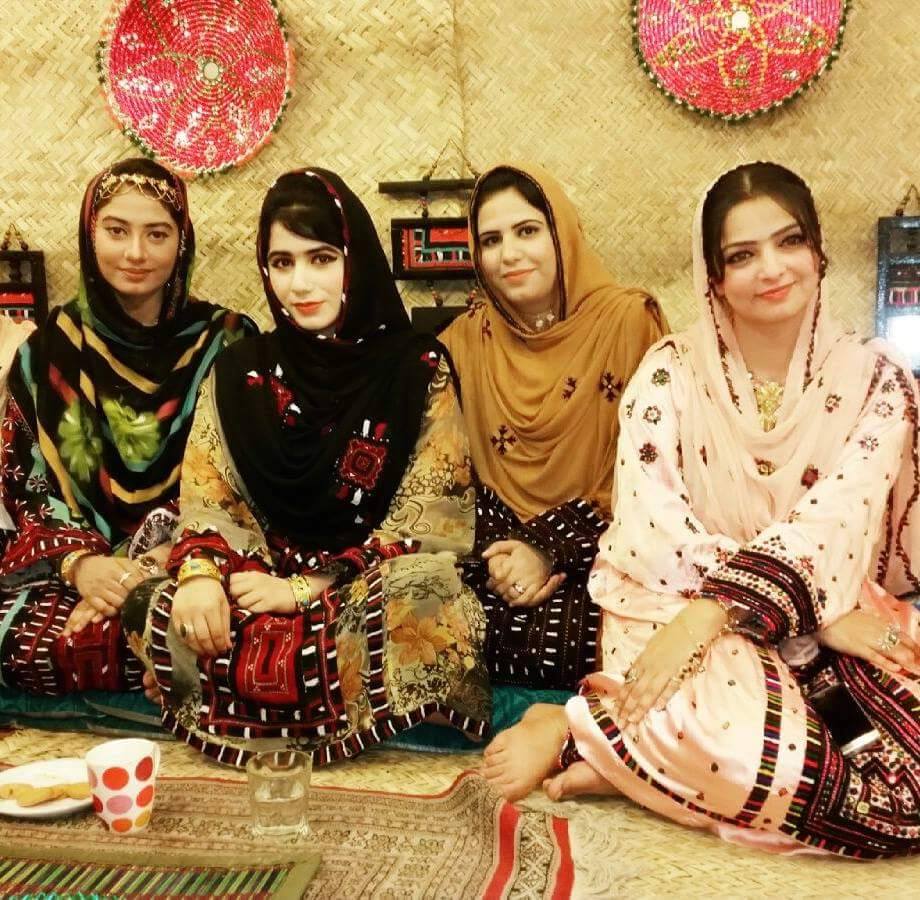 Baloch, being rich enough in terms of cultural beauty, has got a magnificent and different clothing style, which contrasts the Baloch from rest of the people of the world. Balochi traditional clothing gives a sense of proud to the wearer (Baloch). Anyhow, let’s have a glance over Baloch clothing that how it is different and more attractive from rest of the traditional clothing of the people across the world.

The women wear a straight and loose costume, extending to mid-calf. The simple round neckline is slit at the front of the bodice of the dress. Sleeves are long and loose and slightly tapered at the wrist. This robe is worn over loose-fitting trousers of a same or matching color; the trousers are gathered at the waist and tapered at the ankles.

Probably, the most striking feature of the women’s costume is the hand embroidery, covering the front of the dress and the cuffs of the sleeves and trousers. These embroidered pieces of the dress usually include a fully embroidered bodice (jig/zi). The piece for the front of the bodice is square and extends across the entire front from shoulders to waist. Another rectangular piece (Pandol/ koptan) extends from the waist to the hem of the dress and comes to a point at the top; the sides of this piece are left unstitched so that it can function as a large pocket. This pocket is the major ethnic marker of Baloch women’s dress. The cuffs of the sleeves and the trousers are also beautifully embroidered.

Another major and traditional sign of a Baloch woman is of course the large scarf (sareg, shar, gushan), usually a colorful embroidered scarf which beatifies the clothing of Baloch women. Traditionally, strict veiling is not common among Baloch, but Baloch women feel proud to draw the corners of their scarves across their faces.

No doubt, most Baloch women today wear bright plastic and other kind of sandals, but the traditional shoes that Baloch women used to wear, before modern sandals became available, were known as chakani, which were beautifully embroidered; and in rural areas Baloch women still wear the shoes made of date or dwarf palm leaves.

The Baloch woman’s everyday garb is not completed without jewelry which usually serves as an indicator of a cultural and traditional beauty of Baloch women. Most characteristic and impressive jewelries of Baloch women are earrings, which typically consist of twelve or fourteen small rings inserted along the rim of each ear from the top of the ear to the bottom of the lobe. The weight of these rings causes the upper flap of the ear to fall forward, which is considered a sign of beauty.

Commonly, a female baby’s ears are usually pierced for such a series of small earrings shortly after birth. After marriage a woman may add huge earrings made of thick pieces of gold (durr), which are gifts from her husband’s family. In addition, nose rings (bul) and nose pins (pulli) are very popular, as are heavy necklaces and bracelets (daste kangar). Traditionally, all females braid their long hair and tie the bottom of each braid with a single multicolored tassel (sagi) made of many small glass beads and yarn pompons.

Although Baloch men clothes are less colorful than that of women, men’s clothing is still characterized by special features that immediately identify the wearer as Baloch. The traditional costumes worn by Baloch men are usually of white, creamy, or khaki cotton, but historically only a white shirt and pajamas were worn, with which the colorful embroidered vest makes a striking contrast. The trousers are extremely wide, hanging in folds between the legs. They are drawn in to a waistband and are tapered at the ankles. The loose shirt reaches to the knees or even lower and worn over the trouser.

The older style of the shirt (pashk) has a round neckline with a buttoned opening on one shoulder. The more modern neckline has a collar and a buttoned opening down the front to the waist. Men, in colder regions, used to wear fully embroidered jackets over this basic costume. Moreover, the headgear of men consists of a piece of cloth wrapped as a turban, or a cap in some of the regions of Balochistan. The traditional caps are mostly embroidered and a number of small glittering pieces of mirror are incorporated into the intricate designs. Boys and young men wear only these caps in some regions whereas older men add huge white turbans (pag), each of light cotton cloth, many meters long. The specific method of wrapping these turbans further serves to distinguish some regions’ people from another, as in Makuran black colored, red at the corner, shawl is worn as headgear rather than white.

Also, perhaps the best-known type of Baloch footwear is the heavy sandals produced by men in hundreds of small shops throughout Balochistan; the tops are of heavy leather and the soles cut from old automobile tires, which are excellent for walking on rough desert or mountain and are comfortable in town as well. In the hot areas the traditional footwear made from palm fronds, which is known as Bazbani, can still be seen though it is no longer worn in the cities in particular.