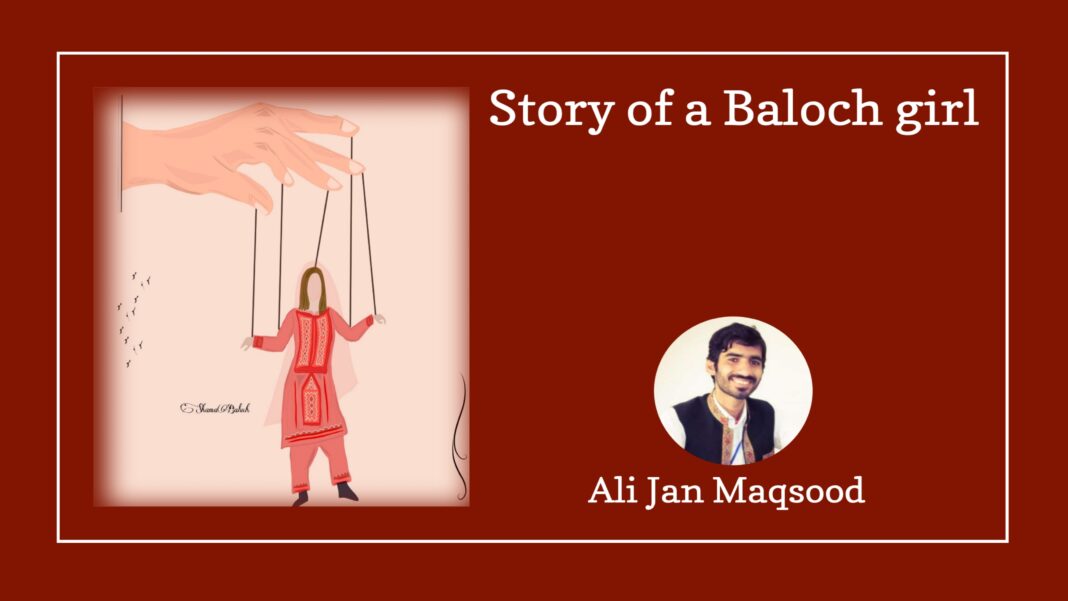 Early in the morning wakes up an ordinary Baloch girl Nayab with a smile on her face. She opens the window of her hostel room and feels the cool breeze of morning. She sits there for sometime and wonders about the outlooks she witnesses at that very moment. And suddenly, she goes deep into her past and a drop of tear falls down from her eyes. She smiles tearfully.

Being a member of the Baloch society, I can feel how girls are given least attention by a many families_ be it any sphere of life other than marriages. They are considered as burdens for many other families; contemporarily, a boy as an asset. There is celebration with the birth of a baby boy and mourning if the born baby is a girl. When we learn that women and men are the “two eyes of a beautiful bride”, we may witness prosperity in the region and end to the culture of inequality.

“From the very beginning of my consciousness, I got the least attention from my family which resulted in severe hardships for me during my growth,” says Nayab in tears. “My all days of innocence went only in thinking what my sin was getting no one to be with in my family.”

She feels she has been a burden for her family and a “machine” to only work for them bearing their torture of negligence. Sometimes when she wished to talk to her father, he never had time for that. Was all this torture applied solely because of her being a daughter?

“When I joined the High school, I got some friends who made me feel like a family,” says Nayab with a little spark in her eyes. “But, they too only used me in the name of friendship. Everyone, since then, has been coming in my life solely to lift me down. I eventually could not believe anymore in any relation_ not any at all. Life was killing me each second thereafter.”

When we get nothing from our family, we search for a similar connection outside our family. As students we try to look for alike love in our friends, but when they [friends] too disappoint us by deceiving, who else to go for sharing what has been inside us for long? She was under harsh dilemma of who to share what inhabits in her as her family had already been ignoring her, her society had functioned to crucify her potentials and her friends came in her life to use her!

“And suddenly someone proposed me and promised to marry when I was only 14. Because I was very small and lacked love in my life, his words attracted me towards him. And I accepted his proposal.” Nayab tells closing both her eyes. “But after around some months, he said he could no longer stay with me. When I asked him the reason, he said I was only his “time-pass”, nothing else.” tears kept trickling down from the innocent, closed eyes.

“It is very tough when the finger is pointed right at you. If you cannot see your own sister to be the time-pass of other boys, why would you do the same with other girls?” Nayab asks the Baloch community.

She was at a stage in her life that neither she could commit suicide nor could she ignore what was happening with her at home. Thankfully, she bore all this and had a smile on her lips all the time. She sometimes went to offer prayers only to complain to Allah about what His ‘favorite creature’ was doing with her in life and asked God for a miracle to happen, which till date has not happened.

“Time kept playing with me and my emotions. I kept wearing a fake smile and everyone thought I was happy. They knew nothing of my vociferations for hours every night_ either under the pillow or in the bathroom.” Nayab tells me looking at the alone moon up above the sky.

She says her family and society sometimes doubt on her smile. They think she is doing something which would harm their honor in the society. “Goddddd, why doesn’t your people let me do anything?” she shouts at herself looking at the sky.

A moment later, she pointed at the moon and said, “Bahi, look at the moon. Despite being amidst beautiful and sparkling stars, how alone it is na! We both [I and moon] have the same story. We are two stars of the same sky.”

She looked deep into my eyes and I had no reply to her glance. Her eyes were desprete to getting her questions answered but all I could do was to look down. She smiled and asked me to chill. “You will, I know, write my story but will that do enough?” she asked and left.

Despite she made to the university and was studying the hardest, she still missed the love she should have gotten from her family and friends. She aims to becoming something so as to tell everyone she was not a burden. Not only she, but not any girl is a burden on their parents. Girls and boys share the same rights in many ways. Gender must never hinder. It is not their wish to born as girls, why are they being punished for being girls?