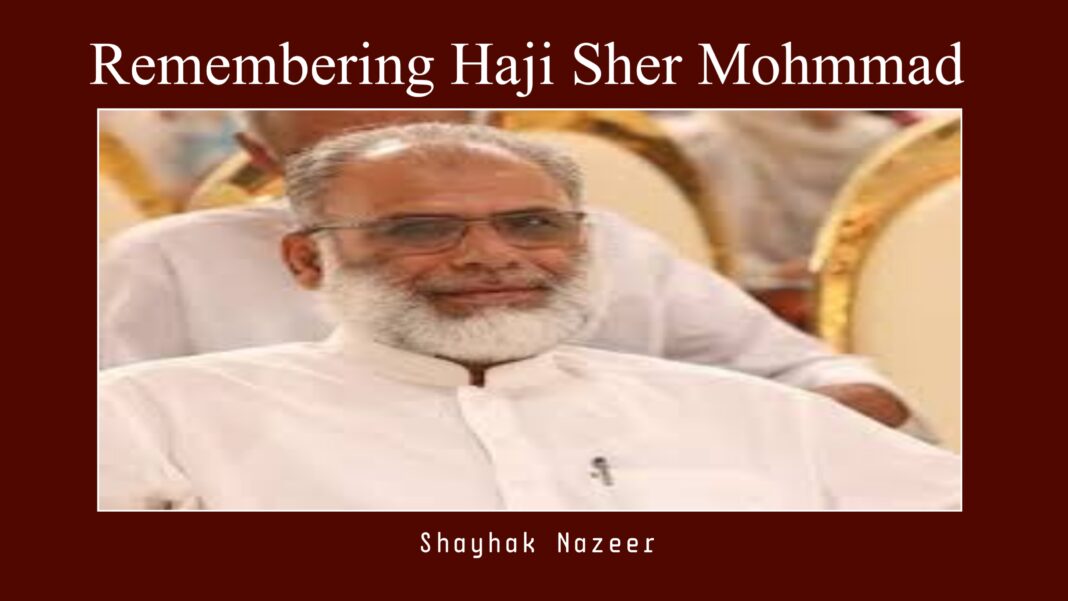 Share on Facebook
Tweet on Twitter
History remembers the people who work for the betterment of their nation and the people who give priority to their language and literature.  Haji Sher Mohmmad is a shining example of it who is no more in this world but his thoughts, contributions to Baloch nation and literature made him alive in the pages of Baloch history.
I am shocked to my core. We have lost one of the best personalities,  we had ever met. I personally have lost my guru, my mentor, and a great human being..I fall short of words to express my grief on the sad demise of our beloved Haji Sher.
Anyhow, Haji Sher Mohmmad 50 years old died in sudden heart attack on 29th June 2019. This legendary man not only contributed for his area rather he always thought for all. He promoted particularly Jusak education system, which was a huge problem for a long. Being one of the active politicians, he brought a lot of developments in Jusak.
Beside that, he was twice president of Anjoman a Tajeran, an organisation of businessmen of district Kech. He solved so many problems of businessmen of District Kech, that they had been facing for long.
On the other hand, this legendary man always stood at the frontline of any protests in Kech, he many times raised the issue of electricity of District kech, which is still an issue for us. Anyhow he was close to all types of people, he did motivate students while they achieved something special.
I can vividly remember when I became Gold medalist fron University of Turbat, and Haji Sher Mohmmad saw me on the way, he stopped and congratulated me for my achievement. Really, I got so happy being motivated by legendary person of Jusak.
Alas, it was Saturday when I heard a friend saying that Haji Sher Mohmmad is no more. I could not believe my ears. The tension was mounting as the factual news hit me like a bullet. The news of his death brought a complete silence in Turbat. The untimely news of his death not only stunned me but several other families, businessmen, farmers, players and people from different walks of life.
I am unable to forget him, I still feel he is in Jusak. His voice is still in my ears, his words are still in my notebooks, his vision is still in my mind and friendly attitude is still in my heart. He may not be visible to me but he can never be out of my heart. I believe his contribution will always be remembered. I wish he could spend many more days with us.
My sincere condolences to the grieved family members. May his soul rest in peace.
Facebook Comments