BSO, as the name suggests, is a leftist nationalist student organization in Balochistan. The literature its members are encouraged to read mostly preach anti-colonialism, anti-imperialism and anti-religious extremism. Although the Baloch student’s organization perceives Pakistan as a model of Islamofascism, it has to walk a thin line when it comes to dealing with the sensitive subject of religion. During the regimes of dictators, students organization were banned for political activities, but despite all odds and state restrictions, BSO continued to strive for the due rights of Balochistan.BSO also educates the masses to dismantle the dehumanizing Collaboration of tribal Sardars.

However, reality though is quite different in recent times. The Constitution of BSO being frequently violated by BSO leaders which in past decades always resulted in Fragmentation of BSO due to acrimonious attributes of leadership thus lust of power always dominated the ideology and it becomes a norm from 2006 to till date. It is the right time to disseminate the truth that unconstitutional moves, practices tenures became a recurring object to be practiced.

The organizational structure of BSO is based on unit, zone, central committee, and central cabinet. Councilors are elected through zonal general bodies that represent their zones. Council session is held every two years where approximately 253 councilors from different areas vote for the central cabinet for two years term. Drastically the unconstitutional Central Cabinet and CC members completed their 5 years by Violating their Constitution on which they took the oath and not willing to call the central council session because they are prevailing dictatorship within the organization. Resultantly, this is an injustice to BSO, members, and the entire Baloch Nation.

The Constitutional of BSO is supreme than any Central Cabinet or their sympathizers who targeted BSO to erode the concept of nationalism and finally wanted to turn it into a tribal hierarchy. But, it is alarming for them that the ideology still persists and they will face the Questions?

Unconstitutional Chairman Nazeer Baloch. Central Cabinet and Central committee members are prolonging their tenure by hook or crook and resulting in defamation of BSO and malign the Constitution of BSO. If an ordinary member Question that they use the tactics of dictators and label the members traitor and suspend their membership.

We, Will, resist such any move by the unconstitutional central cabinet and will defend the nursery of resistance. We are well aware of the prejudice and vengeful mindset of unconstitutional Central Cabinet. We demand from them the central council session if they failed to announce the date of council session, we will conduct it in March and all those who want their empire to Govern our organization will not be part of it. We will strongly oppose any interference of any external party in the matter of BSO. According to the constitution, BSO has its own independent status and not bound to take guidelines from political parties. According to the constitution of BSO, its members at the same time cannot be members of another organization or join jobs during its membership. We know where the footprints of the Central Cabinet and Central Committee mark their existence.

The Need of Hour is the central council session and the resignation of incompetent and unconstitutional Central Cabinet and Central Committee members From BSO because they all are not any more welcome in BSO because of their actions totally against the Constitution.

On the gallows, I speak the truth, I can’t keep silent. ( Mir Gul Khan Nasir ) 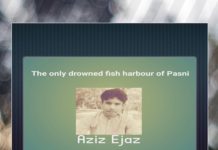