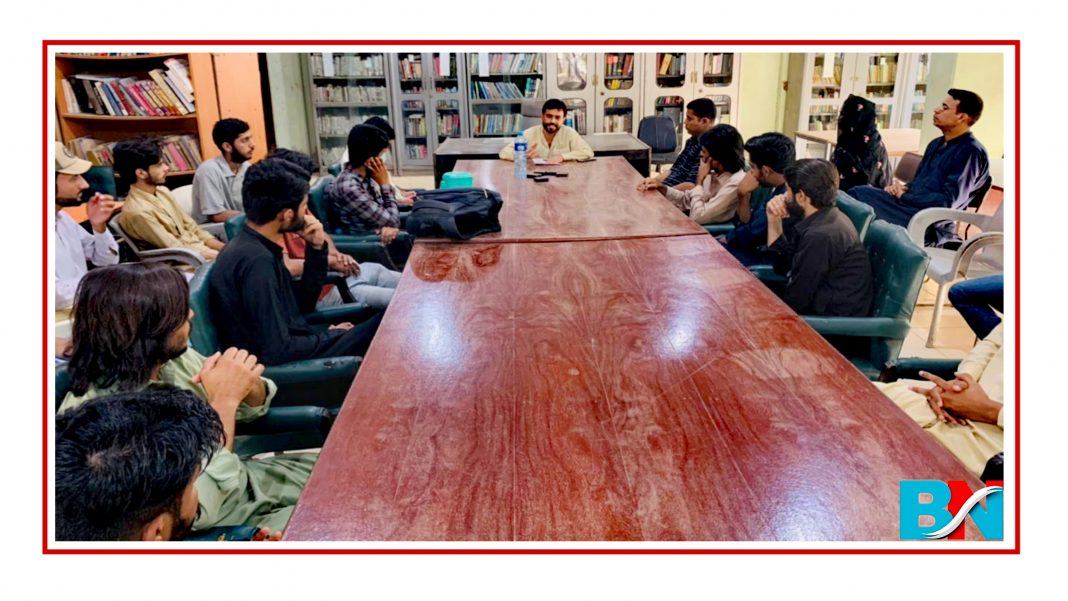 Lyari Literary Forum (LLF) held a study circle program entitled Impacts of Colonization in Third World Countries. The lecture was delivered by Faheem Baloch who is an MPhil Scholar in Computer Science from the University of Karachi.

At the beginning of his lecture, he defined the term Colonization. He explained that “Colonization is the process of establishing control over indigenous people of an area and making them their colony by fully occupying the nation and its territory, for the interest and benefit of colonizers. Even After ages, the colonization process is being established on various indigenous nations by showing their power over them and suppressing the oppressed. The powerful country that occupies the oppressed is called the colonizer and the nation that becomes oppressed is known as colonized. Therefore, this process goes on”.

Then he briefed the audience about another type of Colonialism which is “Exploitation colonialism”. He explained that “it describes the use of force to control another country for purposes of exploiting its population as labor and its natural resources as raw material. In undertaking exploitation colonialism, the colonial power sought only to increase its wealth by using the indigenous people as low-cost labor.” He then gave an example that Exploitation Colonialism is seen among Africans, where African laborers were brought and sold in Mandi.

After that he discussed Another type of Colonialism which is “Plantation Colonialism, He depicted that “in the history of colonialism, a plantation was a form of colonization where settlers would establish a permanent or semi-permanent colonial settlement in a new region”. Colonizer plants their language and culture in the colonized region and exploits their own culture and language of colonized. Nothing remains for colonized but things that the colonizer inserts.

And lastly, he discussed “Internal colonialism” the type of colonialism that is the uneven effects of economic development on a regional basis, otherwise known as “uneven development” as a result of the exploitation of minority groups within a wider society which leads to political and economic inequalities between regions within a state. Thus, everything is possessed by the colonizer.

The lecturer addressed that in all these phases of colonialism the colonizers need some tactics to control the colonized and stop them from resisting. He further added that when the colonizer no matter in what shape and policy enters into another Nation’s territory for an occupying purpose always faces resistance in the initial phases because not any individual is ever agreed to give his/or her land to the colonizer. However, resistance exists today as Russia has attacked Ukraine and Ukraine is resisting. When the colonizers enter land for occupying purposes, it comes with power and military. First of all, it rejects the codes and values, language and literature, culture and traditions of the colonized. Colonizer subjugates the people their land, language, economy, and all social values.

Faheem Baloch said that in the very initial phase, Colonizer becomes successful in injecting its ideas verbally into some natives because of to strengthen the claim of colonization. however, the natives withdrew and accept the ideas of the Colonizer. And thus, after that the Colonizer practices destruction. Colonizer practically goes toward destruction, by destroying the marks of the colonized culture and tradition, language, and literature. if it won’t destruct then Colonizer fears that these things will create a hurdle for them in the future.

So after destroying the social values of colonized these two phases still some natives remain unchanged. now the colonizer starts insulting them by devaluing their culture language, and setup. And some people due to insult withdraw. Even after this phase, the colonizer still feels like something is still unchanged and needs to be changed so then it establishes the process of transformation, like some of the Balochi cultures, has turned into Islam. Colonizer accommodates you that it’s just furnishing some false setup and norms. But to its dismay, it still lets some social codes, unaware that it will create disturbances for the colonizer in upcoming days, but doing so, the colonizer wants to prove that It hasn’t destroyed the colonized values but has civilized it.

Additionally, In these five processes, Colonizer entails its strong unit of Colonization and that is its “Education System”. Speaker then quoted ‘Frantz Fanon’ As Fanon said, “after spending some years in Paris when he goes back to Algeria, he sees the natives as lies from head to toe as they lie not human”.

So In the Colonizer education system, it mobilizes you. it tells you about its heroes, it will talk to you about its heroes and people, and then exploit your language by educating you in Colonizer language, and then it brings its own culture upon you. After the military, the biggest tool of colonizers is its Education System. To destroy a nation, to exploit a nation’s culture, literature, tradition, and language through it uses its greatest machinery which is its Education System. In this Education System, oppressed language, history, cultural heritage, traditions, and literature has no place and value. Thus, in this Education system, Colonized identity and national existence cease.

Eventually, if you do not awaken consciously and just follow this Education System then the colonizer is successful in inserting its Education System into you to stop you from your ground realities and completely colonized you. It installs its setup in you.

However, there are still people who don’t accept the colonization and resist and if they want to be completely decolonized then there are also five processes for that. Faheem Baloch then discussed those five processes.

The first step is “Rediscovery and Recovery, in this phase, Colonized have to go through their history, not the one which the colonizer has given to them, but their history. Such as If we see Baloch’s history then first it’s been written by a foreigner like the British colonizer and the colonizer never traced our real history but sometimes recalling Baloch as Arab, sometimes Aryan, so if the colonized want to decolonize itself then first they have to discover their history. After the recovery of history, the second phase is “Mourning” this is a shocking phase. when the colonized understand that, they have an old and rich civilization and culture, their social codes now don’t exist the colonized mourn but in this mourning phase when the colonized realize that their cultural and social values have been destructed then it enters into 3rd phase that is “dreaming” he understands that colonizer has installed false elements upon them he now dreams that how such elements be removed and their cultural values and social codes be applicable again. Now, a colonized dream that if the colonizer is omitted then everything will be in order, their own culture, own tradition, etc. Now in the 4th phase colonized do a “commitment” that now they to completely take out the colonizer they have to remove the colonizer from their land or else be in the mourning phase for what they have lost due to the colonization. And then the last phase is “Action” in this phase, colonized decide to act for decolonization, he then again quoted Fanon, that the Fanon has said, “the most effective and valid phase of decolonization is Action, in the duration of Action you have to be clear of what kind of action you are taking. In the duration of your action don’t give euphoric dreams to your people that the colonizer has been taken out and work is finished but you have to educate your people that by taking out the colonizer, the system won’t be better, but also take out all the deep-rooted impacts of Colonizer”

Moreover, he gave an example that read in your language, writes and expresses in your language, thinks in your language, practices your own culture, if in your all these setups, If there’s colonizer mark then colonized is not decolonized, so therefore in the action phase, Colonized have to clarify all these things of its literature, history, language, culture and tradition, social values and after the freedom colonized will act according to their es; and to completely emancipate from Colonization impacts, Don’t give false hopes to people that if colonizer is removed colonization is over, Colonized have to remove its impacts too for being completely decolonized.

Moreover, in third world countries, the majority of countries are the neo-colonies of the Colonizer. Although Colonizer has left the land yet their social system has taken deep roots in those countries and its system is still running. Such as, an American Ambassador has asked Mr. Jinnah in 1946, “now Pakistan is about to be free, what kind of a country Pakistan will be? Mr. Jinnah replied,” after freedom, it will be decided.” Meanwhile, in the auction process, the leader himself had no preparations, and therefore still its system is not wholly uplifted. In the decolonizing process, people must be fully educated so that they may know both the merits and demerits and don’t give the people false hopes but prepare them for the upcoming problems. Otherwise, they will be neo-colonized, such as the African nations. They have been free but still part of neo-colonization because their system has not been revived. When the colonizer is fully compelled to leave and ready to withdraw then it leaves its marks so that its system may be imposed on the colonized. It becomes possible only because these countries haven’t decolonized the whole system due to not a proper ‘Action’.

As the First and foremost thing is colonizers hardly leave, but as Fanon has said “To stop the violence you have to do a greater violence so the violent may quit and be frightened”. Also, he said when the colonized reaches the Action phase, that means the colonized is 99 percent in the decolonized phase because he would have never reached this phase if he had a little fear.