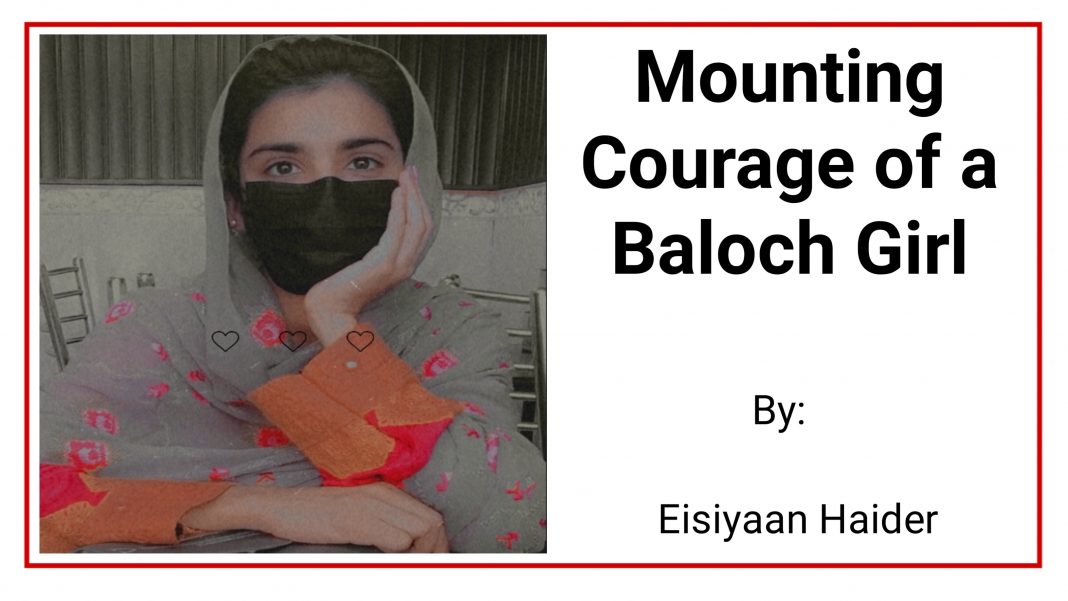 Life is all about hurdles and challenges, specially when you are part of a society where right to self determination is ignored. Sometimes you fail and some times you go through the challenges. But failure does not cease your ways to glory, rather grants new opportunities to get trapped into new beginnings and own lifetime success. Balochistan is one such land where one has to overcome hazardous times to touch lifelong success.

We often think that how rigorous it might be for a Baloch girl to fail. As being a part of the Baloch society which is intentionally converted into conservativeness, Baloch girls come across various restrictions, grievances and numerous hurdles with tough challenges. They usually cause to convert one’s potentialities, motivation, dreams and hopes into scattered and broken desires of progressiveness.

But it cannot stop one to break all the chains of cage and fly fully as a free bird. Failure does not always make one blind to reach lightness but blesses with courage to seek brightness in dark. It generates an energy within the living individuals to challenge any situation of life and get beyond.

Similarly, this is the true story of a Baloch girl who countered thousands of hardships, hoodwinked companies, and opened the blocked paths on her way and did not give up. She fixed her destiny by herself – she is a free bird flying today in the open sky. She is the exemplary girl Sahira – Sahira Wahid of Turbat Kech.

Belonging to Kolwai Bazaar [Turbat], where girls are criticized each time they make an effort to make a name for themselves and their families, she emerged as an example for the other girls of her town. She graduated in matriculation from Government Girls High School, Absor, and Intermediate from Girls Degree College Turbat in Pre-Medical.

She was acknowledged as one of the brightest students in school and college, but fate was not in her purse when she gave her attempts of securing admission in medical ahead. Although she worked tirelessly from dawn to dusk, but could not clear the medical test. Despite the fact that she was fully prepared, but she did not get deserving attention and motivation she needed the most. This left her out of her desired field. Instead of being her backbone in such critical times, the nominal literate people of her society tried to oppress her and made her realize that she was weak.

Arguing not of Baloch society’s moral and financial support as a whole, a lot of families still consider giving least attention and investing little or no finance on women, but men. Unfortunately, Sahira was one such girl.

She rolled down tears, but still stood like a lioness and took the decision for the second attempt. But time deceived her again, burnt her dreams and then granted her the shadow of being in failure. One thing was good this time that she had learned the behavior of the society after this failure. This time she was already prepared for it.

Upon her failure in medical for the second time, she applied for the scholarship of Reserved Seats for Universities of other provinces through Directorate in which she not only passed, but topped in her entire region. But, due to some issues, she could not avail the opportunity at that exact time and requested the Director of Directorate to give her the scholarship some times later, but it was not possible. Her luck was turned down, but how could they stop a bird to fly? Sahira did not fail and gathered courage to move on. Her struggles, no doubt, were bearing fruits for her, she realized. She applied for a Western scholarship and started her preparation.

Time kept passing, people continued demoralizing her and multiple dilemmas began to mount on her way. She was firm on her stance. One day, fatefully, she got the optimal news of being selected in Stipendium Hungaricum Scholarship for her higher education.

Now in recent days, the girl who was criticized, demotivated, told to give up, has reached out to a European country for studies which everyone dreams of. Sahira’s hard-work not only presented the skills of a Baloch girl to the world, but proved that failure never ends the life rather opens up new ways to success.