Home Balochistan One day will come when there remains no girl uneducated in Panjgur:... 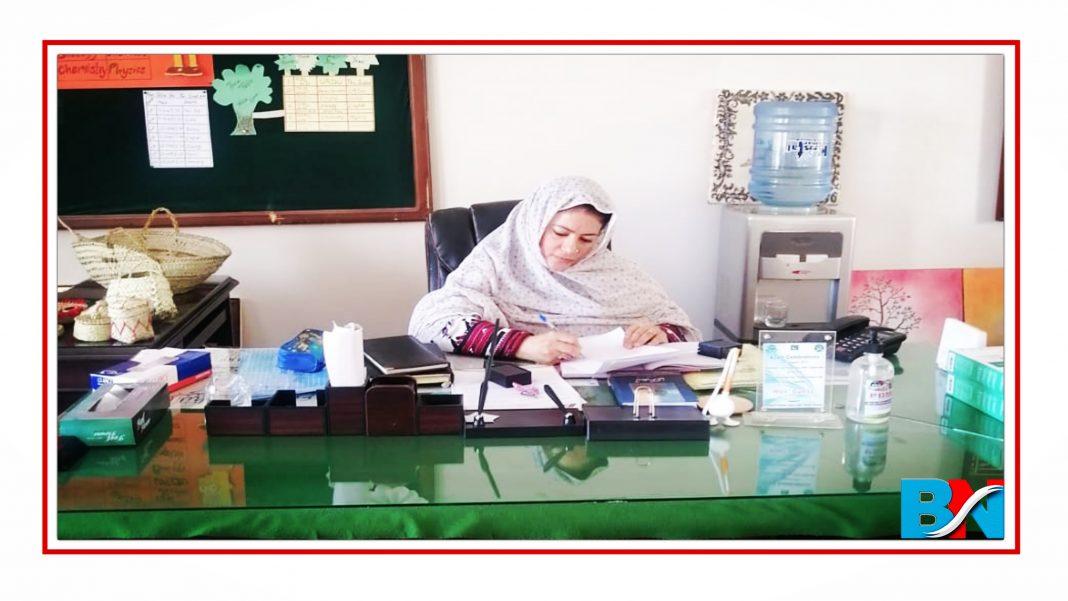 Aziz Ejaz conducted an interview session for The Baloch News with Madam Farzana Hashim. She currently holds the position of Principal in Govt Girls Degree College, Khudabadan, Panjgur. She is a devoted educationist and effective advocacy of girls education in district Panjgur.

TBN, stands for The Baloch News

TBN.  At first Madam, we would like you to introduce yourself, tell us about your educational career and experiences and current position?

FH. Beginning with the name of Allah who is most magnificent and merciful, first of all I would like to share my sincere thankfulness to The Baloch News team for interviewing the unheard voices.

My name is Farzana Hashim, I feel and keep myself one of the great well-wishers, who is hopeful that one day will come there remains no girl uneducated, I have been hoping this since the sense of comprehension came to me.

Starting from educational career, I received my basic education in my home town Panjgur from matriculation to graduation in science. Later on, very happily and successfully for acquiring Higher education I moved to Balochistan University where I did my Master of Science in Zoology. Master of Philosophy and Doctor of Philosophy both I did from University of Sindh Jamshoro, Sindh. As an administrator, I started my career as a Headmistress of Govt Girl’s High School Malik Abad Washbod in Panjgur in 2000. Later on, in December 2001, I joined as a lecturer of Zoology in Govt Girl’s Degree College Panjgur. It was really a very pleasing moment for me to be appointed as Principal of Govt Girl’s Inter College Khudabadan on follow-up which later on by efforts of we all got promoted to a degree college. Now this college where I work as Principal is hopefully working well despite of the enormous scarcity that we face.

TBN. Rightly some days back there was a good news of inauguration of a girl’s library in a college premises, is it the first ever library for girl’s in Panjgur?

FH. Yes, this honour and tribute goes to GGDC Khudabadan for having the first ever girl’s library in Panjgur. I think such educational environments in shape of libraries building should be promoted everywhere, these are things which help a society to create a conducive and very product-oriented community. I think this is one of the very educationally historic achievements for girl’s advocating forums and individuals. This library is not only for the enrolled students, other girls can avail this opportunity at evening as well. We are trying to make it available and accessible to every girl.

TBN. As the principal of a girl’s college, how are you seeing the girl’s enrolment ratio?

FH. The girl’s enrolment ratio is not that much bad and disappointing as it is being perceived by majority of us, but it shouldn’t be taken as, the issues are fully overcome. Still we need all to work on it to alleviate it in a level there may remain no girl out of school, college and university. In this College the enrolment is hopefully two hundred and I perceive the future of this college very bright and outstanding. We believe in efforts as a staff and as much effort we put, it will straightly and effectively affect every part of it which would be required to make a college functional and a hub of learning.

TBN. Some years back a terror causing organization tried to target the co-education system in Panjgur, how do you see it, has it brought negative impacts on girls enrolment to institutions?

FH. Yes, a half decade back a challenge was deliberately put on the path of girls education and girl’s education advocating people which attempted to terrorise the people, the students and the parents as well but by the grace of almighty Allah their proscribed regulations and unlawful acts didn’t work and luckily this has not effected the girl’s ratio of enrolment at all. We all should now accept, giving an educated mother means to have an educated generation ahead. Not only this is the need of time, the Islamic instructions allow a girl to obtain education as well.

TBN. Majority of the students after graduation won’t go to attend higher institutions, what could be causes you may sort out?

FH. Yes, this is realistically true. After graduation, among one hundred students somehow a quarter or more than it gets the chance for higher education. There are many reasons behind it, as majority of the students cannot afford going to cities but now this has got in a level changed, now the students are very enthusiastic and many students are even doing their M.Phils and PhDs as well. Actually, in a great extent the sense of apprising the students with beauty of the career counselling and guidance was missing. We have been working on it to guide our students and we hope all institutions will let the students to have a great access to the magnificent benefits and charm of guidance.

TBN. Most of the Girls colleges if not fully but are in some extent dysfunctional, what scarcity does your college face that you may request Govt to be provided?

FH. Yes. This is very much true. Not only Girls colleges, the Boys colleges as well have many issues. But in limited availability of the facilities, we do work and attempt to show zero tolerance for negligence owing to which by the grace of almighty Allah I have entirely overcome majority of the minor issues and our college is functioning in a very optimistic manner. Govt should work on the lapses that colleges are facing, the Girls colleges in particular should be dealt with urgency.

TBN. As usual most of the institutions lack the availability of buses that pick and drop, how many buses does your college have?

FH. Not denying the facts and reality, yes in very disturbing way we have issues of Buses and drivers as well. We have only a bus which is regularly picking and dropping the students. Other two buses are out of order, their tires are badly damaged we cannot approve such vehicles for transportations. We brought this issue into notice of honorable Deputy Commissioner of district, we are hopeful this issue will soon get resolved.

TBN. Girls colleges always scream for lack of teaching staff, how is the situation with the college you are administrating?

FH. The Girls colleges do face lack of the teaching staffs everywhere, as I do. The issues of regular teachers and remuneration-based faculty both are serious issues. Female staff teachers mostly face the pick and drop issues, for which in a traditionally honoured District like Panjgur is a grave issue. The ones who we appointed on renumeration basis cannot carry working with us just because of the wages provision on time. But I as an administrator faced all such problems but now by utilising the college budget and remuneration from directorate, I have entirely solved them.

TBN. What message would you like to convey regarding girl’s education in Panjgur?

FH. I convey this message to girls of Balochistan in particular the ones hailing from Panjgur, at any cost obtain education and consider yourselves the volunteers of district. The importance of education should be enhanced and extended to every girl so that the challenges we are facing may get lessened and shortened by blessing of collaboration. As we all know, there is a secret of a peaceful society hidden in a box of uncertainty, own the area you live in and carry on the message of enlightenment to inhabitants, the educational feedbacks of that area own you later.