Home Articles Madarr and Shelanch; the traditional delicacies of Balochistan 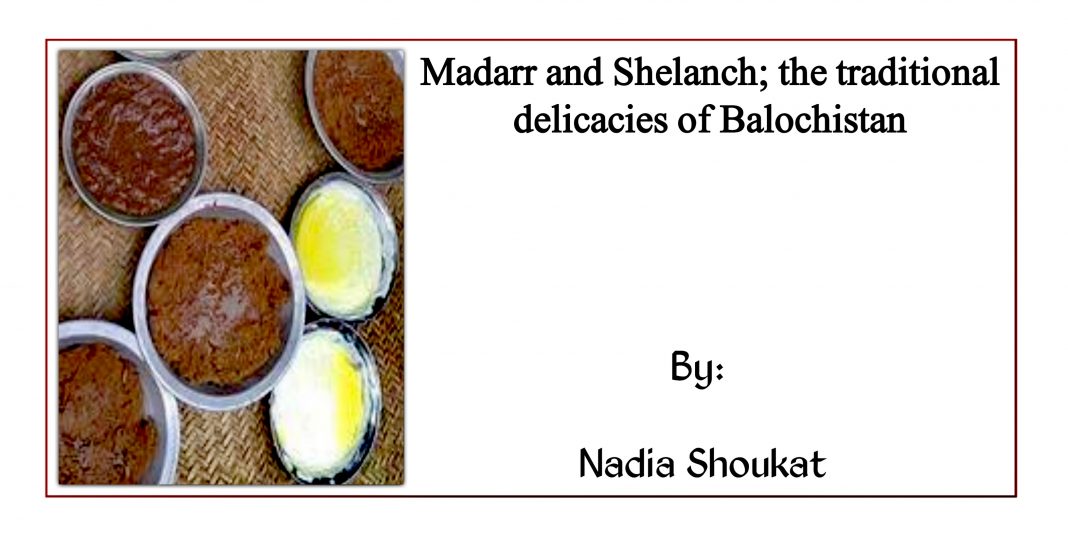 Balochistan is well-known for its natural resources, historical sites and mouthwatering food. Undoubtedly, if one debates over Balochi homemade food, there comes swarm of delectable food which are scrumptiously made by Baloch. Along the side, numerous desserts are made by Baloch females which add pulchritude to the traditional Baloch and their tastes. Among them, two very tasty desserts of Balochistan are Madarr and Shelanch. They are often taken side by side to serve.

Madarr is mostly made by women in homes. Its ingredients are pure oil (sap’en rogen) and dry dates (oshke nah). Initially, dry dates and pure oil are mixed together. They are pasted for almost five minutes till they get mixed. After that, they put the mixture in pin with low flame and cook it to make it fresher. It becomes hot and tasty. Later, for around two to three minutes it gets ready. After that, the most yummy and healthy dessert Madarr is served.

Meanwhile, Madarr is mostly served with another Balochi traditional dessert, Shelanch. Making Shelanch is tougher as compared to Madarr. So, let’s have a view at how authentic and palatable Shelanch gets ready.

At the very first, Shelanch is made either from the milk of goat or cow. Firstly, the cow or goat is milked. After milking the cow or goat, milk is put in a pot and is not touched unless it turns to yoghurt. Then the yoghurt is put in Henzuk (in Balochi language Henzuk is made of skin of goats). Subsequently, the Henzuk is tightly closed and hanged in a stick. It is shaken for one complete hour till it turns to sour milk (tropshe sheer).

Moving ahead, sour milk is put in a pot and is heated till water of sour milk gets finished and it becomes thick, which means it becomes Shelanch. Lastly, with the help of a piece of clean cloth, water and Shelanch are separated. Thereafter, Shelanch gets ready. Enjoyably, it is eaten with Madarr.

Hence, the process of making Madarr and Shelanch was initiated decades ago and still it is continued with particular ways of cooking and extraordinary tastes. All a tourist is to look for when he visits Balochistan is to taste the delicious Madarr and Shelanch at any cost. It will definitely add to the beauty of their visit.