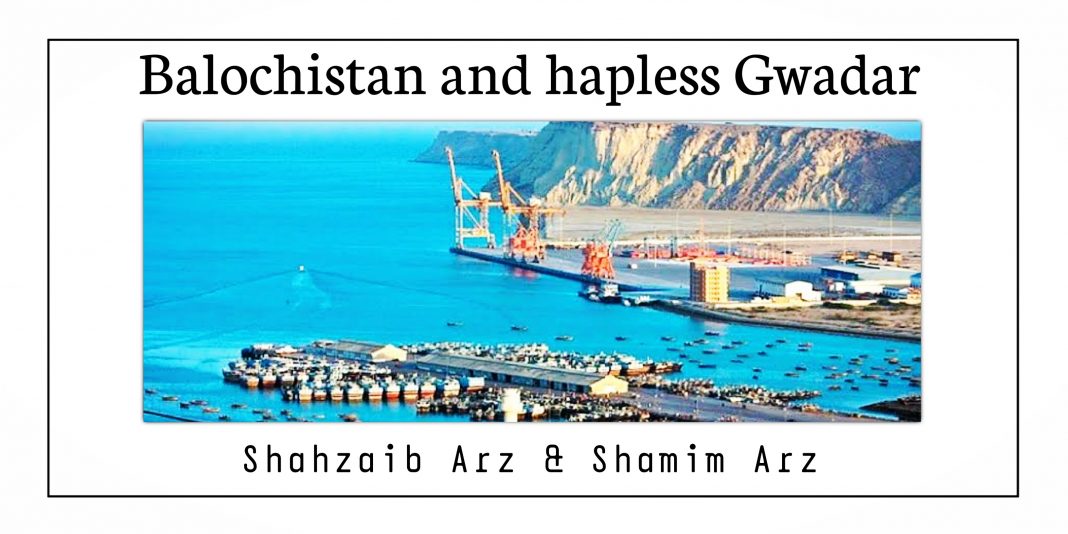 Balochistan is blessed with Saindak, Reko Diq and other blessings, but left behind in development. In fact, the other provinces of Pakistan [Punjab, Sindh and Khayber Pakhtunkhwa] along with the capital city, Islamabad, are enjoying all the natural resources of Balochistan, but the local residents are far away from everything.

On the other hand, Gwadar, the hub of China Pakistan Economic Corridor (CPEC), despite all its strategic importance, is, too, like the other cities of Balochistan; ignored. In spite of spending billions on Gwadar to give the city a new color, it is deprived of the basic amenities.

No “original Gwadari citizen” is ever happy with what the state is bringing for them. Although the infrastructure is getting little bit of attention in the city, but the actual public of Gwadar is left ignored_ I fear they may get homeless in the near future with what is happening right now in the city.

Health and education are daydreams for the CPEC city. There is a building of a hospital, but it lacks qualified doctors. The people travel to Karachi for any small ailment. To a great misfortune, all the CPEC-related development projects are getting done in Punjab, leaving away Gwadar as it has been. Intelligently, the government is working little on some very tiny projects like decorating the only Gwadar highway and making the sole cricketing ground, in their try to deceive the locals of prosperity.

We are getting a new deception in the name of development in education. But, in Gwadar, however, only buildings are manufactured in the name of schools in a failed attempt to make Baloch people fooled.

Electricity, too, is one of the major issues in the “developing” city. A new year is coming but the problem of load shedding in this city yet today does not seems to be solved. It usually poses questions in the minds of people: Punjab is acquiring more benefits by signing an agreement with China in the name of CPEC as compare to other provinces of Pakistan, and Balochistan is getting only 0.01% of it, why is it so if “CPEC” is said to benefit Gwadar?

Evicting the citizens of Gwadar from their own motherland by constructing roads, creating difficulties in the employment of fishermen in the name of dock, banning them from going to sea, and always trying to make fishermen unemployed. The original inhabitants’ lives have become worsened in every aspect. We, Baloch, are always being deceived in the name of development.

The situation has now reached to such a stage that Pakistan has become so compelled that due to lack of concerns, Pakistan has taken this step and decided to close Gwadar for local residents of Balochistan by fencing it.

However, it seems this is a serious move on a conscious and political basis, which will only aggravate the problems of the people of marginalized Balochistan. Since, fencing in the name of security is a pretension. The main point is to cover the land of Gwadar so that the local people of Balochistan should be deprived of their land.

In conclusion, entry in Gwadar may be for specific people in the near future looking at the current situations. By fencing Gwadar, the government wants to build a cantonment which is detrimental to local people of Gwadar and fishermen. Therefore, this serious issue must be taken under consideration in a cautious manner. Otherwise, we will loose Gwadar.