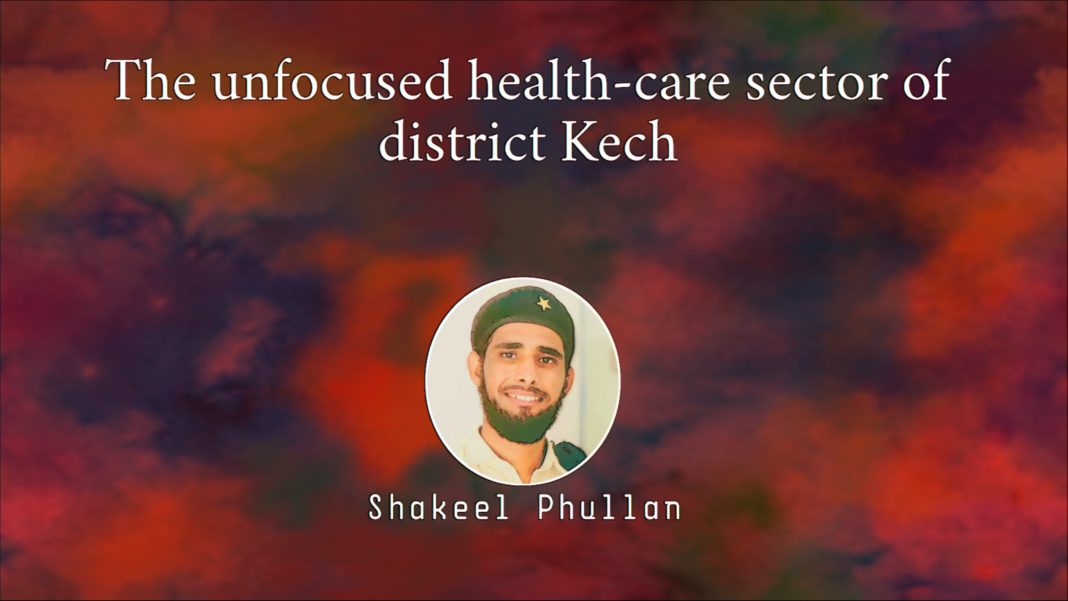 The proper attention on healthcare sector is very essential for the security of humans’ healths from dangerous health-related issues faced by the people. The emerging problems of Balochistan’s healthcare system have darkened the future of multiple patients whose treatments seem risky due to carelessness of doctors, unavailability of equipments, provision of expired medicines, lack of hospitals_ especially in rural areas_ expensive tests and fees seem unaffordable for poor citizens. Dirty environments and multiple other woes are some other issues which have worsened the healths of the people in our province.

Most importantly, the healthcare sector must make some systemic and productive changes to protect the people’s healths and save their lives from harmful diseases and other health emergencies, but currently, it is failed to maintain the most appropriate way to secure the precious lives of the people.

Turbat, positioned as the second biggest city of Balochistan, is undergoing from multiple dangerous issues. Painfully, its healthcare sector seems in peril and its worst condition has reached at harming peak without paying proper attention towards it.

Only in last year, a great number of people have lost their lives by dint of carelessness and weaknesses of Health Protection Authority. As the occurrences of painful disasters_ especially of cylinder explosions_ have brought darkness in the society. Because timely health equipments are a question mark in the city.

However, the unavailability of healthcare’s necessities became the major sign of worsening the health sector of Turbat. The hospitals do lack behind some needed-facilities due to which patients face various kinds of problems when admitted at hospitals for their treatments.

Truly, the doctors are considered our protectors. We have given the responsibilities to maintain their duties honestly and regularly so as to save the lives of affected people. But instead of protecting our lives, they are busy in destroying us and doing business_ in one way or another.

Reportedly, due to careless doctors who give expired medicines have done a great loss to our generation. In some other head quarters doctors are ghosts but they do get salaries on monthly basis without attendance.

Our hospitals exist with the shortage of doctors, good medicines, modern techniques and machines. The people of Turbat are compelled to go to other cities for their treatments like Karachi which is a far cry for the poor patients. This menace must be eradicated from the city as soon as possible; otherwise we would lose multiple other lives in the coming time.

Factually, natural disasters are uncontrollable, but National Disaster Management Authority (NDMA) needs not to show weaknesses during such emergency conditions. Unfortunately, NDMA has failed multiple times as to reach at the spot on time. They have failed to secure lives and properties from painful disasters.

The natural disasters occur naturally in the shape of earthquake, flood, firestorms, collusion of buildings, sudden blasts, aircraft crashes and several more which cause multiple losses and injuries with demolishing the homes and other living things. Turbat is in danger where recently a lot of natural disasters took place with losing a major generation. A great lack of good healthcare enhanced the chances of their deaths.

The firestorms related incidents have been increasing rapidly in Turbat where petrol shops and cars have gotten fire many times with affecting the lives including damages, due to lack of fire facilities. As the fire authorities were failed to approach immediately for stoppage of dangerous fire. In fact, the occurrence of fire-related incidents are very common in city where several precious lives became destroyed and lost.

Shapuk, a village of Turbat which is about 34 kilometers far away from Turbat, faced a serious disaster when a gas cylinder exploded, severely injuring 12 members of the same family. The village lacks hospitals and healthcare facilities especially ambulances to drop them into hospitals in such emergency condition. After the explosion, the victims were brought to Turbat hospital, but painfully the hospitals were not equipped with the required facilities to treat those suffering burnt injuries. So the injured were flown to Karachi by a Pakistan Navy aircraft. Unfortunately, the delay in treating the patients in emergency resulted in the deaths of 10 out of 12 victims.

Apart from losing a major family from Shapuk village, another heartbreaking explosion occurred due to carelessness of people and government’s failure.

The gas explosion of November 28 took a major generation of Turbat that became victimized from a painful disaster when a junk-food shop’s gas cylinder got blasted near Park Hotel with affecting a school van and nearby people. Sadly, 23 people became affected including 13 school-going-students by the incident which had brought darkness in overall Balochistan.

Similarly, firstly the victims were taken to the civil hospital Turbat, due to serious injuries they were flown to Karachi. Sadly, more than 11 victims lost their precious lives. The reason of the increased amount of death rate was all due to lack of burn units and weaknesses of emergency services in Balochistan.

Certainly, the Burn Units with provided-facilities are must for such a major populated city, Turbat. In cases of such disasters the injuries should have easily be taken to the nearest unit instead of taking them to a long way of Karachi.

Everyone is well-aware that the major city lacks proper hospitals and healthcare agency for the protection and medical treatment of such painful disasters as it does not have burn centers yet. When the first cylinder blast occurred, the people had arisen their voices to the ruling government for the establishment of a burn center in the city but till today no one seems interested to taking action on this actionable issue rather as silent as a dead grave. Consequently, such painful incidents have been happening with taking away several lives.

So, I humbly request to the current government of Pakistan including the Chief Minister of Balochistan and health minister to pay full attention on protection of healthcare with construction of more hospitals including Burn centers in every city of Balochistan. The leaders should warn the Disaster Management Authority not to show any failure rather to be always alert to reach at the places of disasters immediately to save lives.

Thus, everyone knows that health is the first success of every individual; if we take proper attention on it then certainly we will survive as ideal and supportive individuals in our country. I expect that the government takes firm actions for the protection of health of citizens including other living things. Everyone should stay alert for supporting and assisting the humanity in the globe.