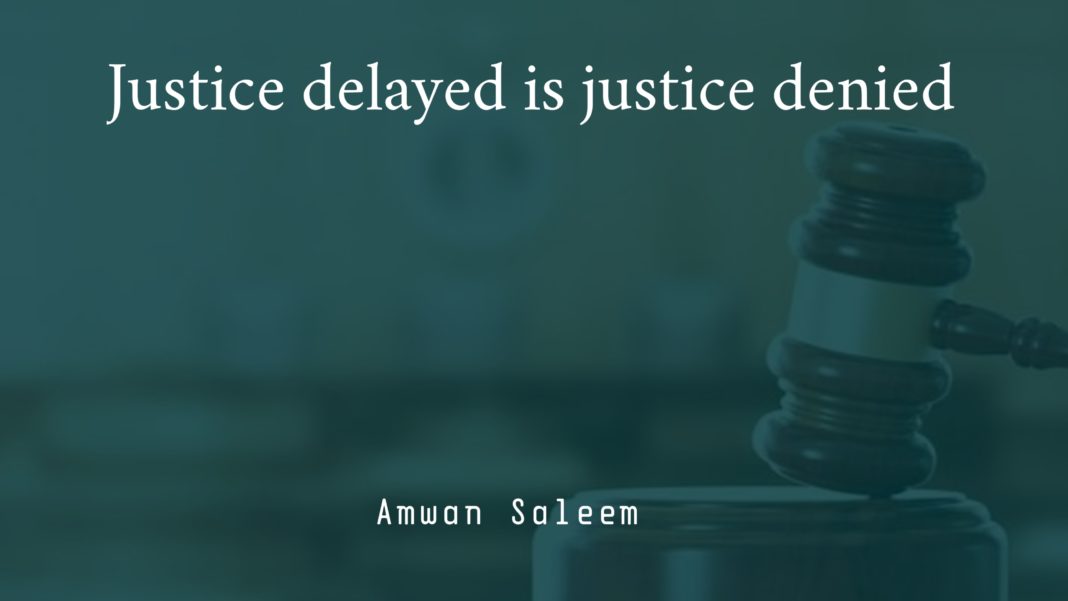 “Justice delayed is justice denied” is a time-tested maxim. It means that if legal reimbursement or equitable relief to an injured party is available, but is not forthcoming in a timely fashion. It is effectively the same as having no remedy at all. The phrase was coined by William Ewart Gladstone, one of the enterprising politicians and Former British Prime Minister. He was a strong believer that justice should be given when needed.

It is perceived that, justice is the slogan of every victim in the society, but on the other hand, its speedy trail and implementation plays a greater role too.

Ultimately, this principle is the base for the right to a speedy trial and similar rights which are meant to accelerate the legal system, because of the unfairness for the injured party who is persistent to the injury having little hope for timely and effective remedy and resolution.

In spite of the fact, justice has become an assembling cry for legal reformers who view courts, tribunals, judges, arbitrators, administrative law judges, commissions, law enforcement bodies or governments as acting too leisurely in resolving legal issues_ either because the case is too intricate, the existing system is too complex or overburdened and most importantly because the issue or party in question lacks political favor.

As a matter of a fact, every poor and underprivileged human being is suffering from severe premises of disparity; world is civilized with blessed resources of nature. But unfortunately, the one who was a prey is still a prey.

Everything in this world has a soaking point after which whatever happens is useless. Similarly, justice should be assisted in a timely manner. If it is carried out later, then it is not appropriate or real justice, which is like a lack of justice. Furthermore, a question scratches my mind that, “How are we imparting justice?” if the judicial hierarchy fails to listen to the cases at the meantime.

Indian judiciary system is a right example that has not adopted the technological changes yet, which still results in pending of a large number of cases. Quoting present Chief Justice of India, Ranjan Gogoi emphasized, over 1000 cases are pending in the court for 50 years and more than 2 lakh cases for 25 years. It was also mentioned that there are 90 lakhs awaiting civil cases, amongst which 20 lakhs are such where even summon has not been served yet, then will not you think it is injustice? If yes! Then we are liable for it.

Lastly, human rights are the key controllers of the modern age and should not be despoiled. Every person, who is a stable believer in human rights, will agree with the fact justice if not given at the right time, helps no purpose and is rather a devastation of human rights.