Home Latest News Mana Lanshoo_reminds us not to hesitate for protection of humanity! 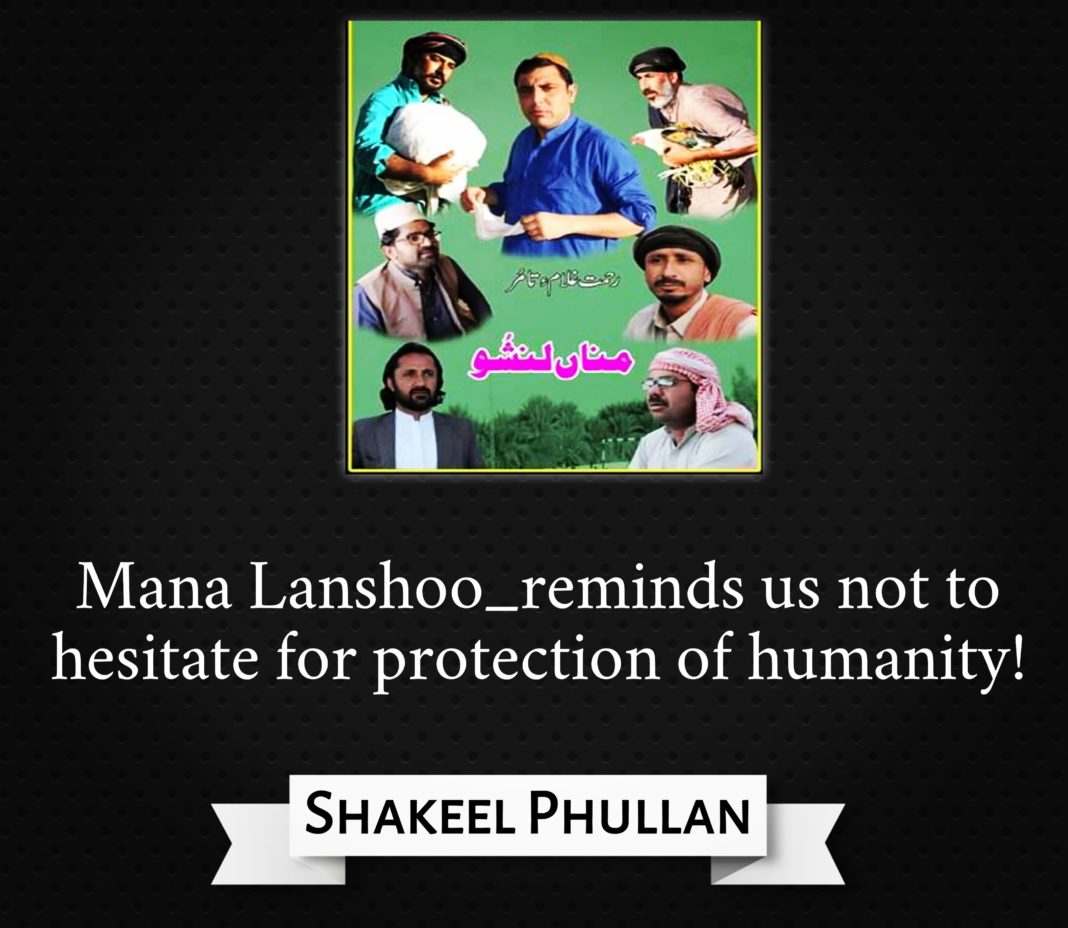 The recent released Balochi film ‘Mana Lanshoo’ is a well-directed and fascinating film that is directed by a well-known director ‘Rhamat Ghulam’ who has impressively represented the movie with the richness of Balochi culture, tradition, language, music and a meaningful message within it. The film was successfully launched and watched in different cinemas across the province. The audiences have attained attraction and pleasure of watching the unique dialogues of the characters. The main characters of the film are, Rhamat Ghulam, named as ‘Lanshoo, Zahoor Fazal (Ghani Baksh), Noor Hussain Kamal (Sayad Gazzi), Shakeel Khair, Altaf Fazal and etc who performed uniquely.

The film reminds us to stay active and united for the removal of the worst culture of cruelty, injustice and inequality in our society. It tells us to implement positive acts to be supportive and cooperative with each other instead of pulling down the legs of the people. In fact, everyone needs to feel free to love and support the humanity for a peaceful and prosperous society. The film, too, reminds us the unconditional love and carefulness of the beloved ones, as their absence and remembrance make one helpless, sleepless and restless in entire life.

The movie begins and ends with the son of Sayad Gazzi namely ‘Lanshoo’ who visits different places and meets strangers with discussing about numerous events and issues of the society such as the culture of inequality, injustice and carelessness of doctors. The two main characters namely, Sayad Gazzi (Lanshoo’s father) and Ghani Baksh, (Lanshoo’s uncle) seemed fed up of Lanshoo’s activities as Lanshoo always told the realities and wanted to provide awarenesses about the inappropriate activities_happening in the society.

Lanshoo’s father was always in search of a proper job for him and Lanshoo always wanted to work honestly and properly. He always said that shame on those people who are involved to destroy the society with their bad deeds. He was taken out from jobs by the greedy owners and he always uttered, “Lanshoo never works at those places where clothes are more valued than the human beings.” Because he seemed responsible and honest with his work and always thought that ‘Equality for all, no discrimination at all.”

But, the fearfulness and threats had entirely stopped Sayad Gazzi to speak up and he always forbade his son speaking up what actually was happening. But Lanshoo never felt afraid of anyone and supported the humanity. Once his father became angry and left Lanshoo to do whatever he wanted. Lanshoo went to a major city and found a job there. He was unseen for a decade. Lanshoo’s father became totally sad as that distance brought sadness, and loneliness for him who wished that Lanshoo were at home. His father only cried and prayed that his son would return home safely. After some years, Lanshoo returns home and feels how unbearable it was to live far from parents. Sayad realized that everyone should feel free to love, care, support and encourage the human beings to do the right deeds.

However, it explains how a father deeply regrets about the done activities and awaits for the arrival of his beloved son though he was a problem for the parents. The unconditional passion is always felt under the absence at every moment. Lanshoo knew that the universe seems full of ups and downs, pains and hardships, pros and cons, but everyone needs to face and overcome them.

So, Rahmat Ghulam’s extraordinary and praiseworthy contributions deserve a lot of appreciations for freeing up his creative and logical thoughts for everyone. The attractiveness of his films have successfully described him with elaboration of his emotions and feelings about the firm relationship with the motherland, humanity, Balochi language and culture. He always guides the humans to remove their misconceptions about minor issues which cause unreasonable conflicts within the society and suggests us to move towards the right path in order to live comfortably and peacefully. He has always been an awesome actor and a great actor too. Baloch society feels honor having people like Rahmat Ghulam around.