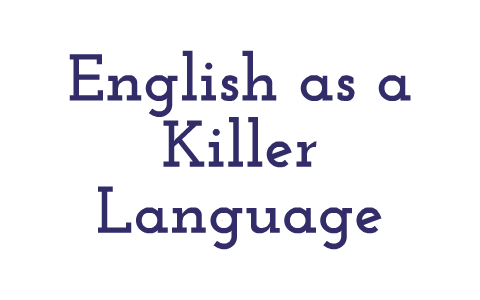 The most echoed words and lines by the most learned people are always based on saving the language and the literature. Peeping back to the romantic, Victorian ages, the statement becomes vague that language should be protected and honored. In order to save a language, it is compulsory to write in that language. Many languages have vanished because no literature was produced and there was nothing to be saved.

There are languages like Greek, Latin, that cannot be understood without English translation. Living in the 21st century, people are able to keep  a record of the ages and history due to the people who saved the language in old days. It is nonetheless, a misconception that English is the miracle which can rectify anything or perhaps it is a measurement to measure one’s ability.

In all the journey of race and competition, people have lost the lexeme, morphs or morphemes or the grammar of their own language. English language, being the super language of all languages, has killed many languages as the people have given more priority to English rather than improving the mother languages.

Today, English is the international language, people find it easy to communicate and share ideas, and it is also the economic backbone of every country.

It is a painful aspect of our society that parents have quieted talking in Balochi, Brahvi, Sindhi language and teaching their kids to communicate in English language. The kids cannot even answer in Balochi, but they reply by using English words that is quiet pitiful. In contrary, this act is considered as the level of intelligence and advancement, but it is the lowest level of arrogance. It is very hard to find a document in Google regarding Balochi Linguistic. No one is taking heed of the beautiful languages of Balochistan. It is needless to state that we are the misfortunate nation to ignore the Balochi and Brahvi languages. In this age, everything is a blended version of the vice versa. It is mostly practiced in Balochistan that children are being told to talk in English. In some cases, they are strictly prohibited not to talk in Balochi. People write in English, Urdu and now in Chinese, but they are unable to understand that this activity has subsided the existence of Balochi language.

English language cannot be only responsible for ruining the other languages unless it leaves huge impacts. It has highly influenced the people in a way that they think it is just now a matter of DO or DIE. Besides this dilemma, now Chinese language is prioritized after English language. There is a brawl between the both languages. In the entire Balochistan, neither Balochi is a compulsory subject nor Brahvi in Schools. No one even knows what the inflectional morphemes of Balochi language are and surprisingly there is no data relevant to it on internet too.

Up till now English has killed many languages and according to the researches of linguists, another language that is going to be killed is Brahvi language. It is a devastating fact that very less literature has been produced in Brhavi language, there are very few books, novels, and magazines. Balochi and Brahvi both are the extinct languages in the list. English can be a language to be acquired for the means of communication, but it cannot be so important. Instead of prioritizing the English language, one should write, read and save one’s own language before it is too late. English language has undoubtedly manipulated the linguistic and cultural values of every language.