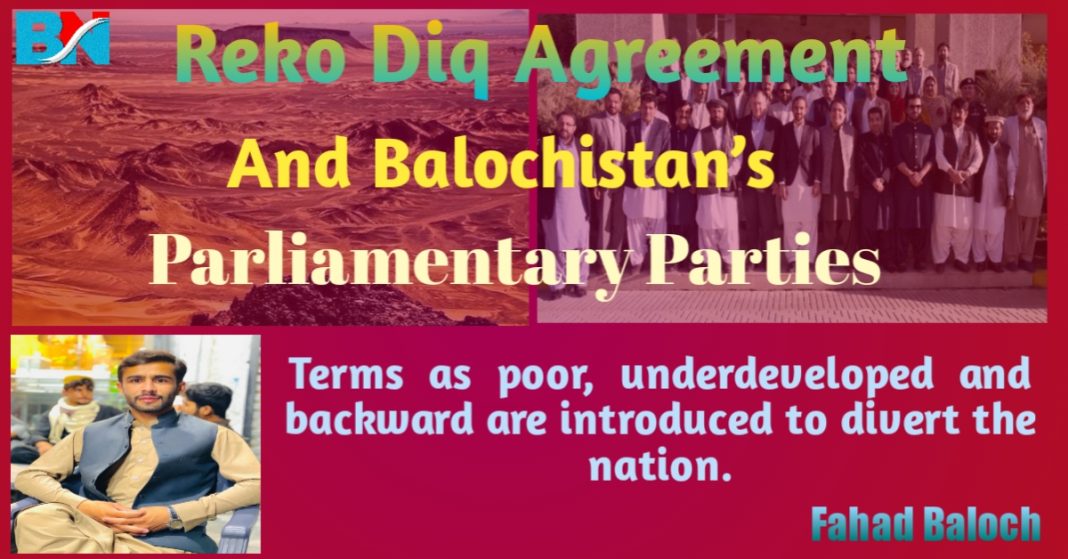 In a state or nation, trade, business, import and export, companies and the industries work with the will and consent of the masses. All the other forms, other than the mentioned, are considered as exploitation, snatching up and plundering of the national wealth of that nation forcefully, which is labelled as deception over the rights of the people.

Baloch nation is living in the mineral-rich land, although counted as the most backward, poor and corrupt region. But in the twenty-first century, they are facing the dire dearth of prerequisites of life. Baloch are going through the harshest phase of life as the recent circumstances of torrent are its instances where Baloch were out of all sorts of life-saving necessities including clothes and shelters.

No one, other than few, was there to help out or to assist them. Those few felt the real pain and realised that it was the need of hour to shoulder their people including a student organisation Baloch Students Action Committee (BSAC), Baloch Raaj in D.G Khan, Baloch Yakjehti Committee (Karachi) and some native civil-societies who tried their part as per their competencies to work in order to help out the flood victims.

Coming to the point, Baloch are not poor from what they possess, neither are they underdeveloped nor backward, but are intentionally pushed towards such terms under a conspiracy to further the brutalities and rule in the region. Such terms are merely introduced to divert the nation.

Though, Baloch land is full of energy and all types of natural resources including land and air routes and, most importantly, the warm water, where all the world has eyed in to reach out following the important sea route touching to the Strait of Hormuz, bordering the gulf and the African territories. But the war on water continues.

The recent deal on Reko Diq reserves is the legacy of that plunders practiced from day one of the annexation, as is the case with other such territories of the globe. Reko Diq, as state draw efforts to plunder with a Canadian company of Barrack Gold Corporation, is an attempt to gain a purse of income for the parliamentarians who, in one or the other way, deprive its direct benefits to the Baloch people.

Not only Reko Diq, but Saindak, Chamalang, valuable stones like marbles and other resources, including the Gwadar, Jiwani and Gaddani ports, have been handed over to the exploiters by the ordains of such ‘exploitative parties’. This is how Baloch land is under an evil’s eye of plunderers.

The nominal nationalist parties in the parliament, be it in the federal or provincial, have been down to earth before their masters to accept any ordain given them. For their personal shares, they are observed using the Baloch-card and not for the interests of the nation. The recent act is a clear proof of how they prioritise their personal gains, where some parties were claiming that the Reko Diq deal was a “deception over the Baloch rights”. But after being funded with further 10% of share, they agreed to bargain Balochistan’s reserves.

Undeniably, these parties are doing the same every time. When their share is less, they speak of Baloch. But when they are given more shares, they forget every misery that Baloch are suffering from and deem themselves as the representatives of Baloch. And under the back of the nation, they sell the honor, the reserves and the lives of Baloch.

Under the given prospectus, Baloch nation has to realise and categorically reject such parties, because they have a clear stance of providing a supporting hand to the exploiters of the Baloch rights and land.

The Reko Diq has been an advantage for all parliamentary parties, where brother of Sana Baloch (leader Balochistan National Party-Mengal in the Provincial Assembly of Balochistan) and Senator Sadiq Sanjrani are case laws present in the “Balochistan chapter of corruption”. As recently, a Baloch journalist, Akbar Notezai mentioned the corruption scandal of Raziq Sanjrani (brother of Sadiq Sanjrani), and in return, he was awarded a legal a notice of defamation. Akbar is pleased to legally go with the case with the required proofs.

Although, Sana Baloch claims that he will challenge the agreement, but when his own brother got a chance to be a contractor, he, too, froze his feet. This is what happening with Baloch by the so-called nationalist parties in the parliament. But again, it is testing times for us as a nation that how we accommodate them to deal with the national assets without our consent.