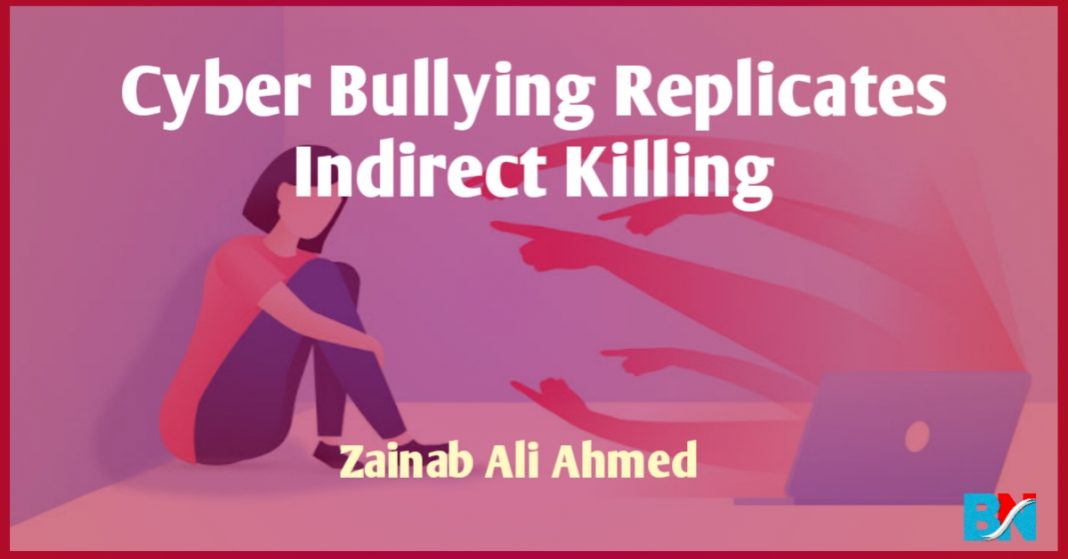 Share on Facebook
Tweet on Twitter
Cyber bullying has the highest reports in social media. In several social media platforms like YouTube, Facebook Snapchat, TikTok and so forth. Cyber bullying stands as a trend for evil-like people that literally ruin lives of multiple people. The irrelevant acts of some people on social world directly or indirectly harm the local users due to this one day or another new suicide cases and more users of alcohol are highlighted.
Similarly, the victims of cyber bullying cut off themselves from this world because of which not only their family, society or people in their environment suffer but also one nation will sink into the darkest and harshest well of problems. Time and again innocent people get stuck among threats of cyber harassment or online bullying eventually enhancing more people to experience mental health issue. In the given series, more youngsters will generate a desire to drop out from their schools and other educational platforms as well as they suffer through other internal and external injuries.
Almost each victim of cyber harassment has been bullied through several ways like being pranked on cell phone, receiving mean texts or IMs from someone, their cell phones have been hacked, their secrets or rumours have been revealed or spread online and they have been hurt and tortured through other ways.
Unfortunately, most of the time when an individual is bullied online, it is either one of their close friends or relatives. Through research, it is known that people on YouTube are mostly cyber bullied at 79 percent, whereas on Snapchat its rate stands at 69 percent followed by TikTok at 64 percent, Facebook at 49 percent and it is also quite high in Whatsapp groups. Among all, children at age of 9 to 10 are cyber bullied on several online gaming spots and people at ages between 13 to 16 are victims of cyber harassment on other social media apps.
Wholly, over the entire globe, the rate of cyber bullying has reached to the highest peak. India is the country with highest rate of cyber bullying at 85 percent estimated in 2022. 59 percent of teens have been bullied online in United States. Cyber bullying is at 20.1 percent in New Hampshire: its rate in Alaska is at 19.4 percent; in Lava it stands at 18.6% and its rate is quite high and above 17 to 18 percent in Michigan, Maine, Montana and Arkansas. Overall, in India, Brazil, and in the United States the statistics stand above 65 percent.
Further, in Pakistan, the Prevention of Electronic Crimes Act was introduced in 2016 in order to curb online offenses. But still in 2021 about 4,441 online harassment complaints were reported to cyber harassment in Pakistan. Even PECA has given strict punishment for cyber bullying. Therefore, in Pakistan if one spreads wrong information about an individual, he will be prisoned for 3 years and he has to pay fine of 1 million rupees. Unfortunately, still 28 percent of women report harassment, while most of other do not report because they feel embarrassed.
All conditions clearly witness that people must end conservatism from their mind and take strict steps to finish cyber bullying. As nowadays parents handover mobile phones to their children at very early ages and they do not even bother themselves to check out what acts their children are doing. As a fact, girls are more likely to be victims of cyber harassment than boys.
Cyber bullying not only dominates an individual, a society or nation, but proves them dead even when they are all alive.
Facebook Comments